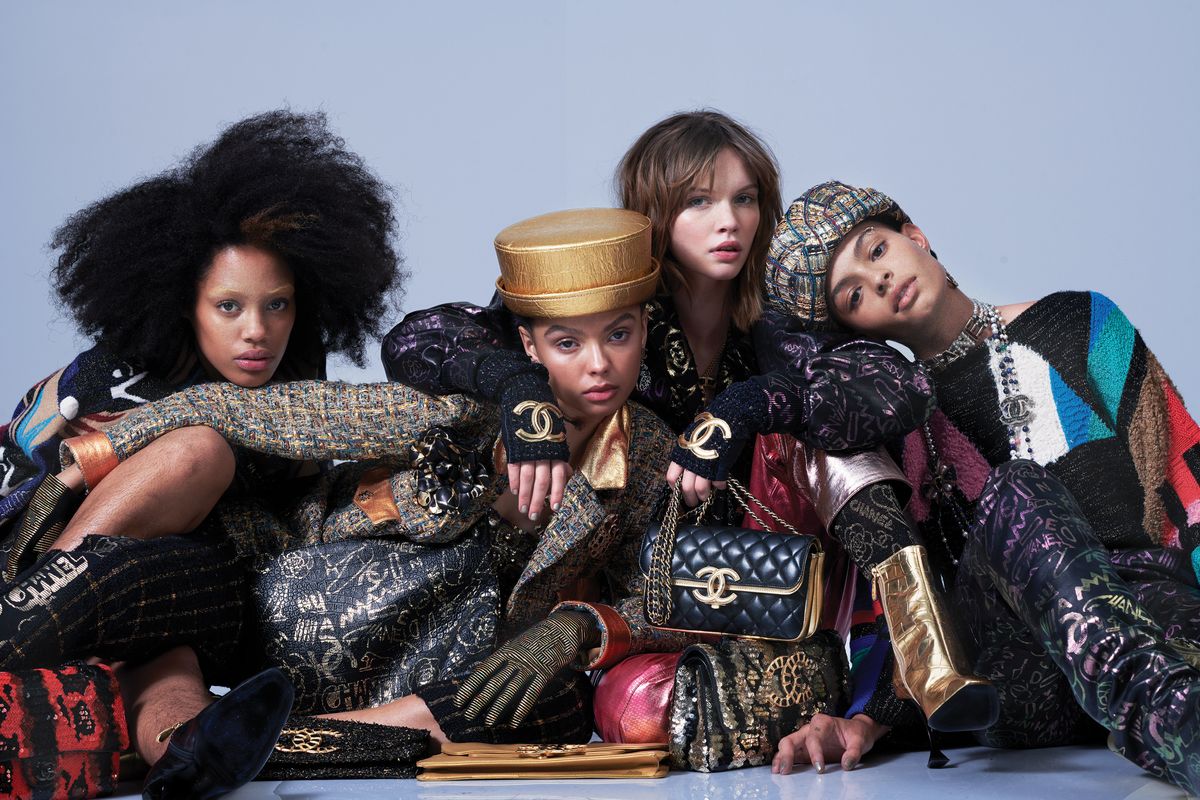 4 Models Rising Through the Ranks in Fashion

Swinging chain-strap bags to thumping New Order synths and '70s soul, a troupe of fresh faces is dancing, posing and jumping in time to old-school beats. Decked out in Chanel's latest Egyptian-laced Métiers d'Art collection, one of Karl Lagerfeld's last for the brand — and the final show in which he could be seen taking his signature bow — before his passing this past February, rising models Ajani Russell, India Graham, Ke'Andra "Coco" Samone and Faith Lynch sport sparkling scarab beetles (symbols of rebirth unifying the past, present and future) and every shade of burnished, crackled and, in the house's words, "flamboyant, almost disco" gold. Gaining as much attention for their multi-hyphenated skill sets as for their fashion bookings, this new crop of future-focused models — a musician by night here, a skincare buff by day there — is redefining what "camera-ready" actually means for Gen Z.

"I don't actually have a moment where I remember being starstruck, even with Cindy I wasn't," says 19-year-old Faith Lynch, who was discovered just a few years ago at a Wiz Khalifa concert in Houston. And that "Cindy" to which she refers is none other than the bombshell supermodel herself, Cindy Crawford, who Lynch spent four days on a beach with while shooting a campaign next to Crawford's daughter, Kaia Gerber. Lynch's chilled-out demeanor is only enhanced by low-key wellness rituals like candlelit baths and thoughtful breath work. "I meditate every day before I go to sleep," she says. And though she has dabbled in acting auditions, her side-gig as a singer-songwriter is gaining momentum. During fashion week, she performed at NYC venues and says that after singing a cover of Dolly Parton's "Jolene" followed by her own song, "I got off stage and bawled my eyes out for like an hour and a half, it was overwhelming. They were happy tears, nothing but pure joy."

At 21 years old and with four gems twinkling in her teeth (secured by friend @_sassycilantro_ with dental glue) under a set of bleached brows, Ajani Russell has already led a bit of a charmed life. While the New York City native was attending LaGuardia arts high school, a friend told her to swing by a shoot directed by "a really cool girl." That photographer turned out to be Petra Collins, who immediately saw potential and started casting Russell for projects like Cardi B and 21 Savage's "Bartier Cardi" music video. Similarly, when she started skating at 17, she couldn't have predicted that her real-life crew of girls on boards would ultimately inspire last year's feature film Skate Kitchen. But it's art that sits at the "tip top" of her priorities, leading her to L.A. two years ago to study at CalArts with sculpture, graphic design and classes bearing heady titles like "Mindless Pleasures" on her schedule. And she already has a solo show at a Chelsea gallery under her belt. Russell's next project? Making Jell-O molds out of tiny plastic hot dogs she found at a 99-cent store. "I'm going to put them on these metal plates that emit sound waves at a certain hertz so it makes them wiggle."

"Basically, it was like my dreams coming true," says Michigan-born India Makailah Graham of sharing her initials, I.M.G., with the agency that signed her from a scouting contest. Naturally, Graham respects the laws of attraction. A "big believer in speaking things into existence," Graham booked one of her first-ever shoots back in 2017 with Adwoa Aboah and Pharrell; she talks about idolizing the model-activist and how the mega producer "used to be my phone background." Graham is focusing her energy toward the beauty scene now. As she pulls out a carry-on filled with Ole Henriksen serums, Supergoop mists and Caudalie elixirs, it's clear that her notoriously luminous complexion is already a study in skincare. "That's where I really want my career to go, I want to focus on beauty," she says. "I'm really big on my skincare. I use serums — I love serums."

The most remarkable part of catching Ke'Andra "Coco" Samone in action is finding out that this industry pro, a vision of regal grace and quiet confidence, is just 16 going on 17. With a makeup artist for a mother and a creative consultant for a father, it's unsurprising that the ingénue found her way into the modeling industry. "I loved being in front of the camera," she remembers of her early days growing up in North Richland Hills, Texas and modeling for commercial brands, eventually moving into acting six years later at the wise age of 12. Thanks to a guest spot on HBO's Veep and a director's cut cameo in the blockbuster A Wrinkle in Time, Samone is already making ripples in the film industry. Still, she counts her first MAC campaign, which she starred in with her mom, as her favorite project. "We modeled together, so I always hold that one dear to my heart. I loved it, they flew us out to New York and I was so happy." Now living in Harlem full time, Samone is finding her stride (and becoming "a nap person") in the city that never sleeps.