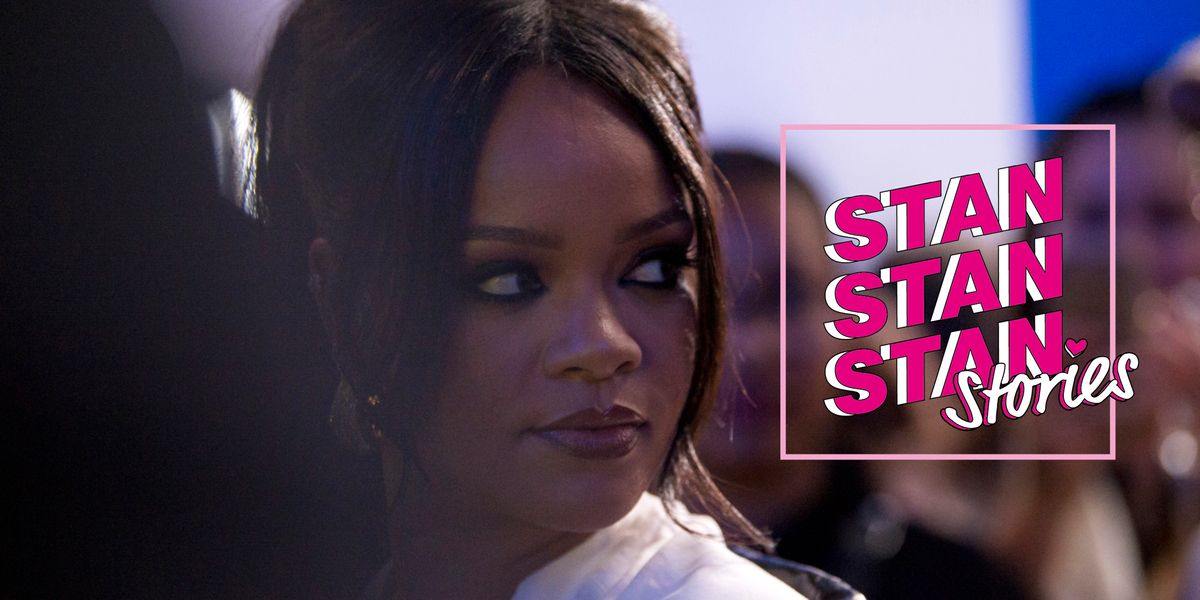 The queen of music, fashion, beauty, and Instagram, Rihanna is one of our most powerful cultural icons. Breaking out in 2006, her star has risen higher year by year — and with an unrivaled IDGAF attitude, she's always advocated for inclusivity and change within the various industries she moves in.

Throughout her evolution from pop star to legendary businesswoman, the multi-hyphenate has never lost the love of her loyal following, AKA The Navy. Matis, a French Navy member and founder of the updates account @TeamOfRihanna, has been stanning RiRi since 2006. Matis shares Rihanna news with over 120 thousand followers around the clock.

To celebrate her recent crowning as the world's wealthiest female musician, PAPER DM'd him to find out more about stanning one of the baddest gals on the planet.

When did you first become a Rihanna fan?

Had you heard her name before?

No, I was nine, and she was not that popular in France yet. She only had one hit single here, "Pon De Replay." I remember I was in the living room and my brother told me, "Look at her, she's so beautiful." Indeed, I was stunned by her beauty and the song was catchy AF! Then "Unfaithful" was released and I loved the song as well, then came "Umbrella," and the rest is history!

How were you following her career at the time?

Before the boom of social networks such as Twitter or Instagram, there were a lot of fan sites. I spent a lot of time on these fan sites and forums reading articles about her.

Do you still keep up with some of them?

I remember my parents used to give me some limited access to the family computer, so I was always excited to go on these fan sites and check if there was some news about Rih, like new music. Most of these fan sites are now closed, probably due to the arrival of social networks.

According to @MirrorCeleb, Rihanna rented the Osea island in England to record her 9th album. "The state-of-the-art… https://t.co/s1jnhKiK9Q
— Rihanna News (@Rihanna News)1559681361.0

Was that what led you to create an update account?

Totally. I created a first account on Twitter in 2010 when I learned that Rihanna created one. Then I created another one a year later, and I started to post some news/photos/charts about her. I started gaining followers with these kind of tweets and I decided to make my fanpage a "professional" page only. That's how @TeamOfRihanna was born.

I'm really interested in how stan and update accounts gain such a mass following on social media platforms. Was there a method you used in order to attract so many followers?

I created my account in the early days of Twitter. I even think I was the first Rihanna account to post news without having a fansite. I also chose to tweet in English only rather than in French to reach more people. So I attracted a lot of followers through the years. One advice I would give is to gain credibility among your followers. If they trust you, if you seem reliable your followers will increase. That's why I tried to remain "professional" and tried not to answer to the haters or people from other fanbases.

Would you say you say Rihanna stans get hate from other fanbases?

Not only the Navy only — every artist gets hate from other fan bases on Twitter. Stans are rude, but stans are funny as well! I think we shouldn't take comments from the stans too seriously. I consider myself a stan btw, except I don't tweet "Rihanna outsold" or "Stream Rihanna!!!" under every other artists' tweets, lmao.

Ugh, that's always the worst. What has it been like watching Rihanna delve into other business ventures, such as makeup and now luxury clothing?

I'm so proud of her! I literally grew up with her. She was 18 when I first saw her on my TV, and I was nine. She's now 31, and she has accomplished so much! I just learned that her fortune is now estimated to 600 million dollars! That's insane, she's now a real businesswoman, and I feel proud, like she's my sister or my friend. It might sound weird, I know. But to be honest, I fell in love with the singer, so I can't wait for her to return to music!

No I totally feel that. I feel like a common misconception about stans is that they're kind of crazy. But really it's just a super strong connection that's formed, even if you haven't met them!

That's true. We often blame social media, but it's also a great way to get closer to your idol and a great way to meet new people. I've met a lot of people on my fanpage, online or during concerts. I think there is a strong sense of belonging when you're in these fan bases, you feel proud and you automatically want to "protect" your territory and your leader, who is the celebrity.

What has been your favorite project Rihanna has done?

The release of ANTI was truly a moment. There was so much anticipation around the album, when it dropped I remember exactly where I was. I still don't know how she's going to top this album with #R9, but she probably will, as always. The launch of FENTY two weeks ago was also special. I live in Paris, so I had the chance to be with her inside the pop-up store for a night! The release of such a brand under LVMH is a huge milestone in her career, I can't wait to see what she has in stores in the future. But I need an album first now!

What's your favorite song from ANTI? If you're able to choose one!

I can't choose one, but it's a tie between "Kiss It Better" and "Love On The Brain," "Same Ol' Mistakes" is definitely top three!

This is a Rihanna related tattoos appreciation thread! Drop your pics below 👇👇
— Rihanna News (@Rihanna News)1559058058.0

Tell me about more of your favorite Rih moments.

Every time she releases new music is a moment you cannot forget. I remember every day, where I was, with who, for every lead single release. Also there are several red carpet moments I'll never forget, like the CFDA with her Swarovski crystals dress, or the 2015 Met Gala and her yellow dress. One of my personal Rih moments was when I was invited to her Fenty Beauty launch in 2017. It was the first time I was that close to her! I "met" her at the FENTY launch, but I didn't have the chance to talk to her, even though I was literally one meter from her.

That must've been so exciting! I have to admit that I'm jealous. Take me back to the moment of being invited to the launch, what was that like as a stan?

I received a private invitation on a Tuesday for Thursday night. They said in the email there will be several influencers and press members, but I was almost sure Rih would be present. It was in September, the first week of school, but I couldn't miss that opportunity! So I booked train tickets and went to Paris. I only received the address a few hours before the event. We were only five fans invited to the event, all the other people were influencers and journalists. I felt privileged, I drank a few drinks of Armand De Brignac champagne and then Rih came. It was so cool because it was not like a concert where fans are screaming and pushing people, people were relatively calm. As a stan since 2006, I thought that it was like a "reward" or "recognition" for the work I do every day. I felt very honored.

That's amazing! Did you end up getting anything?

My goal is to have at least one pic with her before I die. I'm sure I will someday. The only thing I got that night was a bag with some Fenty Beauty products and some videos of her drinking shots at the bar!

Related | How the 'Black is Beautiful' Movement Inspired Rihanna's FENTY

A lot of musicians, Kanye West being a big example, have delved into fashion. But she has had way more success than all of them. Why do you think that is?

Rihanna has always been into fashion. It might sound cliché, but she is setting the trends rather than following them. She has that credibility and authenticity in this field that some others don't have. She is bold, and that's why her style is so unique.

Obviously there was a lot of drama on my TL when she was spotted again with Chris Brown in 2012/13. My TL was on fire. I remember some fans were burning CDs of Rihanna. About the VMAs moment with Drake, I remember staying up the whole night to do live coverage. That moment was cute, but I felt like it was more of a summer love. Now it looks like she has a "real" boyfriend, and I also like the fact that they're not exposing their relationship.

Can you take me back to the initial media boom when the picture of her went viral after the Chris Brown attack?

I don't really like to comment on that story, but of course I was shocked like everyone. I was young and barely on Internet at that time, I've heard the news in the tabloids.

How would you describe her relationship with the Navy? Especially with so many people being starved for new music.

What I like the most about Rihanna is that she seems accessible and that's she's so down to earth. You would think that due to her icon status she would feel superior to us or her entourage, but she takes time to answer our DMs on Twitter and Instagram. You can DM her about something personal and she will take time to write you something, she's very humble and I love her for that. Even though I know she might be annoyed sometimes by us begging for this damn album every second in her comments!

You can find me in those comments! If you were stuck with one Rihanna album for the rest of your life, what would you choose?

Definitely ANTI. This album is a masterpiece. No skips. I even got an "anti" tattoo in braille on my ankle. Wait, maybe I would choose #R9 instead, but not sure which year she will release this album.

Being such an influential and powerful business woman/musician/cultural icon, what do you think Rihanna has up her sleeve for us next?

The album is definitely coming this year, so a tour might be coming too in 2020. Maybe Fenty Skin or Fenty Furniture is next.

Will you stan Rih forever?

If one thing is for certain, it's that stanning Rihanna is never boring. I could not imagine my life without Rihanna, so I'll always support her no matter what. In 20 years I'll be proud to tell my children I had the chance to know Rihanna at the very beginning of her career.