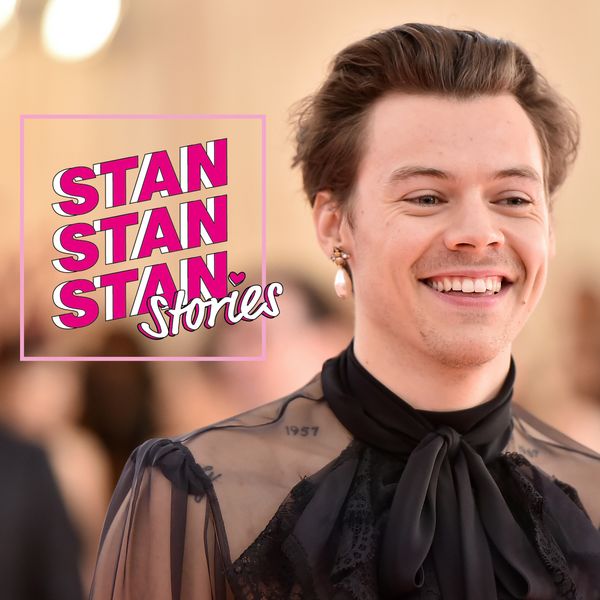 Harry Styles has been a household name since he tugged on millions of teenage heartstrings as a member of One Direction. The group was infamous for having the most dedicated and wild fans, who were always willing to defend the boys and their endless discography of ballads and bops. No matter how hard you try to deny it, we at PAPER know that everyone still has at least one go-to-song by 1D.

After the band took a hiatus in 2015, Harry began his own solo career: releasing his first album (self-titled, of course), going on to star in the movie Dunkirk, and just recently co-chairing the Camp-themed Met Gala. PAPER caught up with Harry Styles fan account @OfficialWithHES and owners Joana, Liz, Praise, Océane, and Juliette to chat about what it's been like following Harry from boy band member to Gucci-clad cultural icon.

Praise: Joana wanted to update fans on what Harry was doing, either as soloist or with the group. All of us joined in different times, in order to help out. And we've been doing this for years, since 2016. We all got to know each other through Harry, online.

Where are you all based?

Praise: So there's Joana and Liz, both in the USA. Océane and Juliette in France, and I'm in Malaysia. We're all about the same age too! 20-22.

Five people is a lot for one account. How does it work?

Praise: Ah well, we have a group chat on Twitter. Since we are all in different time zones, all of us usually work separately, but at the same time, together. So for example, if one of us or most of us are unavailable for updates when Harry is on tour, we'll make sure that we at least have a member that is available to post updates. Even if it's just for a couple of hours. Then we can automatically switch when one person is available and the other has to go off. It's honestly a team effort!

Océane: If we ever need help, we text another each other and one comes to help or take over. Juliette and I know each other IRL, we've met a couple of times already. As for the others, we've never met before; we get along really well though!

How do you keep up with Harry, since you are an updates account? Are you following him on a day to day basis, or just for big moments?

Océane: It's a day to day basis. We have been doing this for years so finding things and keeping up with him both have become easy for us.

What were your reactions when 1D split up? Were you excited that Harry was going to start making solo content without the other band members?

Océane: We were kind of expecting One Direction to break up at some point, so our reactions were pretty much the same: sad it was over but happy that they would be doing their own stuff. They wouldn't be a band anymore but would still give us something. As for Harry, we were excited and nervous, although we didn't know what to expect from him!

Take me back to the moment that you heard about the break up.

Praise: Oh well for me, I was at home when I heard the news. I wasn't as shocked or upset as I was when I heard Zayn left 1D. It was expected that they would more or less go on a hiatus one day, it's just that we didn't know when it would happen.

Praise: Yeah! Especially for me since I'm from South East Asia and 2015 was the only year 1D toured South East Asia. So that tour was my first time seeing all five of them on stage, and for Zayn to leave the week after was really devastating.

Was there a moment where you were just like, "This is why I stan Harry for Harry" outside of his One Direction fame?

Océane: Yes, when he gave his hair to charity and during his tour, when he raised money for different associations! That's one of the reasons we knew why we stanned him for him!

Would you be happy if One Direction reunited? Or is it like, you can't repeat the past?

Praise: Yeah definitely! We'd love to see them return one day! Whether it's for a reunion tour or a comeback like what Backstreet Boys are doing right now! It would be so nostalgic if that happens one day!

What are your favorite songs they did as a band?

Océane: They're mostly from Four and Made In The AM ("Spaces," "Where Do Broken Hearts Go," "Hey Angel," "Temporary Fix," etc). We also have favorite songs from Take Me Home!

Ugh, Take Me Home was the album of my middle school days! What are your favorite songs off Harry's solo album?

Océane: TMH is definitely one of their best albums! As for our favorite songs off his album, I like "Carolina" and "Only Angel," Praise likes "Kiwi" and "Woman."

Related | Stan Stories: The Ups and Downs of Loving the Jonas Brothers

That's really awesome. I feel like especially with Harry Styles, the fan base is so involved with who he is and his entire journey throughout his career. What might outsiders not know about the fan community?

Océane: Oh yes we have to agree on that! Outsiders might not understand some words from the fan community, words they use online everyday, or even understand what it's like to follow someone's career and going to a lot of concerts from the same person. They usually think that it's the same show, but the atmosphere, the people, the crowd in general, aren't. Everything is different!

Praise: There's definitely divisions within the fandom. Solo Harry stans are called Harries or Stylers. They live and breathe Harry only. Although some might argue that they don't quite like to use that word to describe themselves. So 1D fans/stans are called Directioners. Niall is Niallers, Louis is Louies. Zayn fans are called Zquad. All five of us girls on this account are still Directioners. I think we always will be even though we now run an account that's Harry based but we still love 1D.

I'm curious what you thought about Harry's look at the Met Gala. Some people love how he incorporates fashion as part of his image, but others miss the "good boy" image he used to have back in 1D. What are your thoughts?

Océane: We loved his look for the Met Gala! It's Harry-like. Everyone changes the way they dress throughout their lives, so it was not surprising to see him in something different, but at the same time it was so him.

Have you ever had any interactions with Harry, online or IRL?

Océane: Juliette met him a few years ago! Praise and Joana nothing IRL or online. Not sure about Liz! As for me, I met him and had interactions with him IRL during his OTRA and solo era.

Océane: On The Road Again, the last One Direction tour! Ahaha, it's okay, don't worry!

Okay, gotcha. I never got to see them on tour, it's so tragic. What was it like meeting him — was it everything you wanted and more?

Océane: Honestly, OTRA was such a great tour for me! It was amazing meeting him, such a nice guy! It was quick, but still means a lot.

If you had to designate one Harry song as the song of the summer, what would it be and why?

Océane: "Carolina" would definitely be the song of the summer! It's the song that no matter what you do, you're having fun with it. You can easily scream the lyrics or dance, either alone or with friends.

What do you want next for Harry in his career?

Praise: Harry's a pretty diverse artist as it is already. He has done the big three already, which is singing, acting and modeling. He even got to co-chair the Met Gala. Harry's someone who isn't afraid to push boundaries. So I'm excited to see what else he has decided or will decide to do in the future. I'm hoping maybe an album or two, another world tour, and maybe another movie! He's done three Gucci campaigns already, but maybe he might be the face of another brand soon!

Will you stan Harry forever?

Océane: Who knows, we don't know what tomorrow is made of. But we're definitely behind him no matter what he does, and we will always support him!