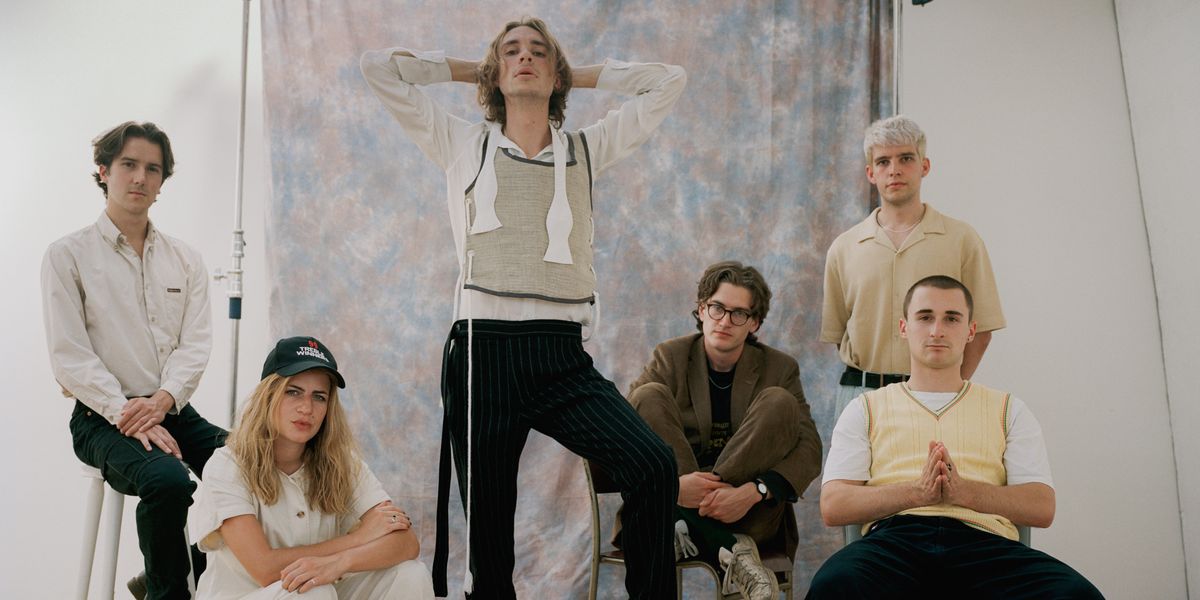 What do you get when you combine a morbid millennial sensibility, euphoric power chords, and a frontman who sings like a shitfaced, deep-voiced British Kermit the Frog with a mouth full of cotton balls?

The answer is Sports Team, the West London six-piece who sounds like no other band right now. The aforementioned frontman is the manically energetic Alex Rice, whose delivery of the band's absurdist yet touching lyrics is a mix of deadpan boredom and thespian-level drama. His energy level is matched by the crunchy musical mess created by guitarist and songwriter Rob Knaggs, guitarist Henry Young, drummer Al Greenwood, bassist Oli Dewdney and keyboardist Ben Mac.

Founded at Cambridge a few years back, Sports Team's knack for hilarity on songs like "Kutcher" has sent them to buzzband status in the UK, where they've got music blogs whispering about "saving rock" etc. Rock's doing just fine, thanks in large to women and queer artists, but it's true that Sports Team's unhinged sense of fun is refreshing and singular. They're neither singer-songwriter bards, nor tender, political post-punks like a lot of great rock acts of the moment. Rather, they sound like a millennial version of The Fratellis or Arctic Monkeys, if they had the freaky DIY spirit of PWR BTTM's short-lived career — plus a flavor of British ennui somewhere between The Smiths and Supergrass. In 2019, the effect is bizarre and utterly wonderful.

PAPER premieres an irreverent Kris Rimmer-directed video for the band's latest single "Fishing," which indeed sounds like a twisted millennial update to Supergrass' 1995 youth anthem "Alright" of Clueless fame. It's a frenetically upbeat song, on which Rice offers a manic, freewheeling send-up of young professionalism and late capitalist anxiety. Despite it's scary-laughing vibes, the song intermittently screeches to a halt for a glorious slacker anthem of a chorus: "We go out with our friends/ And we sit by the Thames/ Going fishing!" Rice exclaims. Compare that to Supergrass' "We wake up, we go out/ smoke a fag, put it out/ See our friends, see the sights/ And feel alright." In the video, Rice shows off some bezerk dance moves, and everyone rocks out on a studio set.

Rice, in typical fashion, says this of the video: "Don't think we've ever actually been fishing but I imagine the high budget studio video captures all the spirit of a day at the quay."

Watch below and keep an eye out for Sports Team on their upcoming tour, which includes a set of US dates.