Snoh Aalegra Is Right at Home

When Snoh Aalegra first saw Whitney Houston in The Bodyguard, and heard "I Have Nothing" at age seven, her fate was decided. Aalegra knew she was destined to be a singer-songwriter.

Growing up in Sweden and raised by Iranian parents, Aalegra's love of The Bodyguard also began a formative English language education. "Along with subtitled episodes of The Fresh Prince of Bel Air," Aalegra adds.

"I have both Swedish and Iranian cultures ingrained in me, so that's always there," Aalegra says. "Plus my love of the U.S. began early on. But growing up in Sweden as one of the few people of color around was not easy by any means."

Aalegra says the small city she was raised in, Enköping, which has a population of about 30,000, had some immigrants but was majority white. She says experiencing discrimination, including being called racial slurs, for her skin color created a desire to be someone else.

"I was the only person in my class that was non-Swedish, so right there I was a target because I'm brown and I look different," Aalegra says. "I didn't like the way I looked, and there was a point I wanted to look like the other girls. I didn't have anybody to look up to in that way, and I think, music was something that I escaped to. There were a lot of things going on at school, I was bullied most of the time, and at home, I felt like with music, I found an identity through it."

Fast forward some time later, and now, Aalegra has created not only a successful music career, but was lucky enough to find a mentor in Prince (yes, the Prince) before he died in 2016. 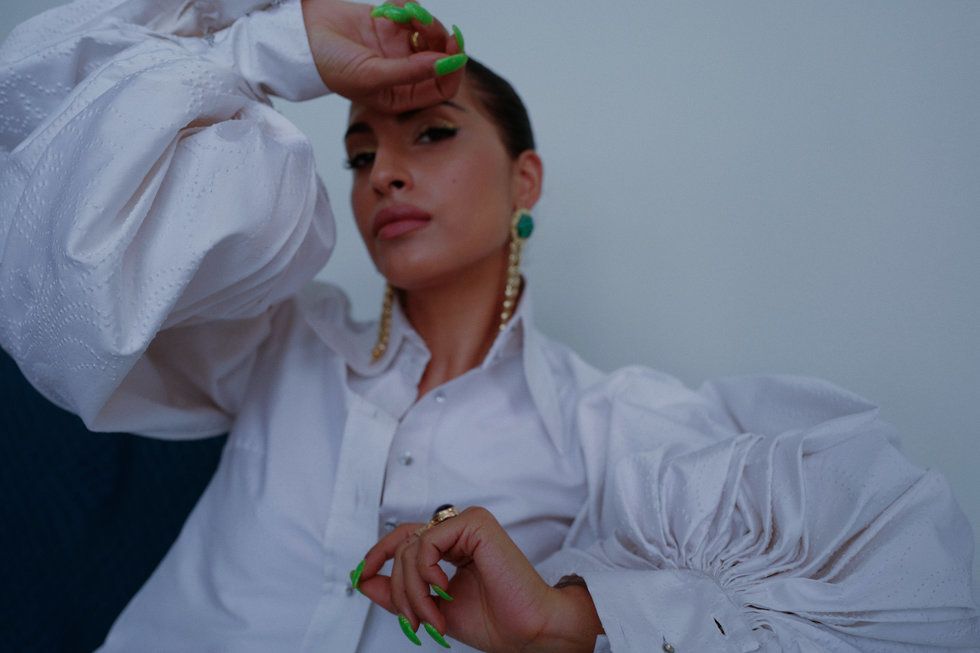 Now based in Los Angeles, Aalegra is releasing her third album, called -Ugh, those feels again, a collection of updated R&B songs that wears its heart on its sleeve in the most relatable fashion. It will likely represent a broader introduction of the singer to American audiences. Her first two albums, 2010's First Sign and 2017's Feels explored the love rollercoaster she was on during two separate long-term relationships.

-Ugh, those feels again captures the shimmering newness associated with falling in love again. "Whoa," set to a crisp, snappy rhythm, finds Aalegra falling faster than expected for a lover, strung out to the point of wordlessness — the chorus is composed mostly of "la la la's," and you can imagine Aalegra smiling as she sings. "Situationship" is about the confusing "are we or aren't we" midpoint. "I don't mean to go on and confuse you/ I know I'm confusing now," she confesses. Then she ups her game, going in for the kill: "And I don't mean to/ Go on and seduce you/ I can't help but seduce you now." Those songs are part of what Aalegra has described as Side A of the album.

Then, there's the stunning "You," on Side B, the song that first got my attention fixed on Aalegra. Side B is more aligned with Feels, grounded in the crash-landing realities of love after falling. "You" is a meditative soul ballad of the highest order, with lyrics outlining the doubt she faces from friends and concerned loved ones, who have seen Aalegra bruised before. "The people I have told say we can't love," she sings. But she honors her true feelings: "I've said too much to take it back," and "But I only see us/ Yeah I only see you." The lyrics are given heartbreaking poignancy by Aalegra's passionate vocals. She's really in it this time. It is all framed by sparse percussion, bass, and guitar solos that I imagine would make Prince proud.

Ahead of the album's release, PAPER caught up with Aalegra to talk about her special connection to Prince, spirituality, overcoming racist bullies, and staying grounded.

What was growing up in Sweden like? You said you were one of very few brown people in your community.

It was tough at times, I was bullied a lot. In Sweden we have two words that would represent the n-word here. One of them, "svartskalle," means "black head," so basically anyone that's an immigrant, is darker skinned with black hair, they can be called "svartskalle," but it's a racist word. And then we have the word "blatte," which is more similar to the n-word [used colloquially among Black people] because we can say it to each other, but a white person can't. "Svartskalle" is something we can't even say to each other. There were altercations in school where I would get in arguments with some girls and they would be like, "Hey you fucking blatte, go back to where you came from," and to me that was so confusing because I'm from here, what are you talking about? In my mind, I wasn't so different because I was born in Sweden, but I looked different. My parents are not your parents, I just have a different culture. There's racism everywhere in the world; it's not just Sweden, it's everywhere, but other than that I had a pretty okay upbringing. Sweden is a beautiful country, it was just as a kid you're already trying to figure yourself out so that kind of bullying is hard.

When you found music, did that shield you from bullies or did it make things worse?

That was yet another thing that I would get bullied for, because I was actually determined and I had no fear when it came to music, I was kind of vocal about it, too, telling people I want to be a singer when I grow up and the people that bullied me would be like "No, you're not going to be anything," but that was something, thankfully, I was always secure about: singing. 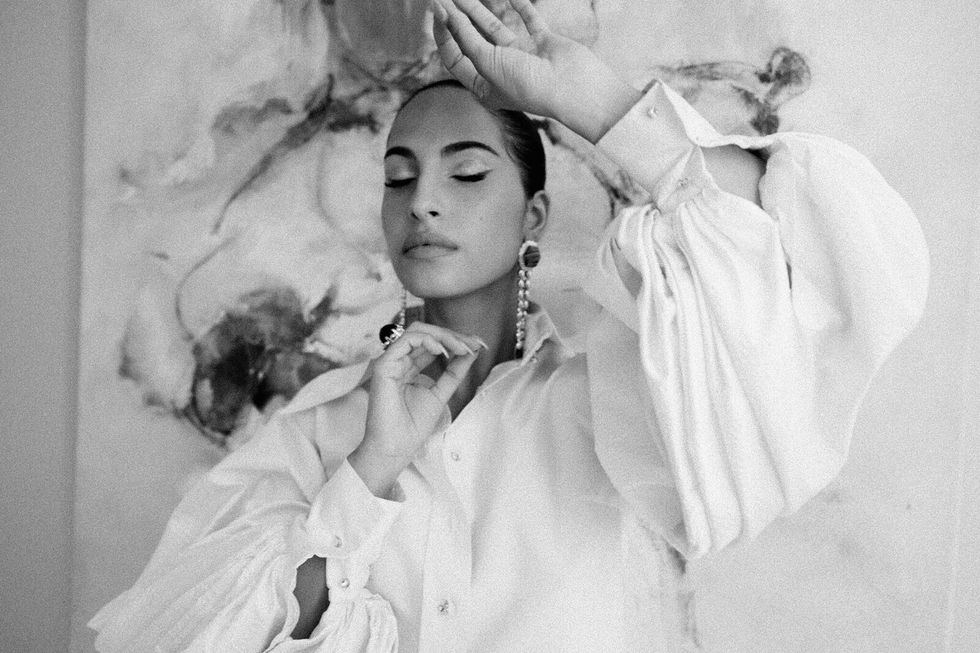 Tell me more about your relationship with Prince. It's clear he's a huge inspiration for you, especially on songs like "You."

I was fortunate to be able to meet him about three years before he passed away [in 2013]. He discovered my music and reached out, and I got to be around him a lot, and he flew me into Minneapolis [where he was at Paisley Park]. He also came to LA and we would have a piano at his hotel room and we would just jam up there. I would also go to some of his shows and just him watch very closely from a side stage. He would sing without in-ears, and that's something I'm working toward for improving as a performer.

How did he find your music?

I tried to ask him how he discovered my music, but he was so secretive and he didn't want to tell me. I'm pretty sure he found it online, because he just always was on the music blogs. He always knew about new artists, and that was impressive. He would put me onto other new artists. He would rehearse with his band 2-3 hours a day and I was just in awe at how he'd still practice. He always believed that you could be better, and he was Prince. What I took from that was if he's still committed then we all need to step it up. He would send me music at least 2-3 times a week of things he thinks I should study.

"Being in the world of R&B creates a sense of home."

Any funny memories with him?

He would prank everybody all the time, and prank call me, and if he was alive right now God bless his soul, he would find out what hotel I'm in and he would prank call me, acting like a delivery person. I'd be like, I didn't order pizza! Who the fuck is this? And you couldn't curse around him. As soon as I would say, "Who the fuck is this?" he'd just say, "Hold on, it's Prince stop talking like that," and the joke was over. But I loved that about him, how he was so playful and youthful and I think that was kind of magical.

What was it about Whitney Houston that you connected with most?

It was just her tone and her technique and I think it all goes together. Certain notes give people goosebumps. But it's not always about runs, sometimes it's the feeling. R&B just captured my heart. I was always into these artists, and another really important one to me was Brandy. She's the vocal bible. The Never Say Never album taught me how to really sing. So the other artists I mentioned before made me want to become a singer, but then Brandy was almost like a friend to me as a little girl, listening to her on repeat and singing to her album. She really taught me how to sing at that time, but obviously I sing better now, I'm just saying I tried. Now I can hit some of the notes, but it was her and then Lauryn Hill, all of these strong dope women.

What about being in America has helped you connect more with R&B?

Soul and R&B has its roots here in America, and I just wanted to work with the real deal, and I've been learning so much and becoming a way better vocalist and it's just such a blessing. All of the musicians here are so incredibly talented and so spiritual, and it's okay to be spiritual here. I love gospel music, too. I'm such a spiritual person and in Sweden it's a bit taboo to be too open with your spirituality; they always think it's a bit weird. The majority in Sweden are atheists and Christianity is the biggest religion, but I feel like most people that I know are atheists in Sweden, and I just felt more of a connection with people here. No ID is my executive producer, I'm signed to him and it's just family here for me, too. He's married to my cousin, who is my manager. I think being in the world of R&B creates a sense of home, and I think it's important to have that sense of home and spirituality within your music. I love that I feel more "at home" now than ever.