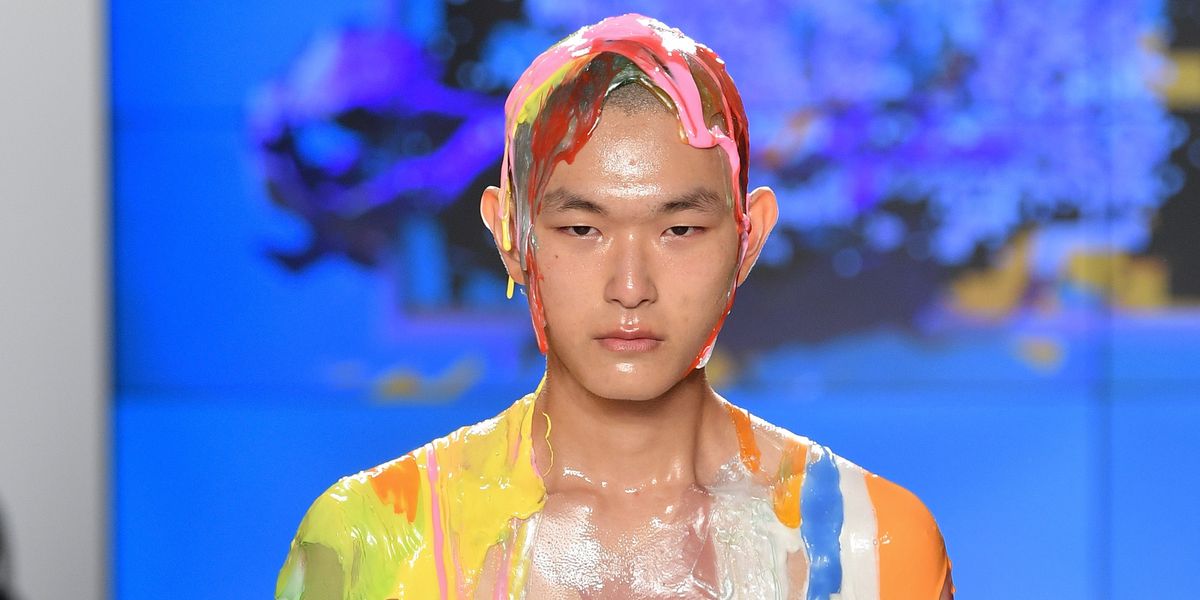 A Complete History of Slime, On Instagram and IRL

At his spring 2019 show, Landlord creative director Ryohei Kawanishi sent models out with kaleidoscopic slime pouring down their faces. In a true Nickelodeon moment, one shirtless catwalker was covered in the stuff, with white, green, pink, yellow, blue, and red goo slathered all over his arms and torso. The collection, directly inspired by Windows 95, referenced the very '90s hobby of "surfing the net." And if there's one thing the Internet still loves, it's slime.

In 2016, a group of Thai teenagers started the slime video sensation, and over the past few years the clips have become a pillar of Instagram and YouTube. Multiple slime accounts have millions of followers, establishing the genre as a basic well of content that never runs dry. And some slimers have become so influential that they're truly rolling in it — California YouTuber Karina Garcia says she makes six figures a month through her slime channel.

Slime is both easy to make — mix Elmer's glue, borax, water, and whatever dyes or sequins you want — and endlessly fascinating, a parade of sensory delights. The videos are so popular that there was an actual Elmer's shortage in the United States last year. And it's no wonder they're so beloved: the sight of someone mixing multi-colored slime is as soothing as a yoga class, a deep-tissue massage for the eyes. The sounds of slime are equally palliative; I like the videos that feature the crunch of styrofoam, my preferred form of ASMR.

restocked! on Instagram: “posting w/o a watermark now but hopefully they won't get stolen 🤷🏻‍♀️ ♥ use my code Mercari code! "HFWTDJ" to get $2 worth in credits ♥︎…”

In a 2017 article for Select All, writer Kelsey McKinney attempted to get to the bottom of the slime craze, speaking to multiple teenagers who found the videos therapeutic. "Watching someone else ply and poke and squish slime together is calming," she concluded. "It's easy, as the repetition washes over you, to lose track of yourself and your worries; the video becomes a momentary escape from quickly moving, anxiety-inducing social-media feeds."

ＱＵＥＥＮＳ♔ on Instagram: “hi sorry it’s been a while! summers almost here and then we’ll be posting a lot more often :)”

Even though they deal with literal gunk, today's slime videos are strangely manicured; perfectly lit, perfectly edited. They bear little resemblance to Nickelodeon slime, a disgusting staple of a '90s childhood. Nickelodeon slime, still used at the Kids' Choice Awards, is viscous and bright green, and though there seems to be widespread affection for the stuff, just the sight of it makes me gag. It's made out of ingredients like jello powder and chilled applesauce and Cream of Wheat, the world's most disgusting member of the porridge family. Imagine how much being slimed has contributed to the ceaseless trauma of child actors.

The slime at Landlord intentionally dribbled in a way that felt more Kids' Choice Awards than the goop that kids are actually choosing (as did the slime in PAPER cover star Christina Aguilera's "Accelerate" video). And while this may be the first runway show to feature models covered in actual slime, the trend has been steadily sliding into fashion. Adam Selman's fall 2018 show included t-shirts and slips printed with a graphic of a manicured hand squeezing bright green slime, and Jeremy Scott spring 2017 included slime patterns. Both Garage and French Vogue have created their own high-end slime videos. It's also omnipresent in beauty — snail mucin is widely used in popular Korean beauty products, and painfully hip nail artist and Sally Hansen global color ambassador Madeline Poole released a polish in March called "Slime Scene."

In an interview for an excellent, comprehensive piece about the slime trend by Alexander Iadarola for Garage, Poole said she thinks "the childhood obsession with slime is really deep." She continued, "There's a curiosity about bodily substances, especially things that are deemed taboo and gross. I feel like that's why Gak and Silly Putty were invented: so kids could have something that mimicked the off-limits."

One of Iadarola's subjects, the popular slimer Prim Pattanaporn (@sparklygoo), said that the slime trend is winding down a bit on Instagram. And perhaps it has hit its peak — but it's not going anywhere. "Squishing around fluffy pastel sludge induces a sort of release in the viewer; its status as an alien substance allows it to become an image of another way to move through the world," wrote Iadarola. "You can't hurt slime, and you can handle it with motions that might injure a sensitive being in any other circumstance."

Squish the pain away, I guess.