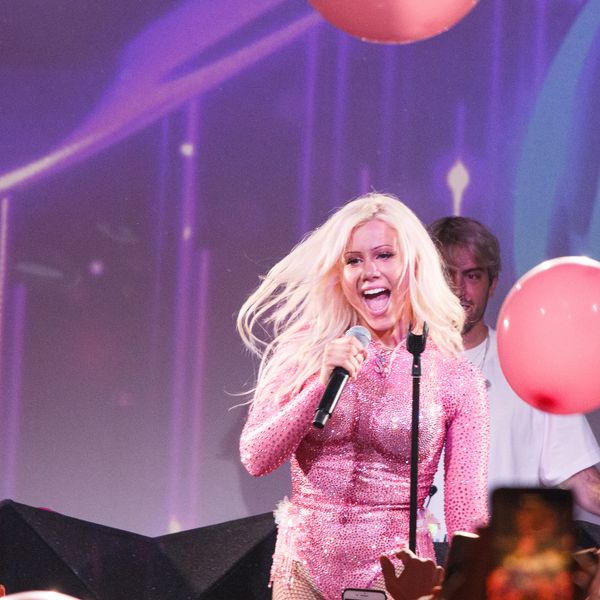 Slayyyter Live: A Star in the Making

It was interesting to watch teen fans and ravers of all ages descend this Monday upon the main stage of Brooklyn's Elsewhere Nightclub. Together, the 16+ crowd eagerly awaiting the arrival of rising internet-bred pop princess, Slayyyter. Having just danced through opening sets by her peers and collaborators, Umru and Robokid, all were here to pledge allegiance to their new Supreme.

For not even a year, Slayyyter has enthralled fans with her savvy blend of pop culture nostalgia, online humor, sexy image, and sexually provocative lyrics. Not to mention, she has the uncanny ability to channel an avatar of any major, blonde pop icon from 2000 to now.

There was plenty riding on this show for Slayyyter, who performed her first-ever headlining live set to kick off her debut U.S. "Mini Tour," stopping at 11 major cities. This engagement was the first of two in the space — the other happened last night. Both shows sold out within a couple days, which is an impressive feat for the independent artist hailing from St. Louis.

Only months ago, she was working as a receptionist at a hair salon and uploading her glitchy, catchy, self-recorded singles to SoundCloud. As she told PAPER last October, "I live with my mom, and yes, I work 9-5," Slayyyter said at the time. "I literally fold towels. It's kind of tragic to be honest. Then, as soon as I get home from work, I just go to my closet, which has a cute recording studio setup, and I spend the rest of my day doing [that] until I go to bed."

That work ethic enabled Slayyyter to build a steady roster of collaborators, including Ayesha Erotica, Robokid, Boy Sim, and others. Visits to Los Angeles further expanded her circle of musician friends and artist co-signs, including from names like Dorian Electra and Azealia Banks. (Speaking of Banks, the two are reportedly collaborating on new music). As part of a recent distribution deal with Atlantic Records subsidiary, Big Beat Records, Slayyyter re-released her bubbly Valentine's Day single "Mine," and "Daddy AF" with an expensive-looking video.

So when Slayyyter finally hit the stage shortly after 10:30 PM, one couldn't help but wonder if all the hype and cred she's been building would translate onstage. She stepped out with long, blonde tresses styled with an iconic Farrah Fawcett flip in the front, wearing a pink metallic, sequined bodysuit, not unlike something possibly worn by her idol and closest inspiration, Britney Spears. Up until that reveal, many fans, who had only seen Slayyyter online, didn't really know what she looked like.

Unlike Britney, who opts for a headset for her lip-sync, Slayyyter rocked a handheld mic, delivering a mix of pre-recorded and live vocals. She gleefully sauntered about the stage, performing all 10 of her singles released from last year to now. She signed every autograph, collected numerous gifts, and took fans' phones for selfies. Slayyyter also sang a mix of new, as-yet-unreleased singles from her upcoming album, which she referred to as S1 onstage. One track covered vain celebrity with a deep-fried Britney vocal so spot-on it was chilling. Another half-rapped, half-sung track with a "cha-ching" refrain recalled Gwen Stefani at her most delightfully weird, mid-2000s peak. (Stefani is another of Slayyyter's key inspirations).

Trippy visuals reminiscent of Slayyyter's single artwork by Glitchmood, lit up the screen behind her and Robokid, who was cueing up the instrumentals. There were light shows, jumping, and an encore of "Mine" with pink balloons that descended upon the crowd only to be popped like fireworks.

The whole time, the subwoofers rattled hard enough to make bones quiver, which would've felt great if I were high. Slayyyter visibly struggled with her mic pack — cords caught in her hair — which is forgivable a hallmark of any rising pop star's career. It just makes the art of artifice dissolve into something far more real. Sometimes you could barely hear Slayyyter, save the occasional moment of performative vocal prowess, hand to ear, finger in air, and all. Practice makes better, if not close to perfect.

Yet, somehow, everything Slayyyter did, given her image and sensibilities, felt completely intentional. Obviously, she's been studying the masters of divadom for years, and gave us her own synthesized version. Nevertheless, Slayyyter kept the energy high with a well-timed dip (lots of those) or hair flip here or there (even more of those), and numerous expressions of gratitude for all who came to see her. She seemed genuinely surprised. It's always cool to witness an artist realizing her impact in real time.

But the more visible Slayyyter is and the more her fanbase grows, perhaps the less surprised she'll be. She's already well on her way.

☆ slayyyter ☆ on Instagram: “last night :) thank u so much new york!! cant believe any of this. thank you to @umru and @robokid.online too, and to @maxschramp for the…”