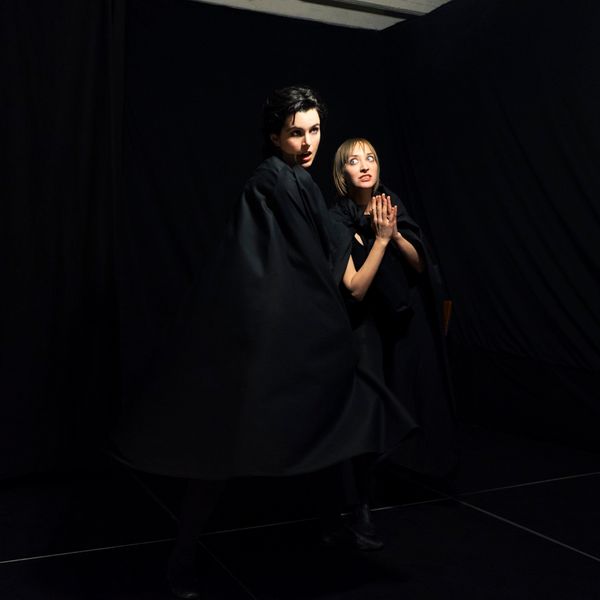 One recent blizzardy New York night I trudged through snow to a 5th floor walk up space called MX Gallery on Canal Street to see Slash, a two woman play I was told was inspired by fan fiction about legendary straight male duos enacting homoerotic fantasies. Hello! What's not to love?

The show is written, adapted, directed, and performed by Leah Hennessey and Emily Allan, the duo behind the cult web series Zhe Zhe. "Scavenged from the fandoms of Star Trek, Sherlock, The Beatles, and beyond, Slash guides the audience through an infernal fantasia of perverted intertextuality," the pair describes.

In Slash, Allan and Hennessey run on and off stage in black leotards, frantically changing wigs and adding props to their looks. It felt like a delightfully demented tennis match with both women skillfully lobbing characterizations at one other only to have the ball sent back with equal skill. This is classic downtown theater at its best: a slightly seedy space, home-made props and costumes, and tons of talent making it all come together.

PAPER talked to Hennessey and Allan to hear more about this outrageously entertaining, sophisticatedly twisted show.

How did you choose to do a show using fan fiction?

Leah Hennessey: I was always intrigued by fan fiction, ever since my friends in middle school showed me the Sailor Moon fan fictions they were posting. I wasn't deeply into anime but I immediately felt the power, the ominous magnitude, of the world into which they were descending. At the time I think I was too scared to get that sucked into the Internet, but fan fiction retained that dark glamour.

Emily Allan: We both have long histories of shameful fan fiction voyeurism, but I think we didn't get obsessed until we got into the (BBC) Sherlock fandom.

LH: We were both completely monomaniacal about Sherlock, and specifically, the relationship between Sherlock and John Watson. This play started as a series of modular sketches, and the first one we did was two characters roleplaying as Sherlock and John singing "I Don't Know How to Love Him" from Jesus Christ Superstar.

EA: I don't know how that got cut from the show.

Do you two have favorite fan fiction writers and or subjects?

LH: I love Johnlock (Sherlock and John) fics, especially when they take place in alternate universes, like Hogwarts or in a Shakespeare play.

EA: The best feeling is when you find the fan fiction about characters you didn't know anyone else shipped, like Trotsky and Stalin, or Frog and Toad.

LH: Or Rick and Vyvyan from The Young Ones. I also love fan fiction masquerading or, I guess, passing as literature, like Gregory Maguire's Wicked.

EH: Lots of books start as fan fiction, but to publish you have to change the names and pretend it's "original content."

LH: 50 Shades of Grey started as a Twilight fanfic on the Internet.

EA: My Brilliant Friend started as a Buffy fan fiction.

"This play started as a series of modular sketches, and the first one we did was two characters roleplaying as Sherlock Holmes and John Watson singing 'I Don't Know How to Love Him' from Jesus Christ Superstar."

Do you think the fan fiction fans will love Slash or be offended?

LH: The world of slash fiction is historically fraught with intense factionalism-

EA: If you look at the K/S (Kirk/Spock) Wikipedia there are so many factions and subfactions, it's worse than Trotskyites. Some writers are traditional romance writers while others are straight up pornographers. There are women who have archived the slash fanzines from the '70s online, and others who believe in the sanctity of printed matter. Some slash writers consider slash to be a gay thing, while others vehemently insist that the same sex pairings express a different sexuality entirely.

LH: And I'm sure some hardcore fan fiction writers will think that we're poseurs or that we're breaking some kinds of taboos by taking these scenes out of the convention or the bedroom and putting them on the stage. But I also think that people who love the stuff we love will be especially titillated by what we're doing.

Are there particular segments the audience always goes crazy for?

LH: I think Tiffany and Ivanka are the most on-the-nose topical, and also the most obviously outrageous, so they definitely get a big response. Also Emily's Camille Paglia is a showstopper.

How did Camille Paglia/Susan Sontag work their way in?

EA: I couldn't stop watching this video of Camille Paglia and Susan Sontag talking shit about each other. I don't know what it is about Camille, it's not about agreeing with her or disagreeing with her, when I watch her speak I salivate. With love, with rage. I just had this compulsion to be her, to wear her...

LH: I think we started that scene when we were asked to be part of a performance at MoMA and we thought it was funny to lampoon something academic in that context. And then as we got deeper into the world of homoerotic fan fiction, it became important for us to see Sontag and Paglia's competition as a kind of slash.

EA: It's so extreme and charged and exciting.

LH: Emily and I have both always fetishized the intense relationships of male collaborators (like Paul McCartney and John Lennon, archetypally) and comedy duos (Peter Cook and Dudley Moore). To me, that was romance, and embarrassing as this is to say, I secretly felt that as a woman, it was something I could never have.

EA: We kind of willed ourselves into this dynamic, even though we felt like imposters.

LH: Because we're not British men.

EA: And what we discovered is that the root of that combustible sexual tension and hilarity is a lot of trust and a lot of competition.

LH: Until we were doing this play, I don't think we ever allowed ourselves to be overtly competitive, we didn't want to have that kind of friendship. But in this new relationship we've magicked ourselves into, there's a really thrilling, I think healthy, rivalry. Like if Emily's getting more laughs than me, I don't feel bad, I just want to win.

EA: Whereas, offstage, like at the diner, if someone's getting more laughs than me, I just want to die.

LH: Yeah I want to disappear.

Do you ever fight over who gets to play whom in each duo?

LH: And then I somehow convinced Emily that she looks more like Peter O'Toole.

EA: Even though I do a really good Richard Burton impersonation.

LH: And I'm in love with Peter O'Toole. I think usually we don't want to play the character we're more attracted to, but usually the casting's pretty obvious.

EH: Because it's just based on hair color

How long is the show running?

LH: Right now it's through January 31st, every Thursday and Sunday (with no show January 17th), with more shows TBA.