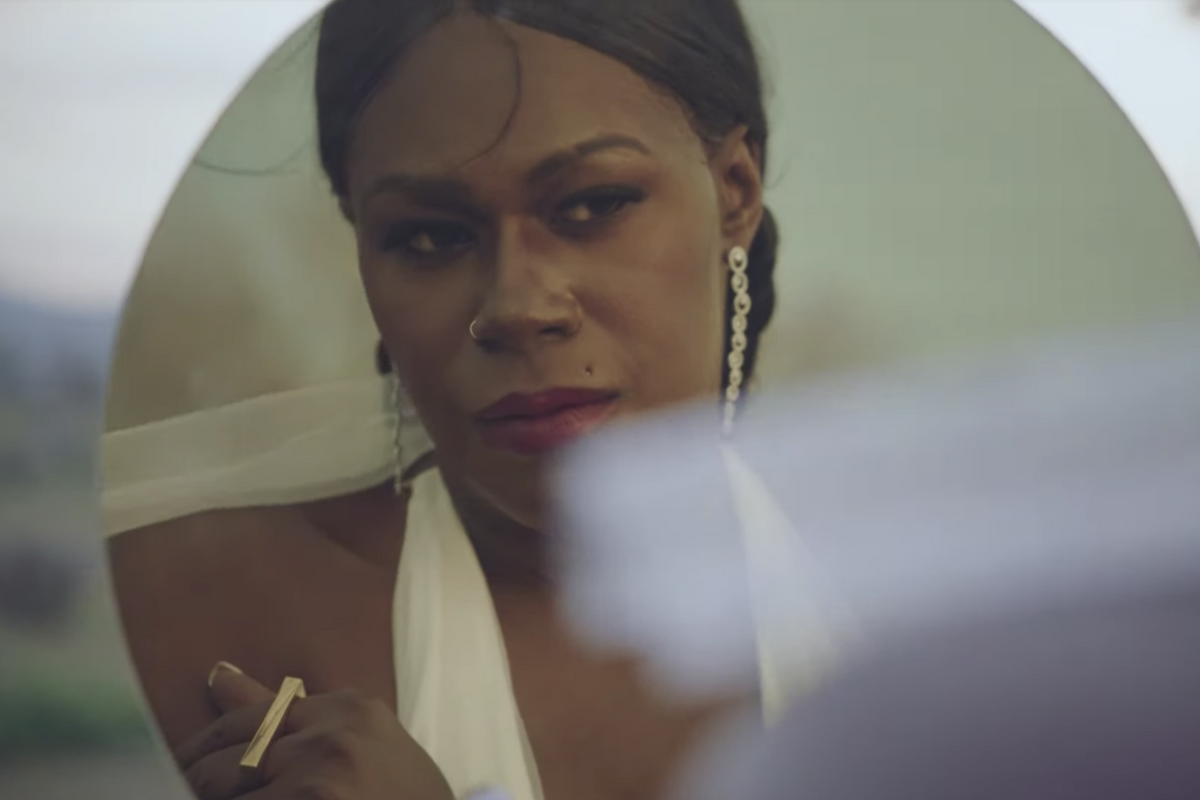 Shea Diamond's new single, "Don't Shoot," comes with a very essential message that is more layered than a couple listens might reveal.

The song, which Diamond composed and produced with a rousing, soulful arrangement alongside frequent collaborator Justin Tranter, arrives just in time for the fifth annual National Gun Violence Awareness Day. When Diamond sings, "Hands up, please don't shoot," in the song's emotional chorus, it carries with it notes of personal experience, righteous resistance, and calls to action. The song serves as a message against America's ongoing gun violence epidemic while also being a reflection Diamond's experience as a Black trans woman who has been incarcerated and systemically discriminated against. It's also a rallying cry for supporters of the Black Lives Matter movement against police brutality, and definitely for queer and trans people of color who face other forms of violence every day, from harassment to outright murder.

Given the song's complex intersectional messaging, it makes sense then that the video, premiering today on PAPER, boasts a visual treatment just as powerful. In the Western-style video, directed by Devyn Galindo, Diamond wears a gown and narrates her life story amid dusky, nostalgic landscapes, while small Black children are shown atop a horse, and in a wide-open field wearing oversized du-rags. It's an allegory for what Black children grow up to become. How the world, riddled with prejudice and violence is inclined to see them. The video offers a more peaceful, inclusive alternative.

Watch Shea Diamond's "Don't Shoot," below. Diamond opens up about the nuances of violence both against and within Black, queer, and trans communities, and shares her thoughts on what it might take to eradicate America's tragic love affair with guns.

With this video, I feel like you're speaking on two subjects related to violence within our communities: it speaks to unarmed Black people who are killed by cops, and the epidemic of murdered Black trans women. Is that right?

You are right about the experience of different intersections within our culture. It's about the Blacks who are killed when they come to the presence of law enforcement for walking Black, talking Black, driving Black, being Black. Trans people, I can't even go there. And not only are we being killed, but I don't feel I can speak for all trans women because I have a unique opportunity to tell it from my perspective, but each individual trans woman is different. The range of trans experience is so broad that I wanted to tell my life story. I was never told that I was doing anything right, it was always like: You're doing it like a girl. You're talking like a girl. That would demonize my whole experience, so in that, the only thing my mother ever taught me was that I wasn't enough, I wasn't enough of a man, or enough of this, or enough of that. I'm also talking about my experience being incarcerated, and how it is the new modern slavery, and how as a Black trans woman, I was able to exist in there because we demonize the outside while we're free. I think the song captures many intersections of my experience, without even saying all of that.

You distilled so many big ideas into a four-minute song. What was a turning point for you while writing it with Justin?

On this particular day, I think I was very affected by the murders of our Black trans sisters. I couldn't go on Facebook, I couldn't go on any social media without seeing somebody who looks like me being killed. So, I couldn't have anything else on my mind. I couldn't talk about romance. I can't talk about, "Oh, I need to have money, money, money." I can't do that because there are so many other things that are more important: it's my whole community that suffering. As an artist with a platform, I have to use it correctly, and that means spreading awareness. So I'm amplifying the voices of those who don't always get to be heard.

"Children are our future, but what about when us trans and queer people were the future? Did we not matter then?"

I love that you used children to tell the story. Can you tell me more about that decision while making the video?

Oh my god, my little ones. We talk so much about children being our future. Children are our future, but what about when us trans and queer people were the future? Did we not matter then? The thing is that with our queer lives, nobody gets to know. They, meaning the world, only knows our experiences, but not fully. They only know how we love, who we love, and how we identify. Beyond that, it's not interesting. So they were not interested in the fact that we were once children. That we say we love children, we protect children. So at some point, they stopped protecting us because we didn't fit into this mold. So I wanted to show children as bearers of light, a reflection of how we experience life. People pay attention to messaging involving kids, but they don't care what happens to others. Even young trans people. For me, as soon as you could tell that I was queer, when I was young, you could tell I have a little "sugar in my tank," as I used to hear growing up. As soon as they've seen that first twitch, I've never stopped fighting. And I'm not talking about violence, which comes in many forms, to be clear. The violence surrounding us somehow becomes bigger than our individual problems. And I'm here to say that we are bigger than a world that tries to divide us.

What else do the words "don't shoot" mean to you?

It's also about the relentless anxiety trans and queer people face. Because of violence and society trying to disenfranchise and kills us, it often feels like nobody gives us a chance to really enjoy life. We're dealing with anxiety we've had since childhood because of bullying or being rejected. We can't live our best lives, go to the mall, and laugh. We can't take our boyfriends and girlfriends out and have this normal experience, whatever that means. It's constant pressure we face when trying to be ourselves, and sadly, sometimes, it's like, once you get too comfortable, it some type of mess that comes. It's some type of misgendering that happens, or a verbal or physical assault we face. So, what happens when we continuously put this message out: "Don't shoot." Don't attack me. Don't shoot off at the mouth and call me out my name. It's just so important. "Don't shoot" means we want peace, like anybody else. And it's powerful.

I relate. I am a Black, nonbinary, femme-presenting person and I am often attacked. Just this week even.

If it was somebody in your own community, wasn't?

"Sadly, our Black trans sisters being killed are often being killed by other Black or Brown men. So the violence we inflict upon each other within our community is much deeper. It feels like betrayal."

Yes, it was, unfortunately.

We don't talk about enough that as a society, as a culture. Black on Black violence is just about gang violence. Sadly, our Black trans sisters being killed are often being killed by other Black or Brown men. So the violence we inflict upon each other within our community is much deeper. It feels like betrayal. Somebody told me, we don't have a community, we are trying to build a community. We don't really have community, do? Even within queer circles. How many people were around you who could've said something. Even one word helps. But when no one speaks up, people who want to harm us feel more powerful. It becomes more popular and acceptable to attack us. Even if you take a stance in those situations to not physically fight back, or even have a mental debate or a conversation that challenges toxic masculinity, it can work against you.

People see you as weak when you're not fighting, and that needs to change. In our community, a white person can come through of the same experience, whether they're trans, queer, whatever, and you rarely here about people of color or Black people coming for them. Why is that? The system says, Don't touch no white bodies in these streets. And especially, don't touch no white women in these streets. It's just the truth that we live in. We're not too long out of slavery and out of segregation, but some Black people feel that when they have power they can disempower people the same color as them... whether that be through violence or what-have-you. Nevermind the fact that we've still got white supremacy alive in these streets.

What do you think it will take to transform the culture of violence America exists in?

In terms of music, we need more artists pushing the kinds of messages I'm pushing. Or what Childish Gambino said in "This Is America." Our signature in music tends to be this mindset of "I'm better than you. I can get what you got." We highly publicize gang violence. We celebrate these things because we know it's not happening in our white community. So now, those of us Black people bold enough have to deliver the message that it's not okay to hate each other. It's like a way of reinforcing slave mentality, like saying "Black isn't enough." Colorism does exist on every single level, too. As far as guns go: The killing doesn't stop when you take the guns away from certain people. Now the law says if you have a felony, you can't have a gun. But who is that felony targeted at? Black people. It's not about taking white men's guns, who are committing mass murder regularly, it's about taking Black people's guns. Preventing them from being able to protect themselves from cops. Hear me. That's what it comes down to. Racists don't want precautions.

"As a trans woman, before I have any type of surgery done, I get a whole mental evaluation for years before they even give me a hormone. They want to know if I'm sure and why I'm doing what I'm doing. Why don't we apply that same logic to gun owners?"

That's what I have with "Don't Shoot." I want people to... because you know what is happening. People know what is being done to trans people, queer people, to people of color. Now, what are you gonna do to stop it?