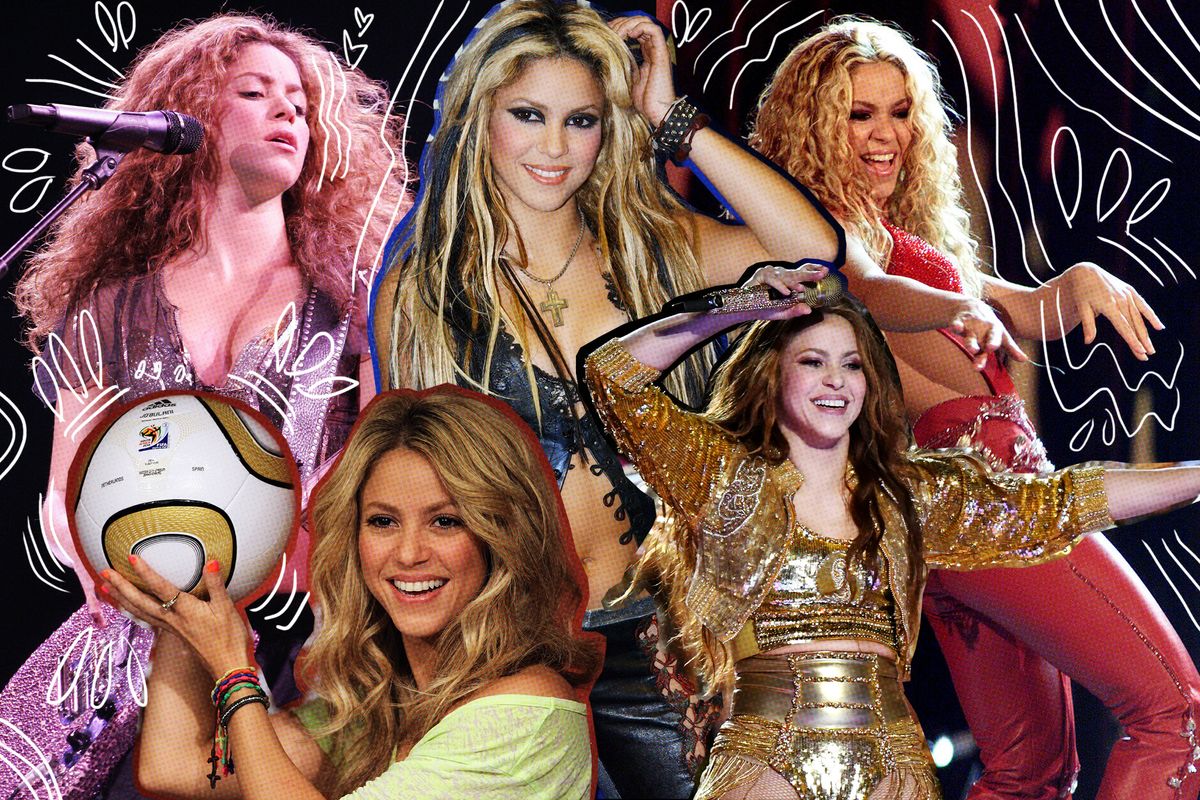 It was 25 years ago today that a raven-haired rockera from Barranquilla, Colombia made her mark. After two failed albums, she was given a third and final chance with a little LP called Pies Descalzos, or "Bare Feet." With full creative control, 18-year-old Shakira bared her soul, and the world was introduced to her strikingly poetic lyricism. As she's evolved with her music throughout the years, that free-spirited Shakira essence remains the same. She helped set the stage for Latin music's global crossover, most recently at the Super Bowl halftime show, with both feet planted firmly on the ground.

That girl with the electric guitar got herself some red highlights and expanded her repertoire with her second major label album, 1998's ¿Dónde Están Los Ladrones?, blending Latin rock with elements of pop and Middle Eastern influences that reflected her Lebanese heritage. At the same time, she was discovering how to use her whole body as an instrument to the music, belly-dancing on "Ojos Así." Pies laid the groundwork for Shakira's takeover of Latin music while Ladrones established her as a bonafide superstar in that scene.

Having reached the ceiling of Latin music, Shakira wanted more, so she looked to the US with her English-language crossover album, 2001's Laundry Service. Now a blonde bombshell, she was seen as a sellout by some original fans while breaking through that new market with the smash hit "Whenever, Wherever" and the Spanish version "Suerte." Yes, Shakira had to record in English to find her footing as a global pop star, but with 2005's Fijación Oral, Vol. 1, she later charmed that wider audience over to the other side.

There's no limits to her success in any market or language. When you think you have her figured out, she always switches it up. Shakira is still that rockera. She's still that pop star. She can do it all, as exemplified by her recent Zootopia cut "Try Everything." The self-proclaimed "She Wolf" is a titan in the digital era of music where she devours billions of streams with her catalog. In her wake, Colombia has become a hotspot for talent with recent exports like J Balvin, Maluma and Karol G.

As Latin music continues to become a global force, we can't forget to remember Shakira's impact in the movement. With 25 years of LatinXcellence, we're breaking down Shakira, Shakira's best career moments with 10 of her biggest hits.

After not achieving much success with her albums Magia and Peligro, the title of the lead single for Shakira's Pies Descalzos album was pretty emblematic. "Estoy Aquí," or "I'm Here," sounded like a declaration of an artist who finally found herself in the music. The reassuring tune remains a tender moment in her catalog. From the get go, Shakira pushed the envelope with Pies Descalzos, especially on "Se Quiere, Se Mata." She sang about the dangers women face with unsafe abortions when there's no legal option. It's an issue that activists in Latin American countries are fighting for right now. 25 years later, Shakira is still here and shaking things up.

After a book of Shakira's lyrics for her Pies Descalzos follow-up was stolen, she spun the bad situation into gold with the album ¿Dónde Están Los Ladrones?, or "Where Are The Thieves?" She teamed up with Colombian hit-maker Estéfano to pen the lead single "Ciega, Sordomuda." The song about being blinded by love kept Latin music fresh with its unique blend of mariachi and dance-pop music. "Ciega" would define the sound of Latin music going into the new millennium as other artists started lining up to collaborate with Estéfano next. The rockera was finding her groove and absolutely loving it in the wild music video.

"Ojos Así" is another standout hit from ¿Dónde Están Los Ladrones? Shakira included it on the setlist for her 2000 live album MTV Unplugged. She was the first female artist in Latin music to be invited to record the special that later earned her a Grammy Award for Best Latin Pop Album. "Ojos" features Arabic chanting and elements of Middle Eastern music that reflected her Lebanese side. Singing the hypnotic lyrics in Spanish, she beautifully blended both of her worlds. Shakira also started her signature belly-dancing here. The MTV Unplugged performance put her talents on a world stage for everyone to see.

Following in the footsteps of Puerto Rican superstar Ricky Martin and Spanish singer Enrique Iglesias, Shakira crossed into the English market with "Whenever, Wherever," the lead single from her Laundry Service album. The Latin-influenced song was penned with another woman that laid the groundwork for her, Cuban-American singer Gloria Estefan. The poetry of Shakira's lyrics could be appreciated in English with lines like: "Lucky that my breasts are small and humble, so you don't confuse them with mountains." Shakira scaled the Billboard Hot 100 chart, peaking at no. 6, and the song established her as a global superstar.

With the world captivated by Shakira's English crossover, she uniquely retained that audience when it came time for her Spanish-language album Fijación Oral, Vol. 1. After Puerto Ricans like Daddy Yankee and Tego Caulderón put reggaetón music on the map, she dabbled in that sound for "La Tortura" with Spanish singer Alejandro Sanz. At a time when it was a rarity for a Spanish song to chart on the all-genre Hot 100 chart, "Tortura" peaked at No. 23. She also became the first Latin artist to perform a song in Spanish at the 2005 MTV Video Music Awards. Fijación Oral reached No. 4 on the Billboard 200 chart and holds the record for the highest-charting fully Spanish album by a female artist. Shakira later became the first woman to win Album of the Year at the 2006 Latin Grammy Awards.

With "Hips Don't Lie," Shakira proved that her success in the English-language market wasn't a fluke. Actually, following the decent sales of her second English album Oral Fixation, Vol. 2, Wyclef Jean was enlisted to revitalize the project and take it to the next level. That he did with Shakira on "Hips Don't Lie." On the song that sampled the early '90s salsa classic "Amores Como El Nuestro," Shakira found the perfect synergy between her body and the music. Her hips not only captivated the U.S., but they also dominated the world over. She earned her first no. 1 on the Hot 100 and the U.K. Singles charts while hitting that same peak in many more countries. Shakira, Shakira solidified her place in pop history.

For her first all-female collaboration, Shakira joined forces with superstar Beyoncé on "Beautiful Liar." Bey sought out Shakira for the lead single to her B'Day album re-release. We never got a joint live performance of this iconic team-up, but fortunately the two stars served enough looks and hip action in the chic music video to last for years to come. Shakira also got Beyoncé in on her belly-dancing gig. That Middle Eastern-inspired dance break was everything and continues to live in my head rent free. The power that that has. A few years later, Shakira would enlist another R&B queen, Rihanna, for her single "Can't Remember to Forget You."

Having already proved herself in the English-language market, Shakira went into her She Wolf album just looking to have some fun. The zany title track missed the Hot 100 top 10 by one spot, peaking at no. 11, but it remains a playful and important moment in her catalog. Backed by disco-influenced beats, Shakira championed for women to let out their inner "She Wolves'' and live their sexually-empowered lives. She ate up the patriarchy as she embraced her sexuality in the surreal music video. Speaking of sexuality, "She Wolf'' became an LGBTQ+ anthem. "There's a she wolf in the closet, let it out so it can breathe," she sang. Shakira said, "Derechos de los gays!" (or "Gay rights!")

After Shakira made an impact at the 2006 FIFA World Cup with the Bamboo remix of "Hips Don't Lie," she had an original song ready for the 2010 games in South Africa. She teamed up with local Afro-fusion band Freshlyground for another one of her biggest anthems, "Waka, Waka (This Time for Africa)." The music video featured the top soccer players at the time, including her boyfriend Gerard Piqué. That was her first time meeting the Spanish star. "Waka Waka" was a highlight of Shakira's Super Bowl halftime performance where she highlighted the Afro-Colombian community with the traditional champeta dance break.

Shakira's global breakthrough helped put Colombia on the map in the Latin music scene. J Balvin, Karol G and Maluma are among the new generation of stars to emerge from the country. She teamed up with Maluma for the ultra sexy "Chantaje" for her album El Dorado. Shakira had the self-proclaimed "Pretty Boy, Dirty Boy" on the hook with her timeless hips. The globe was also spellbound with "Chantaje" peaking at an impressive No. 51 on the Hot 100 chart. Maluma recently spoke about the collaboration in SPIN, saying, "Working with [Shakira] was a nice experience, and I'm going to be grateful to her for the rest of my life."