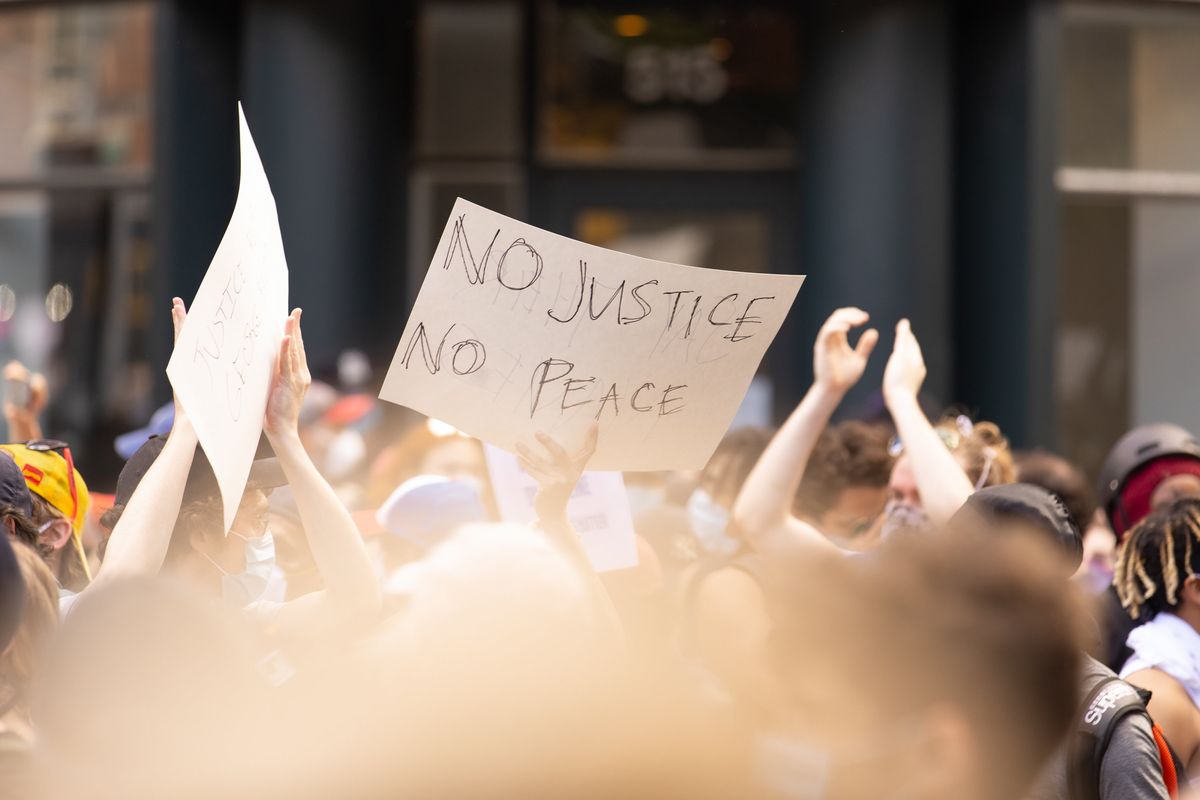 The protests that intensified on Friday reached at least 75 cities across the country on Saturday. Many major cities, from Chicago to Los Angeles, joined Minneapolis in implementing curfews. The National Guard was called in to join police in 11 states.

Protests in New York began in the afternoon and continued until after midnight. While Friday's protests mostly occurred in Foley Square and parts of Brooklyn, Saturday's protests permeated most of New York City. Thousands marched on Harlem, the East Village, Times Square, Columbus Circle, Jackson Heights in Queens, the swathes of Brooklyn, in addition to neighborhoods in the Bronx and Staten Island.

Some protestors in Brooklyn calling to loot the Target, but organizers are rushing in front of the store to stop them, keep things non-violent #nycprotest pic.twitter.com/6x70cpcjep

The majority of the protests remained peaceful. Protesters and activists praised New York-based organizers for calling for peaceful demonstration, boosting a video where organizers blocked a Target to discourage looting. Despite this, protesters continued to be met with violence by the police.

In a viral video, reflective of the force subjected to individuals, officers appear to remove the mask of a young black man in order to mace him. One of the day's most horrific moments occurred on Flatbush Avenue in Park Slope, where two police S.U.V.s drove into a crowd of protesters who had blocked them in with a metal barricade.

This boy had his hands up when an NYPD ofcr pulled his mask down and pepper sprayed him. ⁦@NYPDShea⁩? Mayor ⁦@BilldeBlasio⁩? pic.twitter.com/YtXDOoVckA

In a late evening address where Mayor Bill de Blasio called for protesters to go home, he refused to condemn the officers involved in the S.U.V. incident. He called it "upsetting," adding, "I'm not going to blame officers who are trying to deal with an absolutely impossible situation."

As of Sunday, the mayor's response was widely denounced, including by Representative Alexandria Ocascio-Cortez. Critics say that as the police department falls under his leadership, so do their actions. #ResignDeBlasio trended on Twitter late on Sunday morning while he gave a press conference. In that presser, he said he won't implement a curfew and continued to toe the line between expressing support for protesters and the police.

@NYCMayor your comments tonight were unacceptable.

As mayor, this police department is under your leadership.

This moment demands leadership & accountability from each of us. Defending and making excuses for NYPD running SUVs into crowds was wrong.

I spoke with a protester who reinforced what he experienced was police force in response to peace protesting and de-escalation. The 36-year-old Black male says he was near Fulton Mall in Brooklyn at around 11:30 PM "barely protesting, just there" when another protester hit the ground. He says in a moment of confusion someone threw a water bottle and cops quickly mobilized to start pushing protesters on the sidewalk. There was a loud noise and a lot of movement. In the chaos a woman fell down, who he tried to help up when he was hit on the back with a baton by an officer.

Moments later, as he was helping a young man who was bleeding from near his eye, the protester I spoke with was maced. His glasses were knocked off and his mask was torn off. He removed his shirt to use as a mask to both prevent his face from being visible and due to COVID-19 concerns.

Shortly before leaving the scene, at around 2 AM, the protester I spoke with used his bottle of water to tend to another protester who had been maced. He reassured the protester that the pain would subside, as it had begun to for him.

Brooklyn this morning. People wait in line 6 feet apart to get into Whole Foods. The walls behind them are tagged BLM and FTP. pic.twitter.com/OwSabuMauG

At around 9 AM on Sunday, a few blocks from where that protester was maced, morning shoppers lined up to get into the Downtown Brooklyn Whole Foods from six feet apart. They queued in front of the white wall that was tagged BLM, FTP, and Fuck 12 last night while a single worker in a mask began the work of scrubbing the spray paint off the wall — a fresh slate for a new day, with more protests scheduled.

How to Support Protestors in Every City