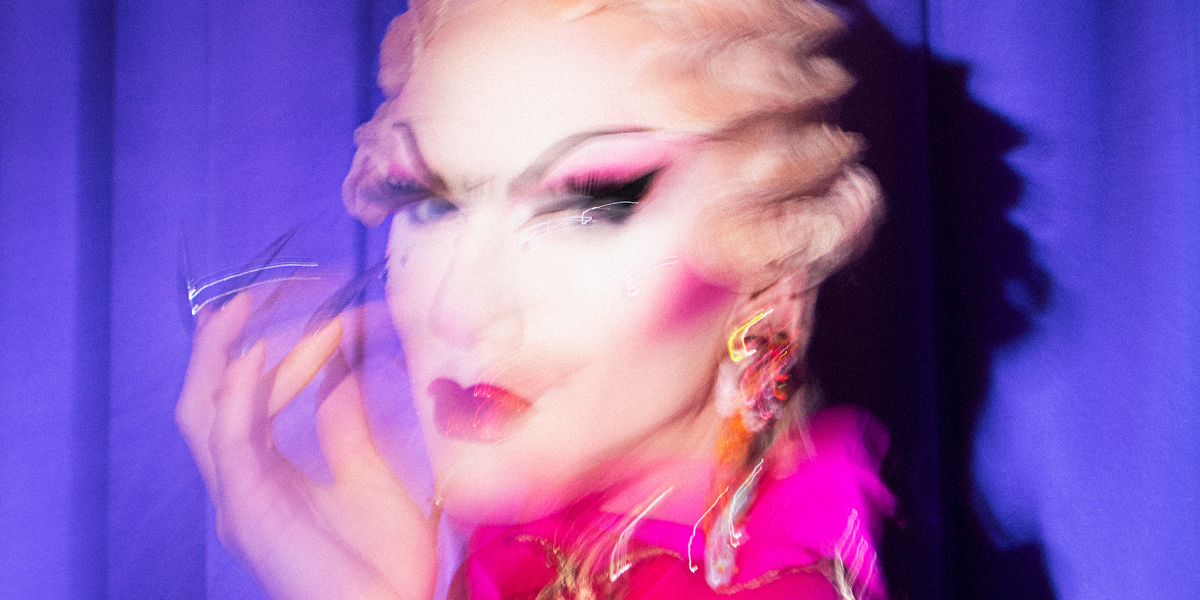 When Sasha Velour began hosting a weekly drag revue six years ago in Brooklyn, there was no way she could know that her show, dubbed Nightgowns, would prove itself to be a cultural touchstone, both for her career and queer nightlife. Featuring an ultra-diverse cast of local drag queens, kings and every kind of performer in between, the Bushwick extravaganza quickly evolved into one of the most notoriously fun and creative events a fan of drag could experience. Its notoriety helped Velour get onto and eventually win season nine of RuPaul's Drag Race, and the show itself was made into a docuseries (originally for the doomed Quibi platform and recently moved to the Roku network).

Now, with the world reopening and New York City blossoming for Pride once more, Velour is back at work with Nightgowns: The Musical, a live and in-person theater production playing at the beautiful Connelly Theater in Manhattan from June 19 to June 27. The eight-show run brings back all the best that the original Nightgowns had to offer, but elevated by Velour's years of experience and strict attention to detail.

Nightgowns: The Musical is breaking away from its progenitor by changing the format; instead of separate performers with their own worlds and stories, this Nightgowns will have one story which all the players will take part in. A cohesive storyline, one that runs throughout the show, makes this iteration closer to a musical or play than a traditional drag performance. Yet it's that kind of ingenuity which makes Sasha Velour (and her incredible team of collaborators) so special: we expect the unexpected from Velour. Who can forget possibly the most unexpected reveal of all time, when she removed her flaming orange wig during the season finale of her season of Drag Race, to reveal a cascading waterfall of hidden rose petals? It was iconic, daring and so surprising it got her the crown.

We sat down with the legend herself to discuss Nightgown's origins, what we might expect from the musical, being in control of her own queer narrative and what we should be focusing on this Pride season.

Would you please describe the genesis of Nightgowns for the folks who may not know its history?

Nightgowns was a traditional drag bar show. It started on Thursdays at 11 o'clock at night in Bushwick, at a bar called Bizarre. It was within walking distance from my apartment, but I think it's closed now. My goal in hosting a show was to celebrate all the different forms of drag. Usually, for an up-and-coming queen, your only option was to go to drag competitions to get noticed. I was doing that, and meeting a lot of people, but never winning anything. Always a bridesmaid, never the bride. Usually third place. But I didn't want to do a competition, I wanted to do a party where every performer felt their winning moment. And I wanted to have a show that had all types and genders of drag, because I really wasn't seeing that. And I guess I was right, because it got popular quickly. I think it's the reason I got into Drag Race. And then the attention from Drag Race brought so much more awareness to Nightgowns. And as a result, it kind of has never been the same show twice. It continues to expand, as it's doing now with Nightgowns: The Musical.

The docuseries about Nightgowns recently moved from the Quibi platform to the massive Roku network. How's that going so far?

There's a lot of mainstream queer culture right now. People are consuming it and interested in it. So it's a good time, I think, to try to share different kinds of queer stories. I guess I have my agendas — the political element, the anti-authority stances of the community, a respect for the history and the generations past that we're built on. I want to keep those messages strong. I think that's the vibe right now. But I'm still not seeing a lot of queer people in production and top tier roles within the creation of queer media. Drag artists directly involved in creating drag-related TV shows, or artists from the ballroom scene directly involved in TV shows about ballroom. I'm curious to see that shift. I've had to fight to make sure that my projects are like that. When people are telling their own stories, the chance of showing something new and beautiful is so much better.

So Nightgowns: The Musical will break away from the original's format, in that instead of performers acting within their own worlds and stories, they will all be key players in a cohesive narrative. Why the change?

It was totally a creative impulse. I wanted to unify the fantasy worlds that get built during a drag show. When we were looking again at Nightgowns coming back, we realized that the revue format, where each performer gets their moment and is alone on stage, was not the right energy for this year. Creatively, we've all been stuck in our own worlds because of COVID for over a year. Every drag show you tune into is recorded from someone's apartment. So when it came to coming back and doing a show in person again, we wanted to be on stage together, telling a story together, supporting each other, in the same room, in the same number, in the same song.

I can't wait to see the story!

It might be totally insane. And I'm prepared for it to be absolutely bizarre.

Can you give us a little taste?

We're doing a sci-fi, campy, drama-musical, about the process of drag. An epic read of drag in our time, but filtered through a complete parody of drag from 60 years ago. Wild group choreography starring seven people who can't dance to save their lives, yet will be trying their hardest. And the usual mix of Shirley Bassey, Diana Ross, Kylie Minogue, Tom Jones, Britney Spears. The kind of performances you want to experience. But all together in one story line. It's gonna be amazing. I think people will be shocked, hopefully, by our approach.

It sounds incredible. Well, it's that time of year again… happy Pride! Who in our lovely community inspired you throughout the heinous year of 2020?

Happy Pride! It's so hard to narrow down... I got Susan Stryker's book Transgender History and read through that really fast. And even though drag isn't really specifically mentioned in that account of trans history and is more on the side, I feel like it's the same story. Non-binary artists carving out these performance spaces is completely part of the fight for trans existence and visibility and rights. It was depressing being trapped inside as all this anti-trans legislation went through. People need to realize that this is not a new scary liberal phenomenon, but actually deeply part of human history. I also really got into Legendary on HBO. I love seeing queer people put on amazing performances and dance and entertain. All my stunts are nonphysical stunts, things I can stuff into my costume, because I cannot! Oh, and I watched Portrait of a Lady on Fire. I strongly, strongly recommend it. Romantic, French, art, lesbians, through time. Incredible.

This Pride season feels different after all that's happened… What do you think we, as the LGBTQ+ community, should be focusing on this Pride?

I think Pride is meant to be coalescing around political issues. I think we should still be protesting against police violence, against anti-trans legislation, protesting for affordable medicine and medical care and housing. At the same time, I realize that Pride is often a time when queer people who struggle the rest of the year have more job opportunities. I'm talking to people who are getting booked again, and that's a very positive shift. But I would love to see year-round changes, not just suddenly in June, people remember to support queer local businesses.