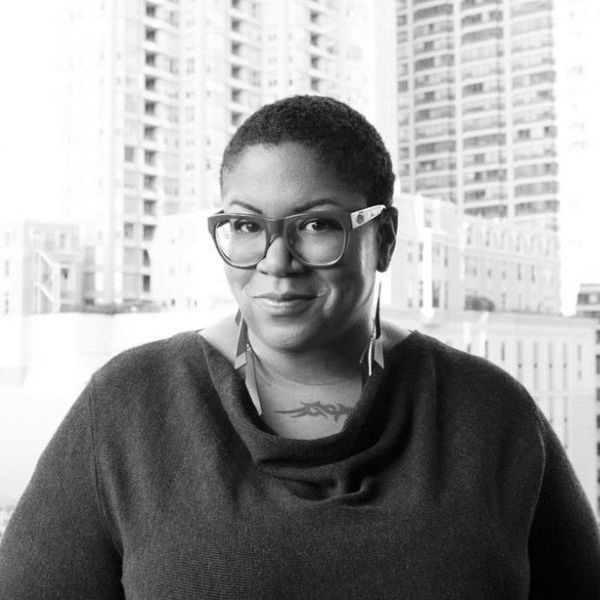 But ask me who my favorite author is and I won't hesitate to reply with, "Samantha Irby." I love Irby's books so much that I would, without a shadow of a doubt, flip to a random page in any one of them, close my eyes, point to a sentence, and tattoo said sentence across my clavicle. That's how much I love this woman.

I sat down with the bestselling author/my hero to talk what it was like revising her debut, married life, and the possibility of a television series.

Would it be too melodramatic to say that it is one of the most horrifying experiences of my dumb life? The dope s**t about having a book you wrote about your life is the "WOW, I HAVE A BOOK" part, and if I could just freeze my life on pub day and then drop dead that would be amazing? But you can't, and 10 minutes after it hits the shelf it's like, "OH NO, I AM A DIFFERENT PERSON NOW THIS WAS A MISTAKE." I'm sure Toni Morrison looks back at her old work in awed silence, but I can't read some s**t I wrote last week without wanting to chew my wrists open in embarrassment. The first pass through the essays, which I didn't get to change because blah, blah, integrity, blah, blah, preserving the tone, I wanted to die. I haven't read these pieces in years, and I can't stop cringing reading them now. Why did I curse so much and in so many different forms? How many ways can one person write what a groan sounds like? Who is this piece about again? Five years have passed and it's excruciating to me. It's like a time capsule of every ridiculous thought I've ever had. Can't wait to look back at this when (if) I hit 50.

What's new in the re-release of Meaty?

Well, I lost my sad chicken. And all the commas and periods are in the right places this time. Also, a lawyer had to read it to make sure the publisher can't get sued because I said some wild, unsubstantiated s**t about one of my exes.

Basically, we looked at all of the essays and put them into groups that make sense, then I researched (I mean this in the loosest possible sense of the word) a bunch of new recipes and wrote them in a way that makes sense but is also realistic and funny. The essays pretty much stayed the same except for copyediting clarifications. But I did change the acknowledgments because in the first edition I thanked a lot of assholes I don't f**k with anymore, and I'll be damned if I thank some asshole who burned me between 2013 and now. I was combing through that s**t like "not you, nope not you, you either..." and for five seconds I was sad because clearly I'm hemorrhaging friends, but then I just looked at some inspirational infographics on Insta and got over it.

In the first chapter of Meaty, you mention that your "novel is finished but unedited and unpublished because [you] busted [your] laptop and can't afford a new one right now." What happened to said novel? Do you have any plans of releasing fiction down the road?

Okay, so here's my conundrum: that old laptop got ruined when the ceiling in my s**tty old apartment collapsed and a deluge of water rained down from above and destroyed all of my worldly possessions and, like a real piece of garbage, I had my novel saved on the hard drive and backed up nowhere. So, save a handful of chapters I had printed out and tucked in my sock drawer, I lost the whole thing. Which is probably for the best, because whatever I was going on in my head circa 2004 is probably better left dead and buried. I did type up those chapters I salvaged and have started the process of shaping them into the beginning of a YA novel, which I think could be dope if I could ever settle on what the point of conflict should be. I am so much more timid with my fiction than I have ever been writing about my own life; I'm so protective of the characters and this world I've created; it's like, if you hate me that's fine, I am a product of bad genetics and my environment, both of which I have zero control over. You think I would've picked the parents I was stuck with if I'd had the opportunity to choose? I'm doing the best I f**king can with all the disparate pieces of garbage I was given to carve an existence out of, so if you don't like it cool because guess what, NEITHER DO I B**CH. But a novel is different, right, because if people don't like it that means that my brain, the one thing I'm mostly proud of, came up with a Bad Thing. A Bad Thing it had complete control over. That's a terrifying prospect! I'm gonna write it, eventually, and I'm gonna have my agent (who is very mean) read it and really level with me about whether or not it should see the light of day. If he says no, I'll just keep writing about my butthole and Tom Cruise. I'll just stick with what already works.

Part of me is worried that I'm boring now, although the part of me that was tired of being on a merry-go-round of constant rejection is actually pretty f**king relieved? Bad dates are fun when you have a sense of humor, which I definitely do, but at some point when you're chronicling it it's just like WAIT IS SOMETHING ACTUALLY WRONG WITH ME? The thing that sucks the most is that my wife is smart and cool and that hamstrings my comedic material a little bit, because there's less to make fun of. Also, like, where am I gonna go? It's one thing if you clown someone who lives across town, but I can't just go nuts on her on the Internet and then stroll in the kitchen on some "Hey girl, how's it going?" s**t. I never want her to feel like she can't relax in her own home because I'm mining her personal life for comedic material. I'm still miserable and terrified of everything, so my interactions with the universe at large haven't changed; I've just gotta tread lightly when making fun of homegirl's organic pea garden and the staggering number of reusable public radio tote bags in the house.

I know you've announced that you're working on adapting Meaty into a potential television series with Jessi Klein and Abbi Jacobson. Can you tell us more about that?

Trying to make a TV show is weird. The entire process is basically terrifying, especially when you're trying to convince a conference room full of attractive Hollywood people who don't visibly sweat and look like they belong in a toothpaste commercial to make a television show about your ugly, fat life. We were developing the show with FX but we aren't doing that anymore, so I just did another round of going to fancy network offices where actual celebrities make things you actually get to see on television with Jessi and Abbi and died on the inside while trying to coherently explain our idea for a hilarious show about diarrhea and bad sex. I don't even know how to describe feeling like you're not even good enough to look at the person you're talking to? I mean, I walk in those rooms and am immediately like, "Turn around and go home, idiot, her haircut is more expensive than your car!" So we wrote a pilot based on one of the essays in Meaty and by hook or by crook we are making this f**king thing into a show you can bootleg from a basic cable provider, it's just not clear where. Or how. Or when!