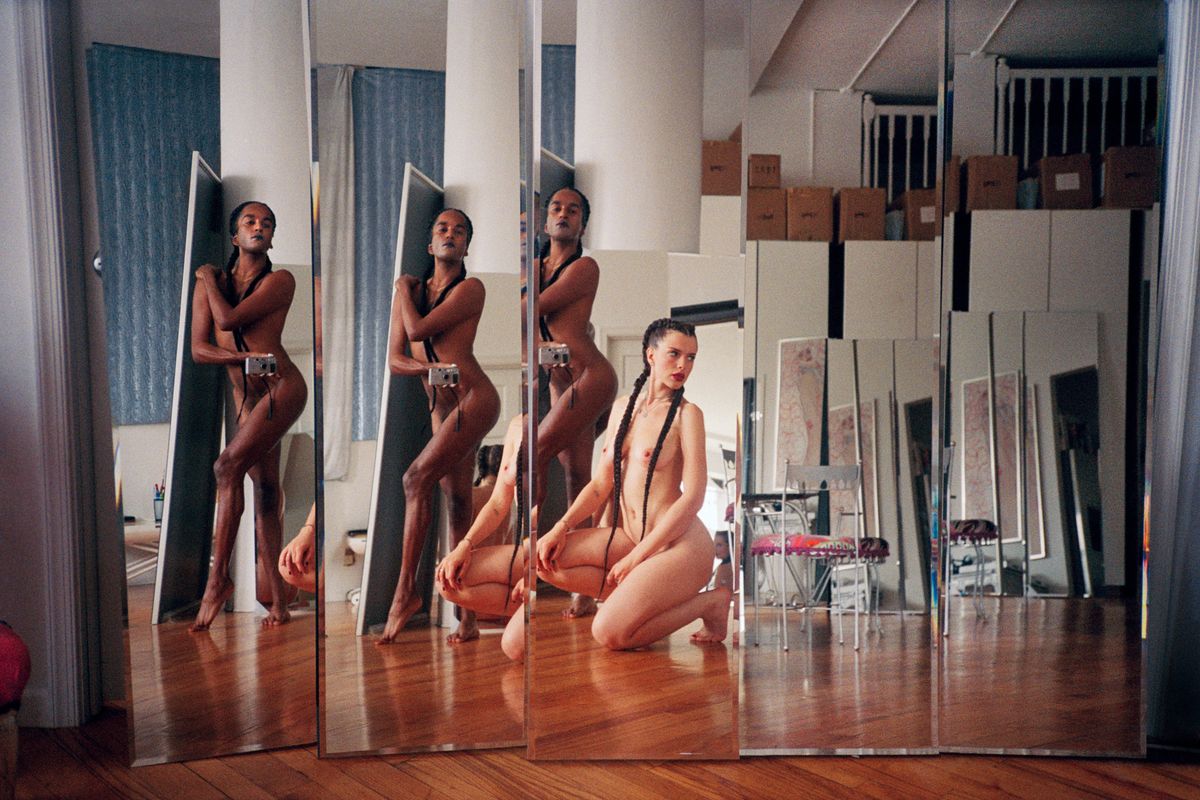 Ryan McGinley, a New York photographer and artist who's created iconic images of everyone from Beyoncé to Lady Gaga, has built an illustrious career of capturing superstars ruling art, fashion, and music worlds in vulnerable, playful, and powerful moments.

For his newest project, a full-color photo book complete with poetry, prose by Ariana Reines and an introductory essay by McGinley outlining his inspirations (home, family, and the human form), he encouraged 180 subjects to find their own light, utilizing the ubiquitous and timeless form of self-capture: mirrors.

Mirror Mirror, out now through Rizzoli, allows subjects to experiment with what they see in their own reflection, guided by McGinley's instructions culled from on-set experience, which range from playful ("fake laugh," pretend you're a "paparazzi in one frame, celebrity in another") to affectionate ("cuddle and kiss your pet"). Subjects were not allowed to edit, as they shot themselves using five rolls of film each, which McGinley went through and edited down to one image per model. Another caveat: the participating models were all nude (NSFW warning), and they took their "Sol LeWitt selfies," as McGinley calls them, in the privacy and comfort (or discomfort) of their own homes.

Mirror Mirror then arrives as a beautifully curated collection of humans being nakedly human. McGinley writes poignantly about the people in the pages:

"Mela is the only model that appears twice; she completed the project pregnant, and then again with her beautiful daughter Amethyst after she gave birth. A champion of artists' books and publications and a fan of being in the buff, Shannon sadly passed away a few months after he participated in this project. This is one of the last nude images taken of him. Marc's 5th floor apartment is rent controlled, which is one of the most coveted things to have in New York City. He's a Williamsburg lifer and has been in that space for 25 years. I spent 10 years of my life visiting him there when we dated. Imma is a transgender woman who recently completed facial feminization surgery. I think about her happily becoming the person she sees herself as in that apartment."

PAPER caught up with McGinley to talk about the process of creating Mirror Mirror (which you can buy here), and freewheeling creativity. See exclusive shots from the book selected by McGinley, below.

I honestly just went through my address book on my iPhone and reached out to basically everyone I could in it, and told them I'm doing an instructional project with set instructions. There is a narrower element to it and you photograph yourself and your apartment. Basically, these are the people that got back to me.

I found the instructions themselves really fascinating. I know they came from years of you giving them on set. Was it difficult or easy to create this particular project?

It took a day to go through all of them and figure out what I [should] really tell people to do, and I worked with a few choreographers over the years, who've helped me finesse these instructions. On nearly every shoot, I have somebody who's a dance teacher, a choreographer, or a hype guy or hype girl — people that have taken on different roles [in this capacity] over the years. Since the models would be at home, I was thinking a lot about what we always tell people to do in their apartments, so that was an element of it, and then the normal photography thing where you ask someone to bring their arms above their heads, lean on their sides, or jump side to side. I think I've arrived at about 200 ideas or suggestions that I give to people.

The instructions ranged from lighthearted to more serious. The most common one used was "find yourself in your reflection," which feels poignant.

When the mirrors come into the picture, quite literally, it creates an environment of home in your space, and it was interesting to see what everyone did with that. Basically the whole point of the project is to be playful, to have a lot of fun with it and to just explore yourself. I feel that I've spent so much time photographing people and exploring their emotions and movements. That's my job when I'm taking a portrait of someone. It's interesting also to see people who might not usually take these kinds of photographs, to see them have all this time to explore themselves in their apartment.

It all ties into the themes of home, family, and discovery that you often work with and write about in this book.

I also love looking at interior magazines. It's my favorite thing. I love seeing how people live. I feel that a lot of magazines don't really show how artists really live. For this book, 90% of who's in it are artists — artists in NYC who jam pack everything into the space, or who are super organized. You get to see people's paintings, land pictures, posters, albums, art books. If you're a musician, there's a guitar; if you make ceramics, there are bowls and plates everywhere. So it's seeing what people collect, what they value, what they hold onto, and what it means to them. It's fascinating.

You even write that how people live tends to be a reflection of what is going on internally, which is so true.

Yeah, I really just wanted an authentic feel to this. And what's cool about mirror reflections, especially when there's clutter, they refract what's there, and somehow make it look better. There was no wrong way for the models to do this, in my eyes.

I was curious about the nudity component. As you went through and edited the film rolls down, did you feel like nudity inhibited people or freed them?

I think it freed up a lot of people, because when you spend so much time with yourself photographing for five rolls, a lot of people came back to me and said that by the end of the process, they were more comfortable in their skin. It was cool to see some of my older friends, in their 50s and up, who had never been shown in this light. Sometimes people would at first appear self-conscious but you could see them open up. That was super fun and it was cool to see people become more liberated through the film.

"This is more about putting power into the subject's hands. It's about flipping the script."

The process of being unable to self-edit maybe makes it a little freeing, too. As a culture, we can be overly vigilant about our own self-image, which can come through in anyone's camera roll on iPhone selfies.

It's good practice, because for me as a photographer, I am always editing my photographs in a way that I think defines the moment. But also, I'm always trying to achieve reality. It's like being a fly on the wall in other people's lives. But if you think of photography as a window into how someone lives, or experiences a private moment, it's sort of like talking about windows in people's apartments. There is always someone that you can see when you look out the window. For this book, it was like seeing the view of what others see when they look out their window in New York City. In lots of the shots, there are people positioning themselves in their windows, and from that you can see skylines and incredible views. It's like you're there, but you're not. And what I think is interesting, is how even in a tiny New York City apartment, you still transform and grow. I love the idea that Imma's apartment is like this character that witnessed her transition. And we as the viewer just get a glimpse of that.

So often when we talk about image-making, ideas of the male gaze come up, but in the moment of capture in this book, when the only person looking or gazing is the subject, how do you feel that changes things?

I think it's interesting when somebody is getting into a photo shoot environment, it can be creative for them and then they're taking these suggestions from professional photographers and bringing their own spirit into it, their own personality into it. It's ultimately their personality shining through. For instance, if I photograph you, you are bringing so much into the picture, you are bringing personality, style, or whatever emotion that is happening at the moment. So this is more about putting power into the subject's hands. It's about flipping the script.

What do you hope people who find this book learn or gain from it?

I hope that people who get the book and instructions will actually will participate in it. In the instructions, you don't have to get 20 mirrors, you can collect as many as you want. But I really want people to be playful with it and have fun! Have an art project that you can do on a Saturday and pick out a cool photo and do whatever and post it on social media using the hashtag #mcginleymirrormirror. What I want to encourage is the spontaneity of creation. If you can take some ideas a photographer uses to create their world, and you get a photo back of your own, it's sort of a mirror of theirs. So it's like we always mirror each other. How fun is that?