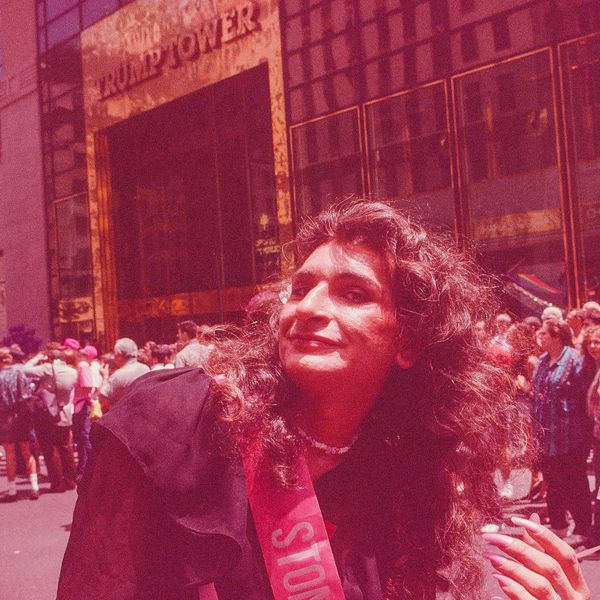 Fifty years have passed since police broke into New York City's Stonewall Inn and began arresting and brutalizing its queer guests. As has become legend, the patrons of Stonewall fought back — shoving, punching and throwing stones — launching historic riots that would last six days. Within a year, the first Pride March, then known as the Christopher Street Liberation Parade, and the foundations of the contemporary LGBTQ movement were born.

Nine years later, photographer and longtime friend of PAPER, Henny Garfunkel (who captured Brooke Shields as a drag king for us in 1990) shot her first Pride march. A mainstay in the downtown gay scene of the '80s and '90s, headquartered at Club 57, Henny started going to Pride simply to support her friends like Tom Rubnitz, Keith Haring, Rollerina and Lady Bunny.

"As the years went by, the powers that be started to notice what a major community we were."

The colors, costumes and combustive emotions of Pride are any street photographer's dream, but for Henny, the event became a muse. She captured nearly every NYC Pride March between 1978 and 1996, a period of both radical vibrance and terrible pain for queer Americans.

"In the late '70s a bunch of people would just plan to go, you know? We would all march together. It was very joyful." she recalls. "Then the AIDS crisis came later in the '80s and it became a lot more serious and political. It became a protest. I mean, it's always been political. But as the years went by, the powers that be started to notice what a major community we were.

Henny's archive shows Pride as the shape-shifting phenomenon it is: a day that has become whatever the queer community needs. She shows Pride as a party, a protest, a funeral, and a battleground.

Lovingly lighting naked embraces and proud poses, her photos archive the euphoria of people living in a country that hated them, on a day that was a snaphsot of an alternative future. They celebrate the shrewd creativity of queer political speech and fashion, in the glorious shots of home-spun drag and kitsch protest art. They record the origins of icons, like RuPaul and Sylvia Rivera. They honor the rage and sadness, plucking out glares and silent screams, amid smiles and kisses.

"Pride had this conviviality: a little bit of Mardi Gras, mixed with Halloween. Just let your freak flag fly, that's the best way to put it," Henny describes.

Her images don't neglect the hatred lurking just on the other side of the barricades, exposing the counter-protestors who used to gather along the parade route and at St. Patrick's Cathedral. Among the attendants, they also trace the trajectory over time, of queer culture's precarious relationship with the mainstream, as increasing numbers of "Grandma for Gays," and "I Love My Lesbian Daughter" apparel and and politicians like Rudy Giuliani join the ranks in her photos, while "allyship" and the "gay vote" became household terms.

The fact that Pride looks different now — like Coachella, stripped of radicalism, compliant with police, bloated with rainbow capitalist cash from investors who don't question how their day-to-day business hurts queer people — is something of a broken-record conversation. "Now Apple or Chase Bank has a float. There was very little advertising back then," Henny remembers. "It's slick, but back then it was rough, homegrown. It was more which tribe you were associated with, the Pyramid Club or whichever."

"Remember that you're standing on the shoulders of the people that brought this, like Marsha P. Johnson and Sylvia Rivera and all the people who fought the fight. Celebrate that.

Queer culture's reckoning with its rising appeal to the mainstream seems to become more existentially complex each June. "Everything changes. The world is caught up to gay culture, in some ways. RuPaul's queens are on the cover of New York Magazine," Henny says. "We live in a really strange time, a horrific time. Trans people are still getting murdered. AIDS isn't a crisis, but healthcare is. It's not a good time for gays right now, even if they get the cover of magazines and some communities celebrate them. I think the larger culture doesn't want to see this."

An indisputable beauty of Pride is opportunity for reflection and remembrance. Half a century after Stonewall, and as World Pride converges on NYC, it's more crucial than ever to remember how we got here, however we conceive of this place. So this June, PAPER asked Henny to pick 100+ photos from her archive to help us remember.

"Have the greatest day possible, just remember that all this came before you," Henny says, asked what she hopes her photos will mean to young people. "Remember that you're standing on the shoulders of the people that brought this, like Marsha P. Johnson and Sylvia Rivera and all the people who fought the fight. Celebrate that. Celebrate the history. Celebrate who you are. I think that's still hard for lots of people."