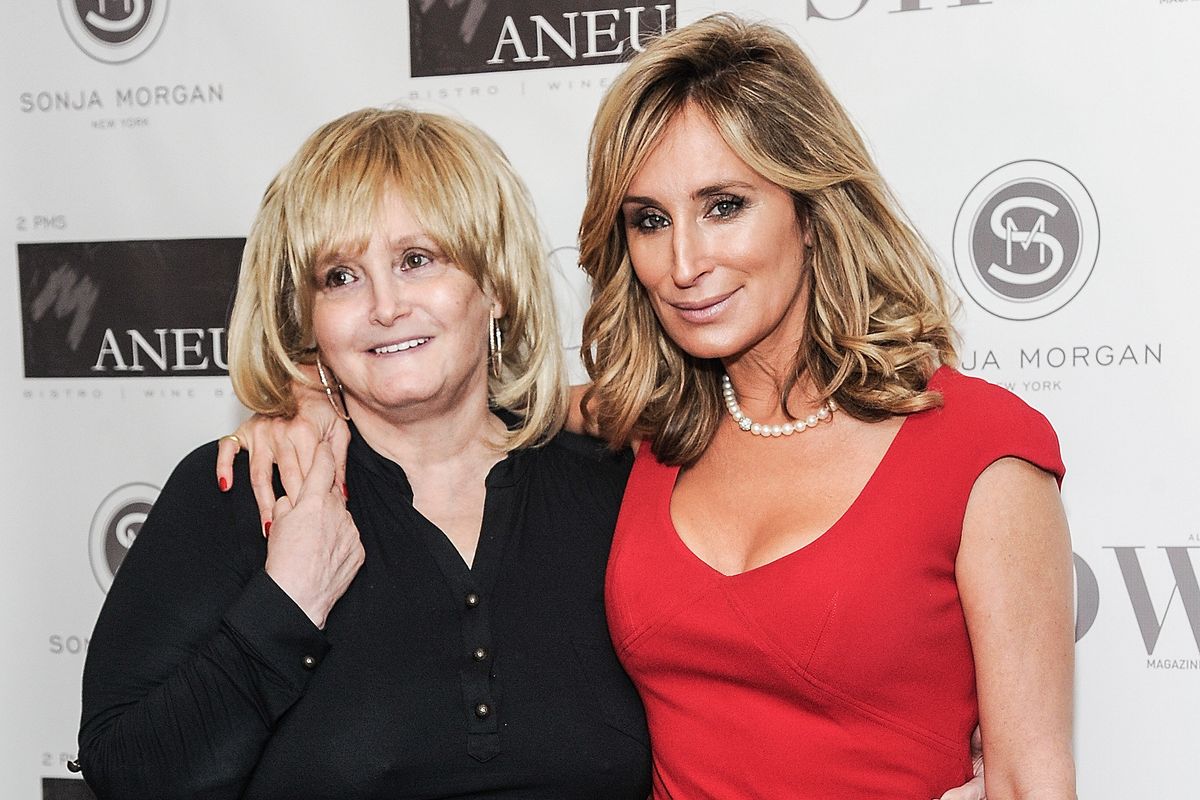 If you're a fan of Bravo's Real Housewives of New York (which should be all of you), you're familiar with Roberta Tavassoli, the resident "advisor" of Sonja Morgan, and a clairvoyant. It also means you're familiar with her particular brand of wit, raunchy humor, and directness, which feels tailor-made for the control-room aspects of reality TV. Within moments of sitting down with her, Tavassoli notes her desire to help "uplift people" with her upfront conversational style — "like my tits," she adds.

But off-camera, as the story goes, Tavassoli's supernatural talents divinely intervened with Morgan's own reality in 1996. Through a powerful vision, Tavassoli "saw" a plane crash for Trans World Airlines Flight 800, which was headed from New York to Paris. Morgan was slated to be on the flight, along with other friends of hers. When Morgan told her advisor that she was due on the flight, she was urgently warned to cancel her flight immediately. Morgan followed Tavassoli's advice, and when the plane did in fact crash into the Atlantic Ocean on July 17, 1996 near East Moriches, New York, all 230 passengers and crew members aboard Flight 800 were killed. The cause of the tragic incident was a fuel tank explosion, although conspiracy theories exist.

Morgan's life was spared, but for Tavassoli, the deadly incident was one of many premonitions she'd experienced since childhood. As she aged, Tavassoli worked to live a more normal life, despite recognizing what ultimately became her paranormal talents. She got a paralegal degree, married and had a child.

When Tavassoli finally leaned into her gifts of seeing past, present, and future dimensions, she was in her 40s. With an endorsement by famed paranormal researcher and author Hans Holzer as the real deal, Tavassoli ultimately developed the confidence to intuitively guide her own destiny, and help others do the same. But as PAPER found out, communing with spirits and entities isn't all it's cracked up to be. "You don't want this gift, I'm telling you," she confides.

Her message, whether you are a believer or a cynic, is a positive one. In her readings, her on-camera personality shines through: as mentioned, she's just as charmingly off-the-cuff, hilarious, and totally outrageous in the flesh as she is on Housewives. Read our sit down with Tavassoli to learn more, below.

How would you best describe what you do?

I like to help people. I want to leave them feeling better. I want to give them healing energy — very uplifting energy, to keep people uplifted, like my tits.

As a kid you knew you had the gift of clairvoyance. What was that like for you?

Very isolating. I was getting all these messages and talking to dead people. You have understand something: when you die, you have something called a silver chord. It's in you and attached to you, something like a spiritual parachute. So when that parachute opens, you lose 30 pounds and look 30 years younger. Why the fuck can't I have that now? You don't want this gift, I'm telling you. So anyway, in the afterlife, you're happy. No one's sick anymore. Everyone [in the afterlife] is happy. On the other side, there's no fighting.

What are your thoughts on heaven and hell?

I think if you're someone who has committed suicide, there's nobody waiting for you with a pitchfork.

"Think of me as a phone booth on Christmas Eve. I'm just the message."

Would you get a TV show of your own where you talk about these things?

Of course! I'm witty and funny — the rest of them look like they're dying. You think so? The Long Island Medium — I went to a charity a while ago in Belmont, and they didn't realize I'd been on TV [with the Real Housewives of New York]. Who else was there but the Long Island Medium's [now former] husband [Larry Caputo]? They all freaked out when I was there and said she's a pet psychic! And yes, I do talk to pets when I see them, and humans, too. You're very spiritual, right? You didn't used to be as much but you are now.

I am actually, but like, what do you do when you pick up on, say, darker energy?

I don't really pick up on darkness, because I try to do something uplifting [with my readings and interactions]. Think of me as a phone booth on Christmas Eve. I'm just the message. Anyway, what's coming through now is you may get hit by a donkey in Italy, but you won't die in a plane crash. Are you afraid of flying?

Related | The Higher the Hair, the Closer to Spirit

You always think you're going to die on the plane. There is always turbulence, your stomach doesn't respond well. Did someone around you die or kill themselves? There were a few recent ones.

Two friends of mine died recently.

Does it feel cloudy? Regarding love, you always meet players. You pick the wrong people to love. Why is that? They're so beneath you. There is someone named Maria hovering around you. She's protecting you. Is she related to your mother?

She was my mother's mother. How did you know that?

She wasn't well. Mental health? She'd be treated for that now. She had a sad life. She's well now, and not coming around being crazy.

I believe she had —

Schizophrenia? She wasn't crazy — no one understood her. And there was also a dog. Labrador.

I did have a black Lab, yes. She died.

At about nine months, right? "Sadie, sweet Sadie, my lady."

Her name was Sadie. How did you know that?

Did she also have kidney problems?

That's what killed her. Wow, this is so weird. What do you think of witches? They're so prevalent in pop culture these days.

They weren't bad! They were connected to the earth. They're still here with us. I think there's a negative stigma around them. There's a difference between magic used for evil and magic used for good.

You choose goddess energy? That makes sense for you. Now if you're into spells, don't do an attraction one for a guy to go out with you, because that may be against his will. It doesn't work — I've tried it 100 times! I'm still alone. Affirmations work much better.

Do you ever give people mantras or affirmations?

It's funny you ask: I do. Your last partner... was he depressed? Had a pissy attitude?

You deserve better than that. Your mantra is this: I want people around me who empower me, not wear me out. You say that every morning when you wake up. You don't go to clubs much anywhere, do you?

Well, get prepared! I'm not crazy, I'm just funny. Get the Crisco. It's 100 years old but apparently people use it. What do you think, I'm psychic!

Where will I meet him?

Go to Florida. Art Basel. He's very cultured. Find a way to go there for work.

Do you believe in reincarnation?

Of course I do. You're connected to Florence. Also, do you like the idea of being in a Tuscan sunset?

Have you watched Mama Medium? It's tacky. She's a fat pig. I'm not exactly 20 pounds either. There are so many bad mediums out there.

"Let me tell you three things: There are no coincidences, there's order to everything in the universe, and the universe makes no mistakes."

I met a bad one who gave me a reading in Coney Island.

She told you that you were cursed?

Because it most likely was. What I can tell you is this: You're not going to die young, and in fact, you're going to have a long life. You don't get out that easy. You'll write a book or a movie, called Assholes I Have Met. [Laughs] You're attached to ancient Egypt, did you know that?

What do you mean?

You come from royalty. Embrace that. You were part of a line of pharaohs. You were highly protected and this life has helped humble you, learning how to help people, and give you more compassion. We come back because we learn lessons. We come back in soul groups. I'd rather be on a throne in ancient Egypt than in this horseshit.

Amen. I know what you mean.

Let me tell you three things: There are no coincidences, there's order to everything in the universe, and the universe makes no mistakes. If you're on Path A, the universe will push you to Path B where you're supposed to be. Don't say you have regrets. You're here for soul growth.

What about people who murder others, or commit otherwise violent acts against humanity? What about their destiny and purpose?

I think some people do that because maybe they were murdered in a past life. Sometimes people come back for that. I don't know any — I'm not seeking them out. But seriously, I think they have to learn in this life to be better. And of course, some people are just bad seeds, born evil. Some will do anything to hurt someone else. Who's Michael? Is that your dad?

Yes, I'm named after my father.

He wasn't very good to you in the beginning, but he had a hard time with your mother. I can see that. But as I was saying, there's evil within us and also God within us. You had one evil person around you, from Chicago, about five years ago.

"Are certain stars cursed? I think they feel like they are or maybe just want attention."

I told you: I'm fucking psychic!

What do you think of celebrities who are cursed? Do those theories carry much weight to you? There's the whole mythology around the "27 Club" and, recently, the near-death experiences of Post Malone.

I don't believe in curses. But I do believe that if you believe something bad will happen, then it will. Some things are self-fulfilling prophecies, like the laws of attraction. We create our own fate. When you think about the Titanic disaster, there was a book 50 years before called The Law and the Promise by Neville Goddard. Neville was a white guy from Barbados who came to New York. Everyone I've known who is successful has read this book. Let's say you want to be on the Riviera — he says that all you have to do is imagine yourself already there. Or you buy a quilt for $200 and it feels ridiculous, throw away that notion, because maybe it's for your gorgeous future home. Are certain stars cursed? I think they feel like they are or maybe just want attention. You've heard about the Hope Diamond being cursed. I've seen ghosts on the other side.

What do you see over there, on the other side? What's it like?

Well, it ain't the Ritz-Carlton! It's like here, honestly. I can't explain it. It's a joke. There's a man who is married to his wife and they're in their 90s, and they're driving. They're talking about what they want to eat, and then they crash and die, and get to heaven. There's a huge buffet and they can have anything they want. And yet, they choose to go for bran muffins for breakfast every day, like clockwork. That's what they would've done on earth.

To schedule your own reading with Roberta, email her at Rjtav3@gmail.com.