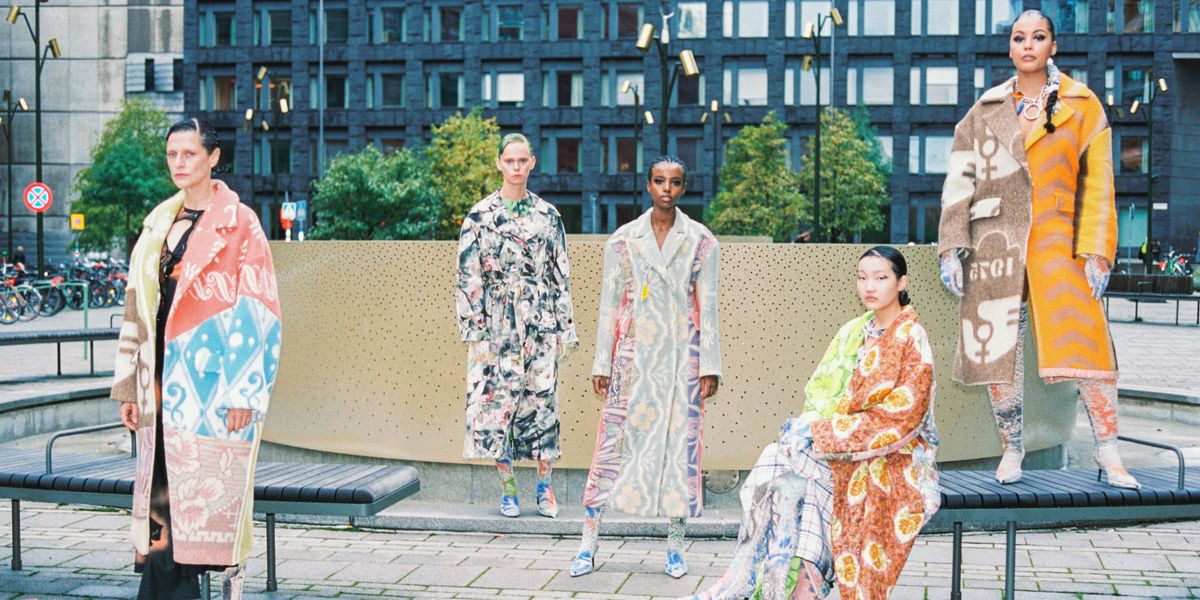 This week marked the official debut of GucciFest, a virtual fashion and film festival headlined by the brand's 7-part miniseries "Ouverture of Something That Never Happened" featuring cameos by Harry Styles and Jeremy O. Harris.

Much like an actual large festival, there are a variety of smaller acts that make up the calendar consisting of emerging and buzzy designers like Collina Strada, Mowalola and Priya Ahluwalia. With the help of Gucci, these brands were able to obtain the resources to put together their own fashion films, which have so far ranged video game simulations to real-life documentaries.

Josephine Bergqvist and Livia Schück, the duo behind Swedish fashion label Rave Review, were among the 15 talents asked to take part in the digital festivities this week. Their 2-minute film "Jord, Luft, Eld Vatten" premiered yesterday, which sees a cast of models taking over Stockholm's central city square to show off the brand's loud statement coats and colorful patchwork pieces.

Since its inception three years ago, Rave Review has been remaking leftover materials and discarded fabrics into stylish, covetable garments with the goal of changing the conversation around sustainability. Their latest collection presented here is a testament to their ongoing process, which is heightened by the contrasts of the bleak cityscape with the graphic nature of their clothes.

PAPER caught up with co-founder Josephine Bergqvist to discuss their GucciFest debut, the process behind this collection and what lies ahead next.

What was it like to be able to show this collection as part of GucciFest?

First of all we think this project is a genius initiative from Gucci's side, the way they present their collection in a completely new way and while lifting young designers like us. They are very forward-thinking in that sense and we believe this project could lead the way to change our industry in terms of how fashion is communicated. For us it means a lot to be in this context — the most progressive side of the high fashion scene.

What was the concept and idea behind the "JORD, LUFT, ELD, VATTEN" video?

JORD, LUFT, ELD, VATTEN [Swedish for the four elements: fire, air, soil, water] is an urban tribute to nature and its sacrality. We wanted to embrace sustainability without coming across as too obvious or "in your face." To manifest how sustainability and circularity is the core of the brand, the garments and models in Rave Review reunite with mother earth, in all the elements of nature. In the film the Rave Review characters stand out and contrast the masses in different environments of a stylized urban life. They make a statement by symbolizing a different way of thinking, acting and they defy the rules of reality.

What was it like to shoot somewhere so dead and quiet when it's usually very busy?

Each look in the collection is unique and aesthetically presented to create a contrast to the silence of Stockholm's central city square "Sergels Torg," or "Plattan" as it is fondly called by locals. It's usually lively and shaped by the buzz of the city, the square has quieted down in between seasons and as a result of COVID. Nevertheless, it was the squares long-standing history as cultural melting plot and scenery of activism, its significance for freedom of speech. Now used by us to trough the collection and film send a message for change.

How has the pandemic affected your design process this season?

Sweden stands out as one of the countries with no lockdown. We have been working as usual since it all started. Our creative process hasn't got affected more than usual, we just get even more time to spend in the studio, which we don't mind really.

How has your approach to upcycling evolved since you first launched the brand?

Our approach towards upcycling still remains the same as we had in the start as we still mainly work with vintage and second hand home textiles. For us it has been important to stay true to our core even when we are growing as a company. The remake production is challenging in many ways, specially when it comes to scaling up, but we're determined to make it work.

Right now we're in the early stage developing a new collection to be presented in February. Along with new collections and activities, the plan for the coming year will be more focused on the business and to take the company to the next level. A part of this is to re-launch the website and shop by the end of the summer, so we finally will be able to offer exclusive drops directly to customers. And hopefully there will be more collaborations like Guccifest!