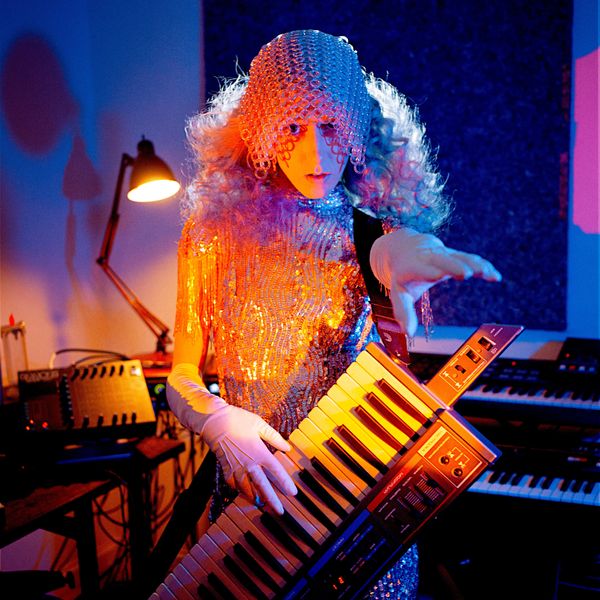 This spring, New York synth-pop artist Rare DM (born: Erin Hoagg) released her debut album, Vanta Black. The LP is a cohesive exercise — or exorcise, if purging yourself of demons is your cup of tea — in ridding herself of dark inner truths by daring to lay it all bare. As pop music has done with impeccable precision through the ages, Hoagg explores who she is within and without relationships.

She does this through a range of analog and vintage synths, and shimmering melodies vaguely recalling early Kate Bush and Eurythmics — all elements work to create a foreboding aura. But Hoagg updates her self-produced retro electronic sound in often surprising ways, and the devil's in the details: In "Softboy," she interpolates TLC's classic Y2K hit "No Scrubs" for a stream of consciousness poem about wanting a man with a backbone. "I don't want no scrub, but I don't want a softboy," which can be interpreted numerous ways.

For the haunted video, directed by Jake Moore and Oliver Rivard, Hoagg hunts down the softboy who ghosts her to find closure, literally. The theme of love without resolution is a theme throughout Vanta Black, which Hoagg describes as an album made during her darkest hour. The song "Caracal," which channels elements of underground witch house, finds Hoagg attempting to give herself the closure she seeks. "I'll see you around," she sighs into the ether.

These communication breakdowns are often exacerbated by modern technology. Who doesn't have or hasn't had a semi-toxic relationship to social media? PAPER slid into Hoagg's DMs to connect, and it turns out she's just as candid online as she is in her music.

@michaelxomichael: So I described this album to myself as "a black cloud that never quite lifts," like a spooky dream. This to me is a good thing. I'm curious about how you approached setting the mood for the record.

@rare_dm_: I like that! Well, first off, I am always attracted to darker and more dissonant sounds, and I use analog gear that often has a lot of quirks, sometimes dusty sounding synths. So that definitely adds to the darker sound. As far as how I write my melodies and the content of the songs, it is a moody record because all of the songs come from really dark times for me. Some of them are fully stream of consciousness lyrics I never changed. "Softboy" was one take, so was "Best," for example. I was wildly miserable haha.

Omg I get that. On "Softboy" you said you didn't want a scrub but you also didn't want a softboy, which was interesting. I was like, well, what does Erin want?

Unconditional love for eternity with someone I love back lolllll. All of the songs on the album are honest and written from real experiences though. I like writing from imagined realities and characters, but this album didn't end up with much of that. Besides the fact that "Jade" was a lot of what I was imagining someone was doing without me haha.

Yes, you're really specific actually for an album that lives in the shadows. Like on "Spell Cast," you sing about being real and not someone's projected idea of you within a relationship.

And their projected idea of other people from the past!! Getting compared to someone that a partner was with before you is not a good place to be. They broke up for a reason yet they haunt your s/o.

No, that's so frustrating. It's like being seen more as a mirage or a hologram than the real u. So with you being miserable during writing these songs, it seems like you really trusted yourself to open up about those experiences. You're not holding back.

It's a cathartic experience and venting within your own songwriting can better make you understand a situation and what you need to do better, and move forward. My heart is on my sleeve, always, and especially within my songwriting.

Me too! I'm a cancer and can't help but feel everything. What are you?

I can tell! Happy almost birthday. Softboy is a cancer, he was very guarded. "Spell Cast," "Best," and "Jade" are also about him lol.

Wait, what are the signs of the other songs? Or even like five of your faves.

Omg fun!! OK, "Darkeyes" was another, different Cancer. And "Night Watch" and "Think Quiet," that's 4/20 birthday, so a Pisces? "Almost a Year," I'll have to try and figure that out.

I love "Wholehearted," [especially the lyric] "I gotta find a new way to dance.

Aw thank you!! So much longing in that song. I was so in love, in a way that's one of the only hopeful songs on there lol. Hopeful in a very sad way. OK! Capricorn for the "Almost a Year" guy. I figured it out, there was a birthday invite on a Facebook message lol. So funny.

Are you still online friends with your exes?

The ex that "Night Watch" and "Caracal" are about (he was a heroin addict) didn't ever have any social media. The "Dark Eyes" and "Almost a Year" people, yes, still online friends, neither ended up being relationships. Not even full hook ups tbh. The "Softboy" guy, we were until recently. We broke up and then we got back together and were amazing for a year and a half (he went to my family reunion with me in Michigan for a week and met like 40 people), and then he got a temp job in Amsterdam and then broke my heart again. Now we are not talking. This is after Vanta Black. During the second time we were together, he would go to my shows and be embarrassed during certain songs haha.

Some of this is still fresh for you but I guess that's because life goes on... but sometimes even when you need a break from a person or situation, something else happens. Like pop-ups online, but in real life.

Yessss!! That's exactly what "Softboy" is about actually. Not being able to avoid the person you are sad about/trying to get over because you "run into" them online.

I love the mix of dark wave vintage synths and relationships with and without technology.

Thank you!!! The synth of "Wholeheart" (human sounding pad synth) and "Night Watch" (the vibraphone sounding synth) is a Casio CZ 5000 I found on the street in Soho. That was my first real synth in NYC.

Amazing. I have a couple more q's... Does sorcery play a role in your work?

Interesting question!!!! I love fantasy books and magic. I am very influenced by books like His Dark Materials and the Abhorsen series. I can't say that I am "casting spells" with my songs necessarily but maybe I am. So I would say... maybe... I do use music to escape reality, and I really love books with alternate realities and different worlds.

What does Vanta Black mean to you?

It is my darkest hour, I haven't experienced that kind of heartbreak before. I can thank Anish Kapoor for the title. It was also a very magical accidental cover that made everything make sense. The one [photographer] Lissy [Elle Laricchia] took, it was just such a mood. It all came together then. She's my oldest friend in NYC and I met her looking for an apartment in 2013. We never ended up living together, but have both stayed at each other's places when between apartments. She's one of my best and closest friends and has done all of my album art.

What helps you stay light?

Creating things, whether music or visual art, biking, swimming, dancing, talks with friends. Treating myself well by finding time to let myself find calm. Tea with a face mask and candles. Eating lots of fruit and vegetables. Listening to music and seeing art. I came to NYC for fashion design school at FIT originally, and then dropped out after my associate's degree to pursue music. My first instruments since I was 11 are fashion and percussion, so both are very important to me. Thought I should tell you that, too.

For more on Rare DM, follow her @rare_dm and visit here. Catch Rare DM live at one of her upcoming shows, below.

Proper Gnar Is Proving That Black Girls Skate, Too