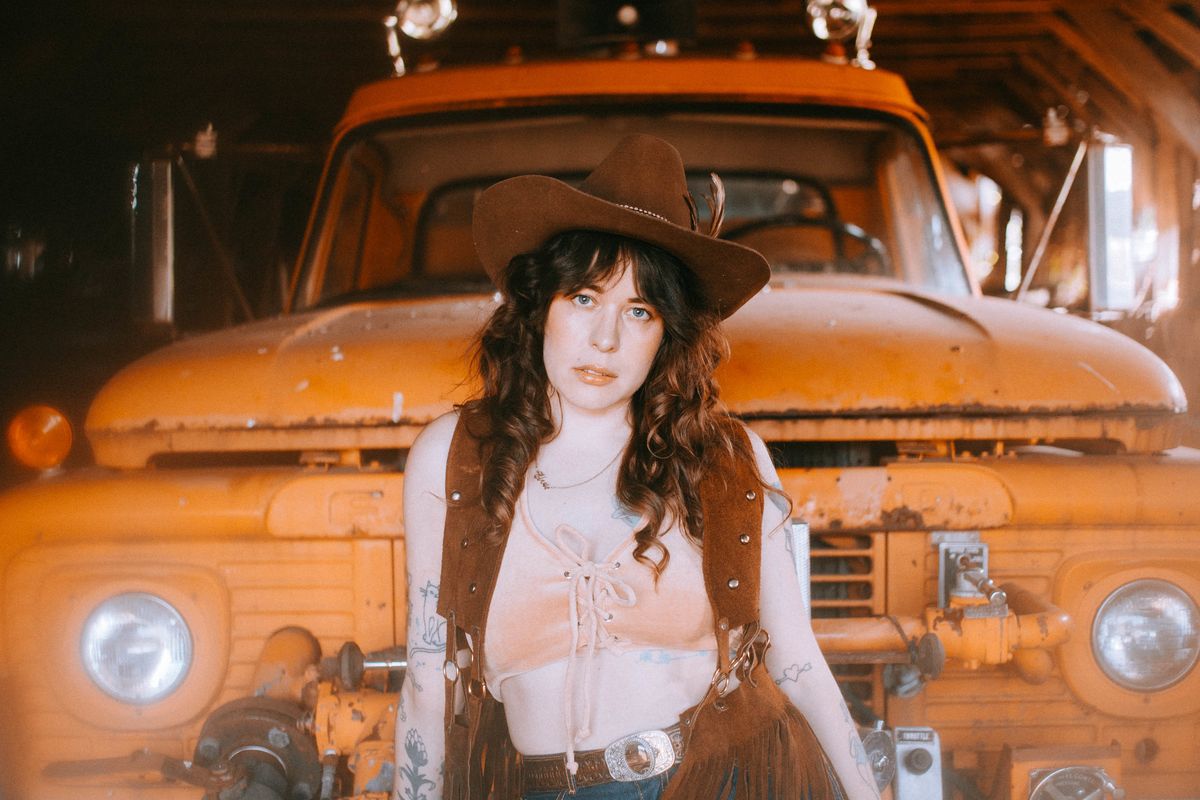 How many of those orders included the "Lesberado" shirt? Mine did. Based on one of Larson's prints, the phrase exists above a sun setting between a lying woman's legs whose hair is a pathway to (presumably) queer cowgirls arriving on horseback. It's a beautiful, dreamy kind of honky tonk lesbianception.

Larson categorizes her work, which has earned her nearly 40K Instagram followers, as "Howdy Homo." Digitally rendered babes kick up their boots in desert scenes, ride horses in wide-brimmed hats and sport shag haircuts with fringe-trimmed Western tops. Most of her art comes with a message: Support sex workers, Black Trans Lives Matter, ACAB. One piece serves to encourage the continuation of social justice movements: "It ain't over, keep going." Another reads, "Set Fire to the System." The captions of her posts elaborate and educate.

Having grown a sustainable business through selling individual prints and dabbling in custom paintings, tattoos and other illustrative work, Larson has just made the next big jump: she left her day job in marketing to focus on art full time.

Her departure also had a little something to do with contracting COVID-19 in June. "It was six weeks until I got out of bed for considerable amounts of time," Larson says. Traveling any distance became an arduous journey: "I would have a pillow in the bathroom so I could lay down, use the inhaler, and rest before I could walk back to the bedroom."

Maybe it was the frightening and sudden physical downturn that moved her to quit. But the tokenization at work had also become tiresome long ago.

"You become the point person for people to ask questions so that people will buy the product, and you're just like, what is this?" she says. "I don't want to do this anymore."

Consultants who work in positions like Lynn's previous role are like a go-to sounding board for checking — most predominantly — the privilege of cishet white men as it appears in the marketing of the products they sell. There is merit in that, absolutely: consider what offensive material might pass through if not for the sieve of socially conscious employees.

Still, if these companies aren't donating profits in support of social justice, and if they're not internally diverse (for one: how many higher-ups are Black or POC?), the influence of a marginalized person is quite limited. They're basically charged with helping the company avoid bad press.

Cushioned by the hard work she'd put in already, Larson says, "I decided to make the jump and stop working for white men that were determined to do the wrong thing every chance they had."

Why Howdy Homo, though? While Lynn's work aligns with the recent Yeehaw Agenda, her embrace of the style is rooted in her upbringing, which was rife with a varied music education, thanks to her mother. Given the rundown of classic country's femme icons as a kid, Larson remains especially fond of Tammy Wynette, Patsy Cline, and Loretta Lynn. She dipped into '90s pop country too — in real time — and, as an adult has reacquainted herself with the often corny-but-awesome likes of Reba McIntire, Alan Jackson and Garth Brooks.

"It's probably in the last four years that I really embraced that history and that part of my youth and my interests," she says. "I've always liked this aspect of myself, but felt like there was never room for me in the country scene because it was so white."

Like so many people who exist as othered identities, Lynn is reclaiming something she loves that, in its mainstream form, doesn't necessarily love her back. While she identifies as a white Latina, we understand that country as an industry has historically shut out the voices of marginalized folks, like non-Anglo ethnicities and LGBTQIA+ folks. Especially sidelined since the start, and still today, are Black people — the originators of blues, which gave roots to country music. Did you know the banjo came to the U.S. by way of West African slaves? Because it did. Do you know who Hank Williams is but not Charley Pride? That's a problem.

"[It's] seeing the Black community be unapologetic, like, 'You took this from us, and we're taking it back, and we're doing it better than you ever have, because you're unseasoned,'" she says.

Other country singers were altogether obscured from the history of country music because they lacked the Anglo credentials. Most country fans, save some diehards, haven't heard of Texas-born Johnny Rodriguez, for example. Early on in his career he was asked to change his last name to Rodgers, and he declined. He went on to amass 15 Top 10 hits, some of them in Spanish, making him the first Mexican-American to be a major country music star.

The white fencing around country music is coming down. Its chipping away has been gradual, with big pushes at the advent of the internet and, most recently, thanks to Lil Nas X and Megan Thee Stallion and Lil Nas X. (Queer country is getting its due, too: the first-ever gay country artist, Patrick Haggerty, is now much better known than when his band Lavender Country debuted in the early '70s.)

But Lynn says we shouldn't forget that, while nobody should be disallowed from loving country music or its aesthetics, the harsh realities of rural life shouldn't be discounted by city folks.

"Obviously I want to promote that this is for everyone: this is for homos, this is for Latinas, this is for literally anyone who wants to come out and show up and likes the music and wants to put on a hat and have a good fucking time," she says. "But it does worry me when it starts to be thought of as kind of a trend."

Cowboy boots have been upgraded to platform-style heights, Western shirts and dresses embellished and modernized, wide-brimmed hats offered in shades of neon or zebra or leopard print — all this stuff is sold in shops and online alongside every other trending style, and yes, it's all very, very cute. Larson is here for it. But she's also concerned that big-city embrace of country culture could obscure the needs of rural-based queer, trans, and Black and POC folks.

"They still get shit on," she says. "And people who are still in poverty but who really have this in their hearts. It's hard wanting to represent this community but also not wanting to be the only voice, and people being like, 'Well, this is what country is now.' But country is still people in the country, living with adversity, living with racism, living with intolerance, that are still doing the best that they can."

Jokingly, Larson calls herself "just one idiot." But she's doing her part, putting her sizable platform to extra good, political use. She even engages with the close-minded contrarians and conservatives when necessary.

"There were a lot of people that were angry that I was talking [on Instagram] about the USPS and what's happening with them being defunded to defraud the election," she says. "I was showing solidarity and support, and some people swarmed that post and were like, 'Well, I 'm not having my tax dollars go there.'"

She then explained that the USPS isn't funded by tax dollars. "It's like trying to correct misinformation," Larson says. Putting out the truth at least creates the opportunity to learn, even if some people are too stubborn to accept it.

After all, she says, "What's the point of sitting in your house and being like, 'I'm a good person,' if you're not going to accept the challenge of shutting someone down who's harmful?"

There are some folks she won't engage with, though. Not long after the drop, as she expressed how overjoyed she was with its success, she adds, "I did have a few annoying people asking why I'm not making things for hets. I just ignored their DMs."