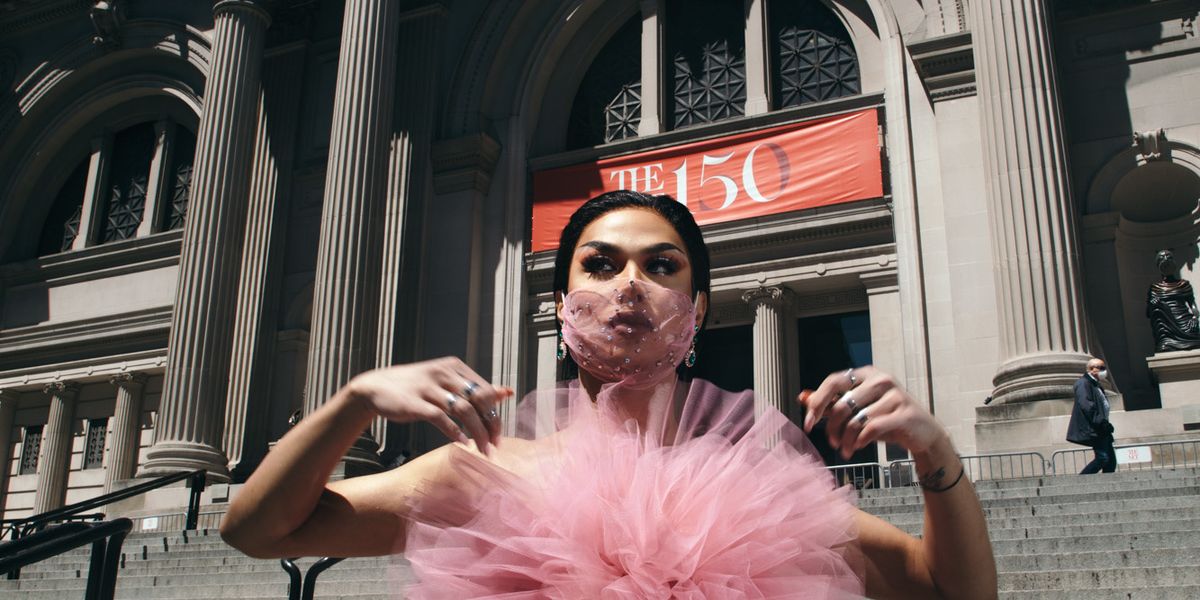 Behind the Scenes at the QuarantQueen Met Gala

The Met Gala has given us some of fashion's biggest ever moments. The first Monday in May 1974, Cher turns heads arriving at the Met Gala wearing one of her date Bob Mackie's designs: a sheer, beaded gown complete white feathered sleeves and a white feathered skirt that began around the knee. The first Monday in May 1996, a newly-divorced Princess Diana arrives at the Met Gala in a navy lace and satin dress with black lace trim from designer John Galliano, who had just begun his tenure at Dior. The first Monday in May 2004, Amber Valletta stun(t)s in a Marie Antoinette-inspired Maggie Norris Couture corset and John Galliano skirt, complete with a powdered coif. ("Looking back on it, I think it's so badass that I went for it, because it was at a time when people were just starting to get into the theme," she told W in 2018.) The first Monday in May 2015, Rihanna went viral with a 55-pound gold embroidered, gilded yellow imperial cape designed by Chinese couturier Gui Pei.

The first Monday in May 2020? Crickets. "We are proceeding as planned and look forward to a wonderful evening," a Costume Institute rep told The Cut on March 12. Four days later, on March 16, Anna Wintour announced that the Met Gala had been postponed "indefinitely." The event, which was to be co-chaired by Nicolas Ghesquière of Louis Vuitton, Emma Stone, Lin-Manuel Miranda and Meryl Streep (it would have been her first time attending), joined an ever-growing list of canceled events including the 2020 Tokyo Olympics, the 73rd annual Cannes Film Festival, Burning Man, Frieze New York, Eurovision Song Contest, TED 2020 and more.

Related | Sidney Prawatyotin Is the King of Fashion Instagram

Enter: CT Hedden, a New York City drag performer who was determined to continue a tradition that began last year, when the Met Gala welcomed its first three drag queens to the carpet: RuPaul, Aquaria and Violet Chachki. Coronavirus be damned. "I was doing a safe, social distancing jog on the Friday night before the Met Gala would have taken place, and I thought, 'ya know, I should create something here,'" Hedden says. "It's my duty as an artist to present, even in rough times. We do what we do to send messages through our work, and now more than ever if I can make people smile and more importantly gag, then I'm doing my job." And thus, in that very moment, the idea for CT Hedden's QUARANTQUEEN Met Gala was birthed.

Hedden's love for the Met Gala runs deep, especially considering the symbiotic relationship between fashion and nightlife. "It's always nice to see what designers and artists 'reference' from nightlife and drag culture, because let's face it, they be seeing us," says Hedden, a seasoned performer who was gigging in Chicago and Miami before settling down in New York City a decade ago. ("So wait," she adds, "I guess I am a New Yorker officially.")

The entire concept was thought up, shot and completed within twelve hours. First Hedden telephoned photographer SIDEWALKKILLA, who was immediately on board. They knew they wanted to go about this carefully due to the obvious restrictions and safety concerns. Then came the casting: Jasmine Rice LaBeija, Nikki Exotika, Thee Suburbia, Glow Job and Digna, all of whom began preparations for the shoot without a second thought. Think Zordon pinging the Power Rangers... only drag queens.

"The fact that all of the queens said yes immediately to my inquiry about participation shows how connected our drag community really is deep down," Hedden says. "We are a 'family'-hood. It also shows that across the board even though we all portray different art and aesthetics, that commonly we all love to spread happiness and use our platforms as public figures to educate and empower."

Related | Isaac Mizrahi Has Fallen out of Love With Fashion

On the morning of Saturday, May 2nd, just two days before the Met Gala would have commenced, Hedden and SIDEWALKKILLA met outside Hedden's Upper East Side apartment and walked to the Met "drag in hand, painted and masks on." Upon arrival at those famous stairs, Hedden stripped down, changed and started posing. With a schedule mapped out, all of the girls were scheduled within twenty minute time slots to avoid any large gathering or causing any kind of scene that would have invited gawkers to crowd. One would shoot, they would leave, one would come and repeat.

Were there a lot of gawkers? "Nope, just the occasional hot guy runner saying 'you look gorgeous' which, I mean c'mon, we did. Also I will say there were police stationed outside and they were extremely kind to us, plus they got a fierce free show. Thanks NYPD!"

The result is a series of stunning editorial images and an accompanying video that is both a celebration of the Met Gala's biggest tentpole — the fashions — and a cultural commentary on the times we are living. As is drag's great superpower. "I hate that saying 'we are all in this together,' because we are definitely not," Hedden says. "I wanted people to see that fashion, beauty, and glamour still lives on, and if dressing up in a gown at home in your living room makes you feel better than bitch, do it. Smile, cry, get angry, do all the above. The queer community, though very divided, have a way of always coming together in trying times. We are hustlers, always have been and always will be. I hope that people enjoyed my version of the Gala, and I thank everyone who was involved in making this happen. Now that being said, I hope we get invited next year since we covered their asses this year."