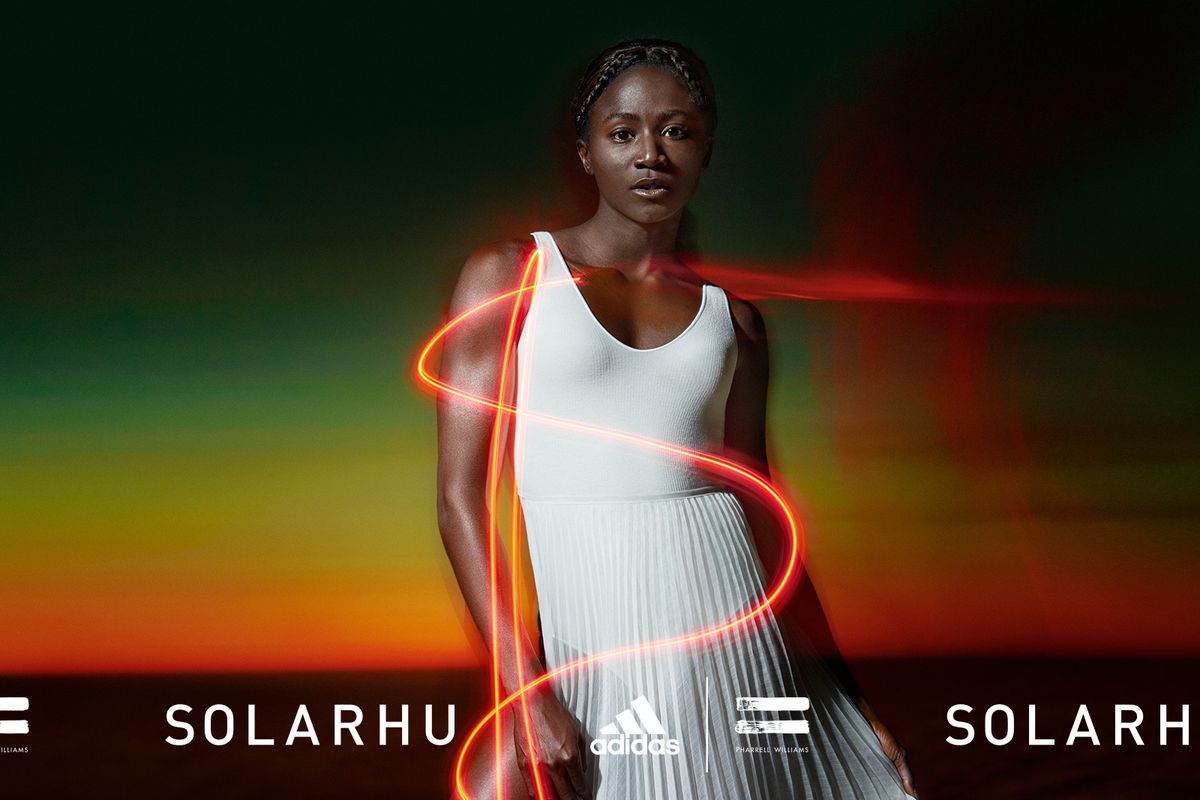 Those familiar with singer-producer-designer Pharrell Williams' past shoe collaborations will likely not recognize his newest creation with adidas. In what he's calling the SolarHu Greyscale pack, Williams is rolling out a four-part footwear collection that is unconfused by wild color-blocking and intentional brightness, but rather heightened by its plainness.

Retailing for $160 each, the four colorways — white, cream, gray, and black — are cool, understated alternatives to the other shoes in the SolarHu family. Rather than allow for the rollout of the new line to be guided by the outward colors and vibrancy of a SolarHu design, the Greyscale pack is driven by an "inner light" that powers us all. In a pivot towards a more inclusive future for the collaboration, there's an emphasis being put on a message of empowerment through our shared differences — a concept that has influenced the Greyscale pack's launch point.

The Greyscale pack is being fronted by Williams, of course, but also by three-time Olympic medalist and track superstar, Tori Bowie. An emphasis is put on Bowie's individual strength for this campaign; an element of self-actualization is present that we sometimes deny ourselves of when recognizing our greatest achievements. The new campaign from adidas is about catching that glimmer of self-love early on and engineering it to last a lifetime, beyond a single obstacle.

PAPER talked with Pharrell Williams about the new collaboration's message, its differences from the other packs, and choosing Bowie to front the campaign. The collaboration hits flagship stores, online and select retailers starting July 20, 2019.

What was the motivation behind moving to a less vibrant color scale for this collection?

It's an evolution of everything we've done before. We've always worked with a range of colors and for this one we wanted to focus on the versatility of the model by keeping the colorways pared back to really shine a spotlight on the silhouette, but the idea of color will always remain at the heart of Hu.

Why was Tori Bowie the perfect spokesperson for this particular release?

Tori is an inspiration to me and to everyone she meets. After facing a few personal setbacks years ago, she persevered and worked her way to winning three Olympic medals and the 2017 100 meter world championship — making her the fastest woman in the world. Her inner strength is the embodiment of everything SolarHu is about.

What has been your favorite part about partnering with adidas for the release of your Hu line since 2014?

Throughout all of my work with [adidas] Originals I've just tried to tell stories that might not otherwise be heard and use this platform to channel positive energy where we can. Adidas and I share the same values and are dedicated to changing lives through sport and just knowing that our work together can impact others is really what it's all about.


This new campaign is about being powered by "inner light" — can you tell me a little more about what that "inner light" looks like, or a time when you had to rely on it?

Inner light is the hope, love, inclusivity, and equality present in all of us — the strength that helped Tori push through her challenges to come out a champion.

How are you bringing the message at the core of your collaboration with adidas — one of "love, hope, inclusivity, and equality" — to the table with this campaign.

It's all Tori. The campaign images themselves visualize the inner light in Tori and all of us, and the video shot by Shane Sigler shows Tori reading her manifesto on human potential, which is very powerful.

Are there any other celebs, stars, or visionaries that you would want to see rock the SolarHu Greyscale pack? Why?

It's a shoe that celebrates humanity. My ambition has always been to be able to design a sneaker that can appeal to everyone based on these principles and when you wear it you feel empowered and proud. That's the ultimate recognition for me.