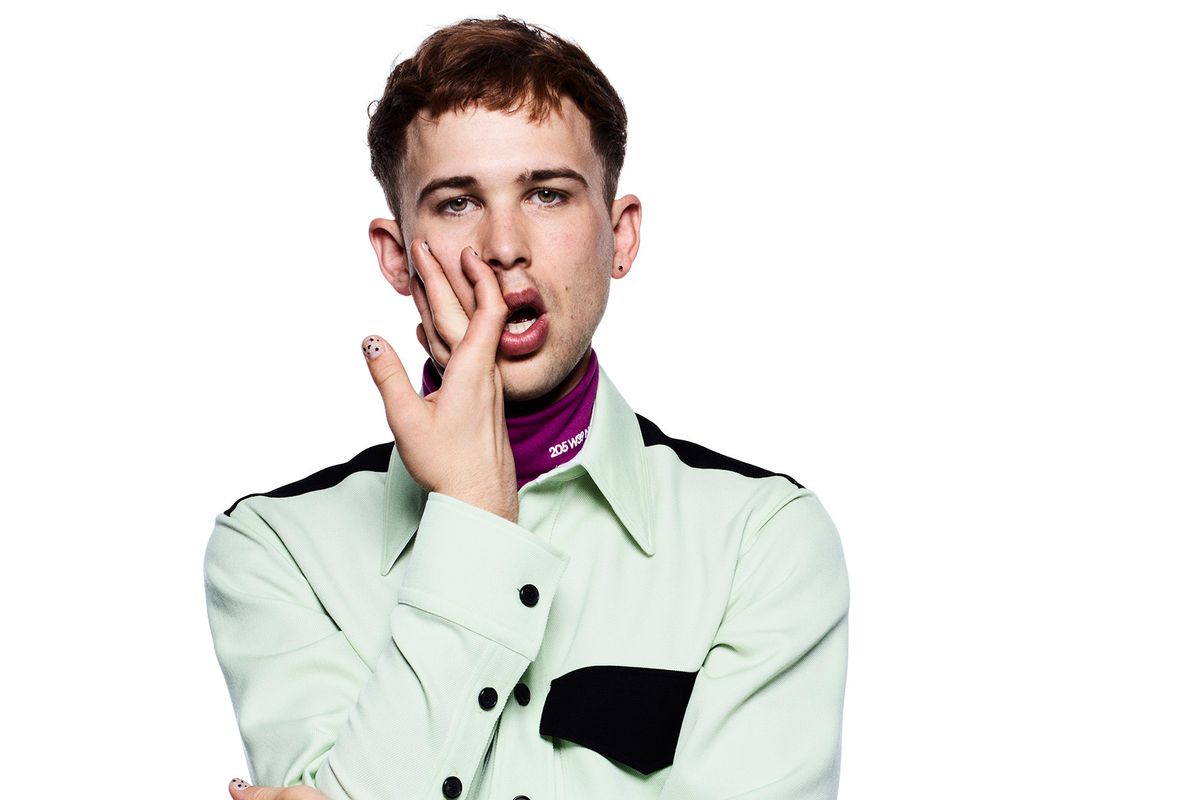 Tommy Dorfman isn't wasting any time. In less than two years, the 26-year-old actor has already spent two seasons portraying openly queer high school student Ryan Shaver in the Netflix series 13 Reasons Why, earned GLAAD's inaugural Rising Star Award and landed a role in Lifetime's upcoming series American Princess. But above all, the self-proclaimed "actorvist" has been able to harness his newfound fame to advocate for causes close to his heart, like LGBTQ rights and gun control. And despite challenges coming from the current administration, Dorfman says he remains energized. "It fuels us to be more proactive and challenge what's coming against us," Dorfman says. "I can't imagine a better time to be doing what I'm doing."

Your character on 13 Reasons Why, Ryan Shaver, has become a fan favorite. What do you think he means to people?

For some people it's the first gay kid in high school that's comfortable with themselves that they've seen sort of represented on screen. You don't see a lot of that — especially on mainstream media. So, I think that's been really important. I think fostering acceptance, either with oneself or with peers, or kids that they go to school with that maybe they didn't understand before. It's interesting to play a character that's so outspoken and so confident and dry and intelligent at such a young age.

And so self-aware and I think that really speaks to this generation of kids. I'm 26, so I'm obviously not in high school. But talking to high schoolers now, they feel so much more complex and inspired and smart. They're so fucking smart. Maybe a lot of that has to do with social media and having those kinds of interactions and learning things from people that aren't just in their community. Their worlds in some ways are smaller because of their cell phones, but also a lot larger. They have access to so much more information.

When I was in middle school, I was in Abercrombie head-to-toe.

Same! Like, I was not cool. I didn't know how to do my makeup or any of that stuff. On one hand it makes me sad I guess, but on the other hand, I think we have a really bright future ahead of us. I lean on the optimistic side of things.

I think you sitting here, being openly queer, openly fluid and a successful actor shows how far we've come.

To be honest, it wasn't a future I was sure I was able to have and I know a lot of people that feel that way. There were not a lot of examples of that before. But there are now and I think there will continue to be. Hopefully.

There's obviously so far to go and I know sometimes it feels like it's regressing with the current administration's policies.

In some ways, I think that fuels us to be more proactive and more honest and open and challenge what's coming against us.

What do you hope to see within the next few years? You're obviously a very strong advocate and voice for the LGBTQ community. Is there anything tangible you're looking to see or a feeling that you're looking to achieve?

You mean, like, aside from an entirely new administration? That's our default I guess. [I'm hoping in the future] the work [in entertainment] that's being created and produced and financed is more truthful to our day-to-day experiences and more diverse and more inclusive so that we no longer have to have categorized LGBTQ films and it becomes more about the medium and less about the characters. Because even still today with a greater presence of LGBTQ people in film and television, more often than not they're tokenized, or it becomes like the selling point of the movie. Which is cool and exciting obviously but at the end of the day I think for me as an actor and a lot of people that I know that fall under that umbrella — we just want to work and not have it just be about how we identify on the gender spectrum or who we have sex with or who we're married to — any of that. And play characters that are perhaps truthful to, or close to, our own experience but also characters that are different from us. That's definitely what I hope for.

These kids are all queer so I feel like it's going to be a really exciting future in our industry of just creating content that's just a melting pot.

What would you say to those people who say celebrities should stay in their place and not give their opinions?
I was listening to the radio and this crazy guy was like, "Celebrities are part of the liberal agenda and they're unintelligent and they're stupid and the whole purpose of actors is to read words that were written for them and they're not creative and Mark Ruffalo, Leonardo DiCaprio, they're so hypocritical, they don't have their own thoughts. They're just like robots." Which to me is completely insane. Art has always and forever been a reflection of the time and what's going on. Actors, at least in my experience, are huge collaborators in that process. We create the characters that we play, which then influences the writers who write… What scares people the most is that we have large platforms and we can sway votes and create policy changes.

What are some of policy areas you're most focused on right now?

"Actorvism" is an interesting place to be. I've made it a point to educate myself on what's going on around me and advocate for things that I believe in. There are certain things that are just black and white [to me], like gun reform. Or what's going on right now with immigration and the [aftermath of the] forced separation of families is also a black and white issue to me. With this #MeToo movement, after talking to people who have been in the entertainment industry for decades, it sort of feels like they're on the precipice of something and it's so exciting because finally people who have been advocating for change since the beginning of their careers and not getting attention for it finally have a larger voice and a larger collective group to speak to.

I can't imagine a better time to be doing what I'm doing because people are so passionate about the work they're creating and also about our own personal agendas as far as what we feel is right and wrong in human rights as a whole. For me, in using my voice for LGBTQ people, the most important thing I've learned is I have to educate myself on all facets of that. Or provide space for other people who are more educated and support other people who have a better understanding and learn from that. As a white, cis-passing dude — even though I don't necessarily identify with that — I have a lot of privilege. My focus is [supporting] the trans people of color in this industry — how can I use what I have to support them and continue dialogs with them?

13 Reasons Why has obviously tackled some pretty serious topics like suicide and rape, which has led to criticism in the media and from outraged parents online. What would you say to these critics?

With any piece of art, there should be a dialog. To expect that everyone is going to respond positively to something you make or something you're a part of is just unrealistic. I recently posted a picture with [Parkland alum and activist] Emma Gonzalez, someone who I admire greatly, and the comments were crazy. They were like: "She retweeted stuff that was against your show" and "she didn't support your show and she bullied the kid." Or "She's the reason why." She's fully entitled to her opinion of the show I'm on. And, in some cases, she might be right about some of those points and that's ok.

With season one, I think we didn't provide enough resources, we didn't warn people ahead of time [about the sensitive subject matter]. We didn't have the right trigger warnings. So for season two, I think they did a good job with being more up-front about content that you might see on the show.

Even for people who are offended, it's hard to argue with the fact that the show spotlights subjects that are not often talked about or portrayed on TV but that do happen to people every day.

It all happens. My high school experience was nutty. We were doing all of those things. There were kids attempting suicide as well as actual suicide. There was crazy drug use, which you don't even see in this show a whole lot. In my personal experience, I [experienced] sexual assault as did many of my friends. Intoxicated, not intoxicated. We had robberies at my school. We had all kinds of crazy, chaotic stuff that no one would ever want to talk about, that no one told their parents about. I like to think that our show shines a light on some of these experiences. I know that it's made it easier for some people to start conversations about that and relate to each other and get the help that they need.