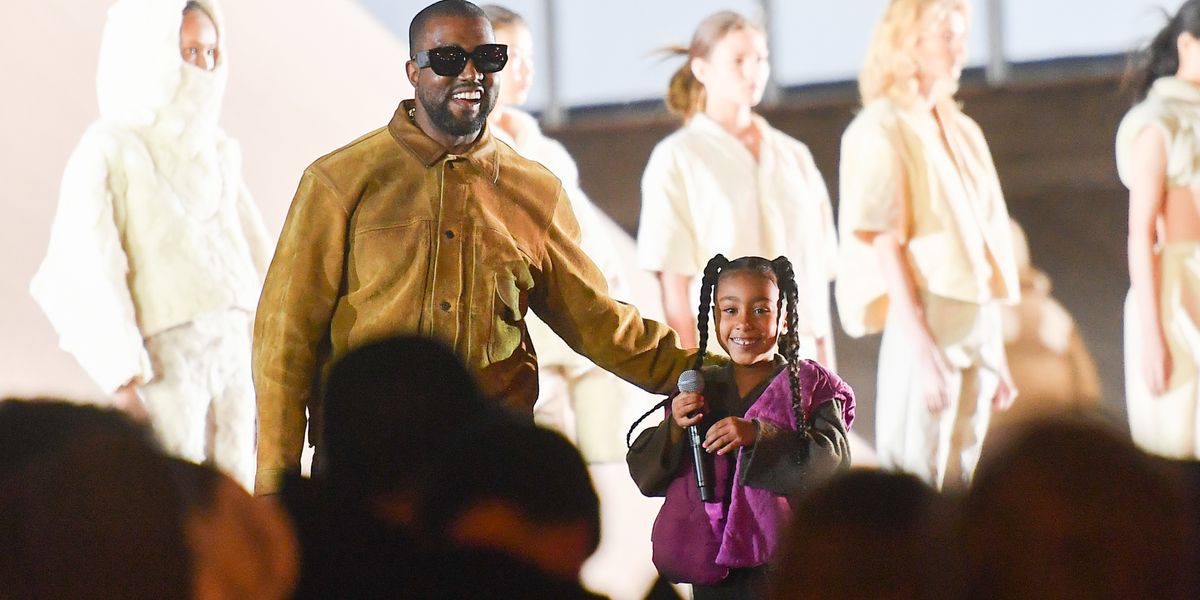 It's become a fashion week expectation that Kanye West's YEEZY presentations are multi-medium, press-frenzied spectacles. In 2016, Ye debuted his long-awaited album The Life of Pablo alongside his Season 3 collection at Madison Square Garden, and for Season 4 he pulled off a massive sunbathed show on Roosevelt Island that had some models fainting on the runway. This year's show was no different in terms of scale and buzz — for Paris Fashion Week, Ye had his daughter North West rap an original verse over viral fashion icon ZaZa's "What I Do?" song from last summer.

"What are those!" North yells into the microphone every few bars, a reference to the golden age sneakerhead culture meme. The verses may not be on par just yet with her father's carefully crafted rhymes and clapbacks, but she's getting quite the early start with a great mentor by her side. Kanye didn't create the beat, however, and is actually facing some backlash on social media for having North rap over ZaZa's track with no credit to the fellow child celebrity. In an Instagram post made on behalf of ZaZa, media outlets are being asked to show love and credit her for inspiring the Season 8 performance.

As for the garments on the runway, it's safe to say that North upstaged the collection. Twitter's aflame with influencers and fashion editors praising the 6-year-old's performance, but there aren't many tweets about the Season 8 clothes themselves. Videos taken live from the collection's debut show wintry white puffers and snow boots, harkening back to the militaristic structuring from his Season 2 showcase, but as if it was now being shown in Arendelle. Think, "Elsa goes to SoHo."

The West family hasn't made any indication that North will be putting out the cover of ZaZa's "What I Do?" as an official single, or starting her own music career, but she's already got the built-in buzz. Why not at least give her a feature credit on the next album, Ye?