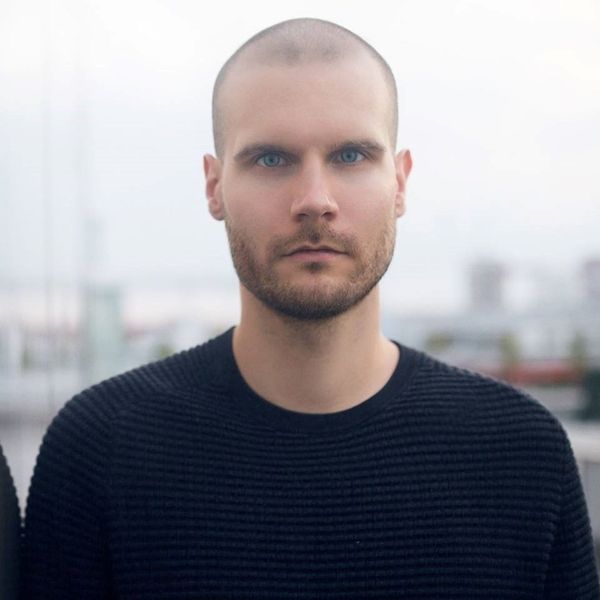 The news that MySpace had lost over 50 million songs last month in a botched server transfer was a veritable Burning of the Library at Alexandria for a digital era — a virtual archive spanning 12 years now lost to the wind. It's an unexpected tragedy that can't help but make us wistful for the days before algorithmically generated playlists hand-delivered new music right to your earbuds. Like our ancestors before us, who dug through dusty crate after crate of vinyl, there too once was a time where you had to scour page after page, dodging malware and pop-ups, to find fresh auditory blood. From this a new mp3-based ecosystem emerged, complete with its own set of aesthetics and a Wild West-like landscape of blogs vying to be the next tastemaker.

French producer Nicolas Petitfrère, better known as Nömak, feels particularly nostalgic for this era. Having rose to prominence as a part of the French future-bass quartet, Point Point, it may seem odd that the now PC Music-signed artist, who has written for the likes of Charli XCX, and built his reputation as a cutting-edge future-facing electronic artist would want to look to the past for inspiration. However, through cleaning out his hard drive, Petitfrère rediscovered his DNA as an artist.

Nomak's new mixtape, _128 kbit / s_My_Love, is essentially the artist's love letter to that era. Culled together from rediscovered demos, Petitfrère reinterprets the "lo-fi" sound for a generation raised on the internet by swapping out vintage synthesizers in favor of low quality file formats and trading in the warm hum of vinyl for digital artifacts. This subtle touch is something only keen-eared audiophiles would likely catch, but it's that exact attention to authenticity that ultimately brings the record together.

The mixtape's centerpiece, "_--___-TRAFFIC JAM-___--_-," is perhaps the perfect microcosm for what Nömak looks to sonically achieve. A glitchy Four Tet-style techno roller, the track's metallic murmured vocals seem to stretch out ad infinitum until you're lost in its weird hypnotic loop. This exact blend of organic sounds wrapped in a thick coat of artificiality ends up being a poignant metaphor for the underlying humanity at the heart of our digital existences.

PAPER caught up with Nömak to talk about the downfall of MySpace, the importance of blog house, and what the future holds for him ahead of the premiere of his new music video for "-_--__-TRAFFIC JAM-__--_-."

What initially drew you to the era of mp3 blogs as the aesthetic lynchpin for the project?

At the end of the 2000, I Ieft my hometown and moved to Paris. I didn't really have a lot to show for myself except for an art degree, no money, and a lot of enthusiasm. Moving to a big city had a pretty big effect on me because it was really the first time in my life I saw what music culture was in person or even what the music industry looked like. At that time, everything was really "Paris-centric" in France, I mean there was a scene in Lyon and a couple other cities but Paris was the only place that would make artists breakout outside of France. "Internet as a career launcher" wasn't really a thing yet, everybody was mostly talking about music on blogs, MySpace, and music forums. For me, MySpace was pretty much the big thing when it was time to dig for some new tunes, so literally everything that you would stream at that time would be very poorly compressed music with very harsh high frequencies, rumbly basses, uneven gain reduction due to the poor internet connection. It's funny how that affected the way people not only consumed music but also created music; very mid-range, with growling distorted basses, very brutal sample cuts and over-compressed drums. Modern songs that use 808 drums would be quite unpleasant to listen to in those conditions. So, using that aesthetic felt kinda logical to me.

How did that end up translating over into the production for the mixtape?

In the past, a lot of underground movements have used analog gear/samples to give a low-fi effect to their sound, from early hip hop or filtered french house from the '90s to more recently in indie rock. We're deeply attracted to the sound of analog devices simply because we all grew up with songs that were using that technology. It's comforting and familiar, when I play a Bibio song, I know that it hasn't been produced in the '70s but the sonic aspects are tricking my brain into believing it, and it makes me to feel nostalgic about a song that I just found out about a minute ago. That is crazy when you think about it.

"Nostalgia is a really powerful tool cause it creates instant emotional connection between you and the piece you're listening to."

I questioned myself about what would be the future of low-fi? Degrading the sound in a similar way that tape distortion was degrading the quality of the songs back in the day. It became quite obvious to me that I had to use the digital artifacts introduced via early samplers and shitty internet, reducing the bandwidth of my sounds introducing glitches and encoding errors. The next fun thing to think about then, is future nostalgia right? Something with auto-tune on, or a song fully clipped with a extremely reduced dynamic range will probably feel nostalgic in the future.

What blogs did you frequent? What rare mp3s do you still hold on to?

I do miss http://boardsofelectronica.blogspot.com and http://rcrdlbl.com a lot to this day, but mostly I simply moved on from blogs cause shortly after the 2010s they became quite irrelevant, as streaming became more normal and artists were directly able to upload and manage their own music. I still hold on to most of the mp3's I've been sent from back in the day. Some songs or even loops from artists that will never get released. It's funny to think that some of them became world famous and I still have their demos somewhere, lost in my hard-drive.

How important would you say blog house was for Paris?

It was important, good blogs were the trustworthy source. Any post would build a hype around artists, it would even sometimes help define a genre (blog house, french touch 2.0) It also helped with the rise of many indie labels such as Institubes, Kitsune and even Ed Banger.

The first wave of french touch originated from the clubs, but the second one (2007/2008) definitely emerged from the blogs/MySpace culture. A lot of my DJ friends were living on minimum wage and couldn't really afford to buy all the music they wanted to play in their sets so everybody would just gets mp3s and trade. It's really common now to discover an artist you like and to find out he's playing in your city in a couple of weeks, but in 2008/2009 it was something never seen before. Sometimes a couple of really big DJs would play in Paris the same night, and you would have to decide which one was worthy of your night! Thinking about it now, we were super spoiled. I feel like the blog culture never really ended, but shifted, people still need "references" in music, nobody can possibly listen to all the good stuff released every day, any kid with a laptop or sometimes even a phone can end up on a top selling record.

What were your thoughts on the recent news that MySpace had lost 12 year's worth of music?

Devastated at first, cause lots of songs I posted back then are now lost on the internet. My old PC hard drive crashed and MySpace had the only remaining traces of my old work, but fortunately, a big part of my work is now in different places so, hopefully, I don't have to face that ever again.

Shifting focus, how did _128 kbit / s_My_Love all come together?

I used cloud systems for years and I tend to work on a lot of things, so when I'm done with a project or a demo I just un-sync it from my computer and it stays in the cloud, sometimes for years. I remember one day looking for a specific track that I made, not remembering the name of it and scrolling through all my folders and then finally finding it in the middle of a hundred unfinished ideas. It was a little bit like discovering a hidden treasure that your past self buried. Afterwards, I spent a couple of months transforming them from demos to finalized songs

You play a lot with voice and found sound, what draws you to that?

I think that's a common thing in a lot of genres I'm influenced by, especially on this tape. From UK garage, House to post-Dubstep or even footwork the use of vocal chops is a very big thing. I think it can easily humanize something that would sound pretty cold and mechanical otherwise. Vocals are a fascinating thing, we evolved to be sensitive to the human voice range (2/5khz ) so when a vocal pops up in the middle of a track, it's instantly attention grabbing just like a baby crying on a plane.

What was the idea behind the video? It reminds me of the video for the Chemical Brothers' "Star Guitar" in a way, not an overt reference but it does really match the aesthetic of that era…

The whole mixtape was a really spontaneous idea, I didn't overthink it, I just wanted the video process to be the same. I really wanted to capture a certain mood, something that was really connected to Paris and the night life, so we just drove through the 9th and 18th districts of Paris and shot everything in one hour.It really had to be captured in a small time frame and edited on the fly to match with the mood of "-_--__-TRAFFIC JAM-__--_-." Something too elaborate would have completely missed the point.

A lot, I'm going to keep using and releasing under both profiles Nömak and Ö. I work a lot more with the human voice in my project Ö but I didn't want to use my voice much for _128 kbit / s_My_Love, I want these two entities to be very distinct from each other; Nömak being more "electronic" in a traditional sense.

I basically spent 2018 silent and worked on a lot of stuff. A.G Cook and I worked on some things together in 2018. I have an EP and an album in the making in collaboration with an artist and friend of mine. Plus I'm working on a lot of different collaborations within different projects at the moment. This is the first time in my life where I have had the time, and opportunity, to mature my sound. I'm planning to release more music and more frequently in 2019/2020.