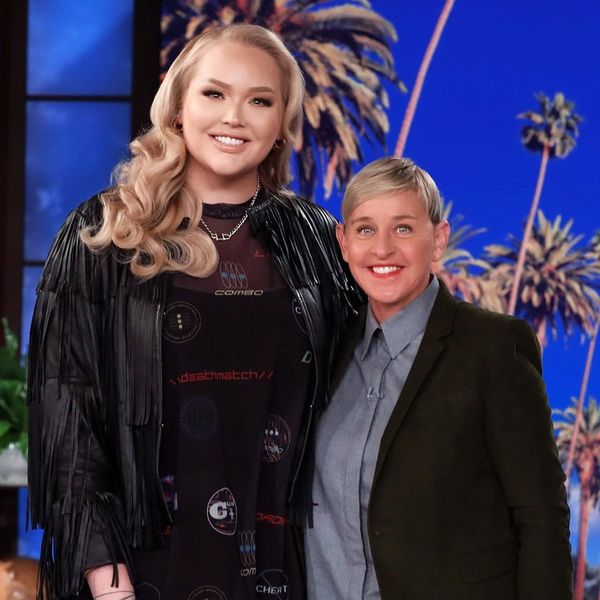 It's been one week since YouTube beauty guru Nikkie de Jager, aka NikkieTutorials, courageously came out as trans to her 12.4 million subscribers in an emotional video.

In her first on-air interview since the video was uploaded, the Dutch makeup artist visited Ellen Degeneres' talk show to share her stories of coming out and her experience of growing up as a trans woman.

On Ellen, de Jager reveals the blackmail message that prompted her to post a coming out video. "A couple of weeks ago I got emails from a certain person and he was not okay with the fact that I was 'lying' and wanted to expose that," de Jager said. She added that the blackmailer had a "pressuring" tone of voice and threatened to tell the public about her identity.

"He was like, 'if we don't get an answer by tomorrow, it's out,'" de Jager said. "I feel like his entire goal with this was to destroy my life, but [the] plot twist [is] that didn't happen."

Among the beauty influencer's supporters is her fiancé Dylan, who de Jager said was at her side as she uploaded the video. She also shared about her mother's unwavering support while she grew up transitioning.

Related | Why Is Too Faced Cosmetics Being Called Out Online?

"My mom is a queen, MamaTutorials is a queen. Even when we went to the hospital to see what was going on, doctors were like 'don't push it too far, let's see where it goes,' but then I came home and I was like, 'Mom, I really want to wear girl clothes' and she was like, 'if you want to wear girl clothes, you're going to wear them," de Jager explained.

When asked if she still would have come out if not for the blackmailer, de Jager said that there's "no right timing" to share her truth.

"I always wanted to come out with it, but it is such a delicate thing," she said. "How do you find the right timing? There's never perfect timing, so in a way, I'm not thankful to the person that did this, but I am thankful that it happened now, and now I get to be free."

As a white, cis-passing trans woman, de Jager acknowledged that she has privilege other LGBTQ people do not benefit from.

"I started when I was really young," de Jager said. "I pass, I am blonde, I look cis. I want to take this opportunity to hopefully inspire a lot of transgender people out there, and even when you're starting later on in your journey, that we need to accept that."

In addition to hosting de Jager, the Ellen show and Shutterfly made a $10,000 donation in de Jager's name to The Trevor Project, a non-profit organization that supports suicide prevention for LGBTQ youth.