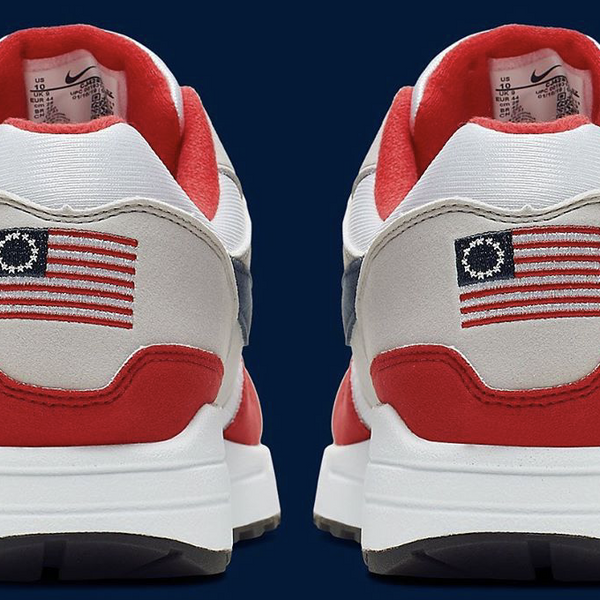 Earlier today, Nike spokesperson Sandra Carreon-John issued a statement saying that the brand had decided to "halt distribution ... based on concerns that it could unintentionally offend and detract from the nation's patriotic holiday."

But according to The New York Times, a source says that the cancellation reportedly came after Nike brand ambassador and former NFL quarterback Colin Kaepernick — who began kneeling during "The Star-Spangled Banner" to protest racial inequity and police brutality — privately reached out to the brand to criticize the use of Ross' design.

The source also said that Kaepernick "expressed the concern to the company that the Betsy Ross flag had been co-opted by groups espousing racist ideologies," as the 13-star flag has more recently been used on Ku Klux Klan recruiting material and has appeared at neo-Nazi rallies, per Today.

Updated 7/2/19: After Colin Kaepernick’s intervention, Nike has officially cancelled the release of this shoe. - Celebrate the upcoming #IndependenceDay holiday with these Air Max 1s featuring the flag sewn by Betsy Ross. For a closer look at this upcoming release, tap the link in our bio.

"Historically, these symbols have been used by white supremacists, both to hearken back to a time when black people were enslaved, while also painting themselves as the inheritors of the 'true' American tradition," Southern Poverty Law Center Interim Research Director Keegan Hankes explained to Today. "More recently, white nationalist groups such as Patriot Front and the American Identity Movement (formerly Identity Evropa) have branded themselves in the trappings of Americana with the aim of creating a more marketable image."

That said, the abrupt cancellation of the sneaker has led to ample conservative criticism, including from Texas Senator Ted Cruz and Arizona Governor Doug Ducey, the latter of whom has said he will no longer support the building of a proposed Nike facility in Goodyear, Arizona.

Arizona’s economy is doing just fine without Nike. We don’t need to suck up to companies that consciously denigrate our nation’s history. 8/

It’s a good thing @Nike only wants to sell sneakers to people who hate the American flag.... @NFL #HappyFourth https://t.co/G6w8vDjvLP

Kaepernick has yet to publicly comment on Nike's decision.