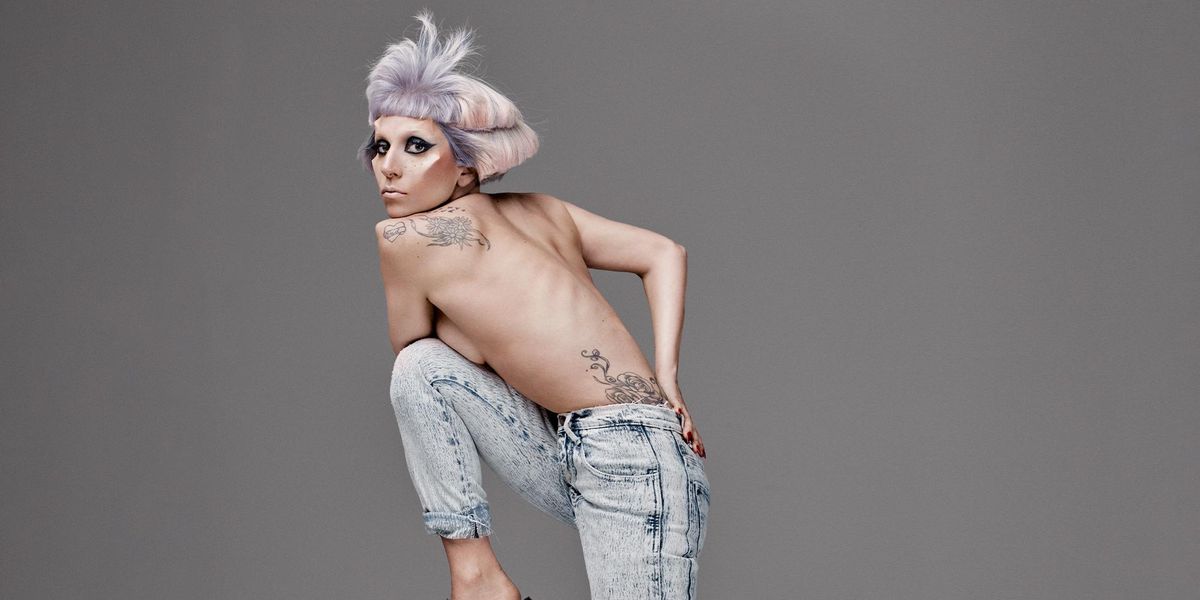 It started with the meat dress, as these things tend to do.

On September 12, 2010, Lady Gaga's flesh-inspired VMAs look by Franc Fernandez marked a turning point in the pop star's already outlandish image. That night, when she accepted her award for Video of the Year, she also announced the title of her second studio album and sang an excerpt from its title track. And thus, her Born This Way era — and by extension, the BTW wardrobe — officially began.

Whereas Gaga's The Fame chapter saw her experiment with looks that doubled as social commentary on the price of fame and celebrity worship (perhaps best exemplified by her brilliant, blood-soaked "Paparazzi" performance), her fashion choices for BTW — she played with everything from prosthetics and blunt bangs to BDSM-esque leather and denim — were all about liberation and self-empowerment as translated through the album's themes of religion, sexuality and feminism.

The meat dress, then, could be seen as the visual culmination of Gaga's previous chapter and the start of something new. A few months later, she officially released the Born This Way single two days before the 2011 Grammys, where she arrived in an egg-shaped "vessel" and latex look by Hussein Chalayan that represented her "incubation" status. It's where she debuted her first full performance of the song, which her longtime collaborator and stylist Nicola Formichetti called a "religious experience."

"At that time, there were a lot of things going on with regards to LGBTQ rights and female empowerment and all those things, and this album was really a starting point of taking back the ownership of our rights," Formichetti tells PAPER. "We wanted something very powerful — something strong and heroic and fearless, but with a Gaga twist. We wanted to do something that was about reality, but also fantasy at the same time. It was about creating looks that made a statement about living with no prejudice or judgment."

Lady Gaga performing "Born This Way" for the first time at the 2011 Grammys. (Photo via Getty)

The BTW era also happened to coincide with Formichetti's tenure at the house of Mugler, where he was named creative director in late 2010. Between then and his first show in March 2011, the two collaborated on many custom pieces, including the alien-y, rock 'n' roll leather look she wore for the album cover shot by Nick Knight. "I think that cover was what really set the tone for the entire era," Formichetti says, "which was about the duality of real life and fantasy, and the two worlds colliding.

When his debut show for Mugler finally took place, Gaga flew out to Paris to walk the runway twice, first in a black latex bodysuit and then an all-white Goddess-like finale outfit. But her biggest statement that night occurred off the runway, when she took one of the black leopard-print jumpsuits from one of the racks backstage and wore it to the brand's afterparty.

Around the same time, the music video for "Born This Way" dropped, which once again saw Formichetti and Knight collaborate. "The visuals represented this fantastical, very colorful environment, but also the darker side, so there was always this duality of good and evil," Formichetti says. "We weren't scared of hacking the evil side, because in a way that represented a lot of what Gaga was about which was taking ownership of our dark side and our rights and making it our own, so that felt very empowering in a way."

Lady Gaga arriving at Mugler's afterparty in Paris in March 2011. (Photo via Getty)

Gaga went on to release "Judas" and "The Edge of Glory" prior to the album's official launch on May 23, 2011, which saw Formichetti work with both younger and established designers alike. For the "Judas" video, then-emerging designer Alex Noble created a custom blue leather fringed outfit for the singer's "Judas" video, while her "The Edge of Glory" video was all about this '90s Versace look. There was also a continued emphasis on late Alexander McQueen looks, a relationship that Gaga carried with her from her The Fame armadillo shoe-wearing days.

Formichetti's creative collaborators would go on to include legends like Steven Klein and Inez & Vinoodh, all of whom played an important role in the storytelling aspect of Gaga's music and fashion projects during BTW. And that's ultimately what has remained at the heart of both Formichetti's and the Haus of Gaga's creative conversations, which continue to this day.

Lady Gaga wearing Mugler by Nicola Formichetti at a "Born This Way" press conference in 2011. (Photo via Getty)

"For her it was very important to create a space and community to include everybody," Formichetti says. "And that's what was amazing for me, was seeing the beauty of pop culture where it's not too exclusive. It's very inclusive and community-based, and I feel like that's when this idea of the Little Monsters and her fandom really formed into this big community. It was very beautiful to see."