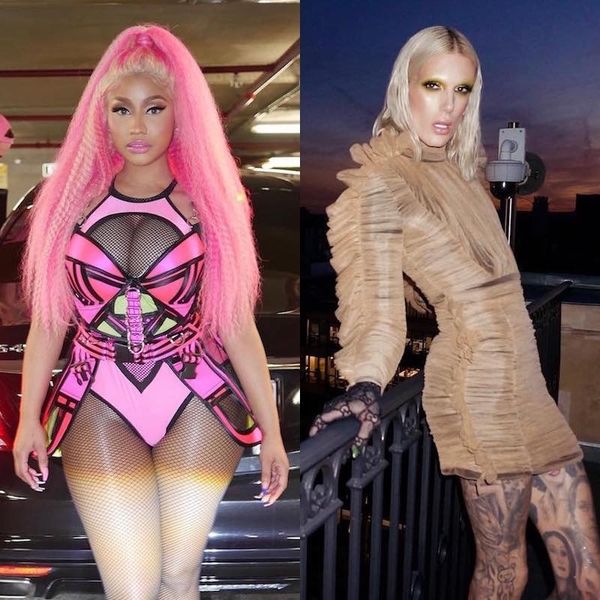 Before She Was Famous, Nicki Minaj Rapped on This Jeffree Star Song

When Nicki Minaj appeared on Jeffree Star's single "Lollipop Luxury," the Brooklyn rapper was largely a mixtape artist, just beginning to generate buzz through Myspace and her growing relationship with Lil Wayne. She'd released her debut mixtape, Playtime Is Over, in July 2007, her second, Sucka Free, in April 2008, and Beam Me Up Scotty in April 2009, which helped launch her to a new level of hip-hop fame through its chart-topping track, "I Get Crazy."

As the self-declared "Queen of Myspace," Star was arguably one the most visible figures on the social media platform, which hadn't yet been overshadowed by successors Facebook, Instagram or Twitter. He became popular initially as a makeup artist, painting the faces of celebrities like Kelly Osbourne, and eventually eased into electronic music, first through his 2007 debut EP, Eyelash Curlers & Butcher Knives (What's the Difference?).

He was polarizing, but he was powerful, flaunting a bubblegum pink, feminine persona that danced with gender and dark motifs, from serial killers to fallen celebrities. Though millions of Myspace users loved to critique him, they loved even more to click, comment and constantly come back. So it made sense for a rising artist to partner with Star at the time — especially someone like Minaj, who was securing rap credibility while also creating a bond with her young LGBTQ fans, who then were wearing skinny jeans, dying their hair jet black, and frequenting Warped Tour.

"Lollipop Luxury," co-written by Star and produced by Smile Future, was initially released without Minaj on his 2008 sophomore EP, Cupcakes Taste Like Violence. Packaged with glittery synths and unruly arrogance, the track was a climax in the musical style Star had been carving out for himself online. It ambitiously united all of Star's obsessions — candy, wealth, sex, self-obsession, and celebrity — inside a dance-pop single blatantly designed to shock.

Following the track's success, Star announced he'd be rereleasing it on his debut full-length album, Beauty Killer, through his own record label Popsicle Records. This version would feature a guest appearance from Minaj, which officially dropped in September 2009 — only one month after the breakout rap sensation signed with Young Money Entertainment. "Lollipop Luxury" was before "BedRock," before "Roger That," and well before Minaj finally unveiled her first solo single, "Massive Attack," in March 2010.

Her verse kept in line with Star's original cocky flow: "I'm a super superstar on Hollywood Boulevard/ And I can make all of the boys come to my yard," Minaj raps with a bratty attitude through autotune. "You see Jeffree, I can show you how to do it/ Make-make a lollipop squirt squirt a lot of fluid."

Their collaboration was one of the more pop-friendly tunes on Beauty Killer, which had cover art (shot by Kat Von D) with Star's hands wrapped in bandages and dripping blood. Other tracks were doused in searing electric guitars, twisted storytelling, and more aggressive punk-rock production — a shift from the Peaches-inspired electro of Cupcakes Taste Like Violence. On "Get Away With Murder," Star threatens to break his lover's heart without any consequences; "Louis Vuitton Body Bag" features Blink-182 guitarist Matt Skiba; and "Love Rhymes With Fuck You" outlines an insane, masochistic love affair: "You're trash, but it feels like love," Star shouts.

Beauty Killer became Star's first project to chart on the Billboard 200 at No. 122, and it also peaked at No. 22 on the U.S. Independent Albums chart. But the LP largely became only a cult staple among scene kids, mall goths and emo queers, who have now grown up to become the adult consumers supporting Star's multi-million dollar beauty brand, Jeffree Star Cosmetics.

Minaj's 2010 debut album, Pink Friday, went on to be a massive success, with hits like "Moment 4 Life" and "Super Bass" catapulting the rapper from a trendy Lil Wayne co-signee to the world's biggest pop star. And "Lollipop Luxury," with its risky, outsider edge, remains one of the strange, unsung gems behind her rise to the top.