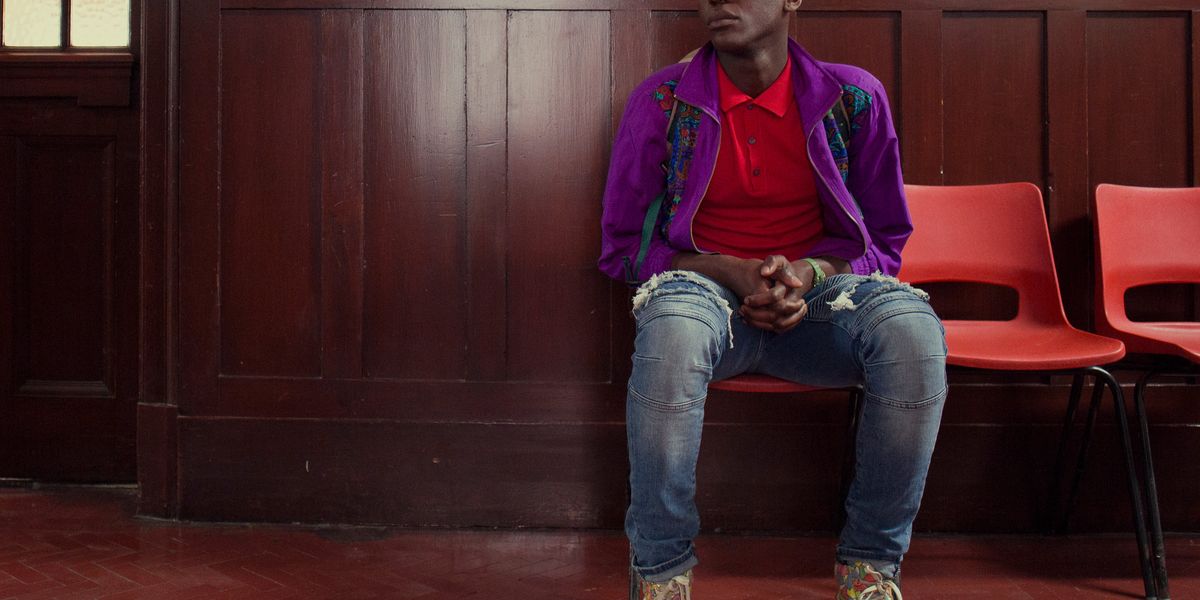 Netflix's new series Sex Education follows Otis (Asa Butterfield), the son of a professional sex therapist who winds up running an underground sex therapy operation of his own — treating his classmates who are going through the awkward pains of teenage sex. But the show doesn't just talk about sex, it talks about sexuality. And one of the characters that shines brightest on the show is Eric Effiong, a loud and proud gay black teenager with a socially awkward straight white male (Otis) for a best friend, who does everything but play into the "gay best friend" and "POC best friend" stereotypes.

Gatwa chats with PAPER Magazine about being the voice for a "minority within a minority," shooting the most awkward scenes, and what he wants for Eric in season two (if it happens).

PAPER: Eric is one of the only portrayals of a young black gay teenager. Why do you think that's important?

Ncuti Gatwa: "First and foremost, what I love about that storyline is that it's not that classic coming out story. Eric is out, and everybody knows he's gay, and it's what happens after he came out. And so exploring that is really interesting, and seeing how he's dealing with the world around him that knows who he is. Being a teenager is a testing time, because you're figuring out who you are in the world, and where you stand in the world. When you're a minority within a minority, and you're starting to realize 'The world's not going to love me as much as it loves my white friend, or my straight friend.' It's tricky."

"We haven't seen a lot of gay black teenagers on TV, especially like Eric. And so, to see it represented on TV, I just hope Eric speaks to a lot of people who haven't see themselves represented on TV thus far, and they can seek solace in the fact that it's fine to be whoever you are. Like Eric says in the seventh episode, 'I'll be hurt either way. Isn't it better to be who I am?' The fact that Eric is just so who he is, I just hope people can look at him and think that it is okay to be who you are. And it's really important that he represents a lot of intersections, because the world is so diverse, but we only see a certain amount of people in the media. I just it's just important to see yourself represented, and I wish I had a show like Sex Education when I was younger."

"When you're a minority within a minority, and you're starting to realize 'The world's not going to love me as much as it loves my white friend, or my straight friend.' It's tricky."

Did you realize just how important it was when you took the role?

"To be honest, I was just more excited to play him. I was thinking about how awesome of a character he is. I think before we started filming, as I was doing my script preparation and line learning, that's when it dawned on me that he's going to be such an important voice for so many people. And in the last four episodes, he goes through such a journey, and he's resilient in his strength. He represents strength in a way that hasn't been portrayed before, and I really wanted to get that right. The show deals with masculinity at many different points, and I think what we've tried to do — and I hope that we've done — is show that masculinity can be multi-dimensional, and there's no one particular way to be strong."

What did you have to keep in mind while being Eric?

"I really wanted to get him right, because there's a lot of people who are going to be looking at him, and seeing themselves in him. It was important to me that he wasn't a caricature. We've seen the gay best friend caricature, and we've seen the black best friend caricature, and I really wanted to move away from that. Shout out to Laurie Nunn for writing such a well-rounded, fully-fleshed, gay black character, because you're in danger of making him comedic relief. But he has such a beautiful and creative story arch in the show, so it was important to me that he wasn't a stereotype."

As we both know, there are many admirable qualities about Eric. One of those qualities — and I think many people will agree — is how well he handles a banana.

"Oh my god! That scene! We went through about 300 bananas, you know, all three of us: me, Mimi Keene who plays Ruby, and Simone Ashley who plays Olivia. We just had to keep getting caught, and it was like "New bananas! New bananas!" There's actually a video on YouTube where a girl eats a banana, and it gets stuck in her throat. I think we just watched that before we shot that day, and said, 'This is what we're aiming for.'"

How would you describe your own coming-of-age and sexual awakening?

"I had quite a thorough sex education from Scotland, and they had actually just introduced LGBT education into their curriculums. Everybody has to learn about LGBT history.

But my sexual journey… I don't know. It's the same as anybody else. I lost my virginity when I was a teenager, and it's just quite awkward, isn't it? It's uncomfortable and weird. Well, obviously, it gets better as you get older. You think you know what you're doing when you're young, and it gets better with time and practice."

"Shout out to Laurie Nunn for writing such a well-rounded, fully-fleshed, gay black character, because you're in danger of making him comedic relief."

How different is Ncuti's style from Eric's style?

"They're very different. I think I'm a bit more bougie than him," he laughs. "But I definitely share his affinity for well-fitted and tight clothing. Eric is a lot more brave than I am, and he is willing to try anything: mismatched clothes, color-block clothes, and put on a whole ensemble of things that might not work together. I'm a Libra, so I do like to look good, so I try to put my outfits together more carefully. I think I'm more of a coordinated, fitted dresser than Eric."

That bright orange look was… a look.

The online queer community has been celebrating Eric. Have people been sliding into your DMs? In a totally platonic way, that is.

"I've had some beautiful, beautiful DMs from people talking about how they feel so much more comfortable to be themselves. Honestly, it warms my heart more than anything. I'm a very cynical, grumpy Brit occasionally, and it's definitely warmed my British heart the amount of love that Eric has gotten. I'm happy to play this part, and be that voice for people. It's definitely an honor and a privilege."

What would you want for Eric if season 2 happens?

"I would like for Eric to continue discovering who he is, and coming into his own. I would like him to get better at playing the French horn, because he seems to be really into that. And then also, potentially find love. I'd be quite exited for Eric to find love, because he's got a lot of love to give, and it would be quite nice for it to be returned."