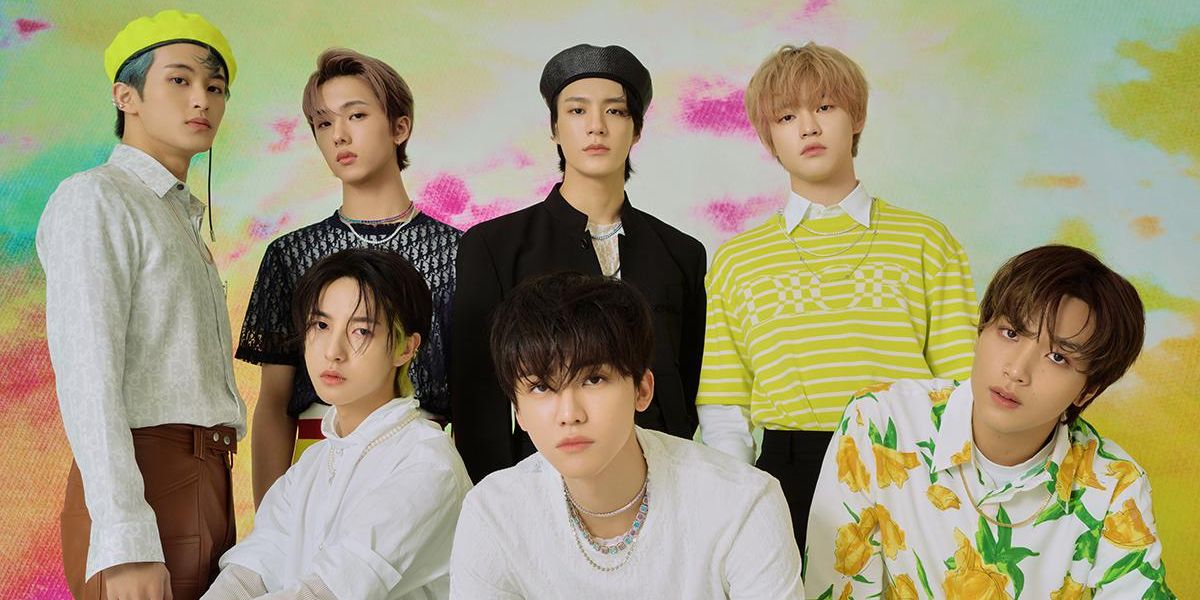 "Our dream is world peace," Mark Lee says with a smirk. While I'm fairly confident the 21-year-old rapper is being facetious, with NCT Dream you never really know. That's part of the K-pop septet's charm: the line between sincerity and absurdity is consistently blurry.

Still, it's the kind of statement that's made to elicit one of two reactions: an exaggerated eye roll or outright laughter. The other members of NCT Dream, affectionately called "the Dreamies" by their fans, settle on the latter, erupting into cacophonous chaos as Mark continues his train of thought. "That is our ultimate goal," he tells PAPER from a beige conference room in Seoul. It's been a long afternoon of press for the group, and Mark's trying to maintain his leaderly composure, but it's a losing game. "Through our music," he smiles like a kid with a secret, "we will be the heroes of the universe!"

Beside him, vocalists Haechan and Renjun deliver a hearty, harmonious "to the world!" in agreement — a playful nod to the NCT collective's global vision and Dream's wavering attention spans.

This is generally the vibe when Mark, Renjun, Jeno, Haechan, Jaemin, Chenle and Jisung are together. As Haechan describes it, in English, "We're so loud, so noisy and so happy." These days, they have a lot to be happy about. Their first studio album Hot Sauce has sold over two million units since it dropped in May, becoming the highest-selling K-pop album of the year so far and making history as their titanic label SM Entertainment's best-selling release ever. To seize the momentum, NCT Dream returned last week with a repackaged edition of their chart-topping hit titled Hello Future featuring three new tracks. It sold more than half a million copies in a single day, shattering previous records.

It would be disingenuous to suggest that the Dreamies don't care about the numbers. They do, to an extent. Becoming double million-sellers by the age of 21 (oldest member Mark turns 22 in August, while youngest member Jisung is only 19) is certainly cause for celebration. "We'll show you our reaction [to the sales]," Mark prompts, silently communicating with the members around him. "Ready?" Within seconds everyone is screaming and cheering, their expressions hidden underneath masks and low-brimmed bucket hats. But even the most covert sartorial choices can't conceal their excitement. "One million!" Haechan, a honey-voiced showman, booms.

Asked if they feel the weight of their success, they balk at the suggestion. "I wouldn't use the word pressure because that means we're scared," Mark says. "We're more like…" he drawls, searching for the right word to explain this surreal moment in time. "Thrilled? Yeah, thrilled."

"Before we even heard about the sales we were just excited to come back as seven members with our first full-length album," he continues. "After hearing about all of the recognition and support we were receiving, that feeling doubled. We're more excited and determined to show our fans that they haven't waited in vain." And their fans, unofficially known as Dreamzens (a play on NCT's fandom name NCTzens), have been waiting. Their last release as a seven-member unit was the 2018 mini album We Go Up.

Related | From PSY to BTS: The Decade K-pop Went Viral

The reason for the wait is… complicated. First, you need to understand the nebulous concept of NCT, or Neo Culture Technology. There are currently 23 members and four official units (NCT 127, NCT Dream, NCT U, and WayV) under NCT's fold, with the lingering promise to add more fresh faces from around the world. NCT Dream was originally conceived as a rotational unit for NCT's teenage performers. The idea was that the members would graduate once they turned 20, the legal age of adulthood in South Korea (19 internationally), opening the door for even younger idols to fill the ranks. NCT Dream would stay forever young and mercurial, the very essence of adolescence.

But Mark's graduation in 2018 made it clear that nobody was prepared to say goodbye, not the fans or the Dreamies. They'd been together since their trainee days when they were just a crew of floppy-haired tweens chasing their shared dream of stardom. Jisung was in primary school when he began his training at SM, and he, along with Mark, Jeno, Haechan, and Jaemin, were part of the company's pre-debut team SM ROOKIES, as well as Korea's version of The Mickey Mouse Club. Renjun and Chenle were then recruited from China, and their bond as seven was forged over late nights spent in and out of practice rooms, vocal lessons, performance evaluations, entertainment showcases, and midnight snacks. They came of age together under extraordinary circumstances, and that endeared them to a loyal following.

"We're very comfortable with each other," Mark says. "What we have is very genuine. There's a level of vulnerableness that we share when we're together. We're very aware of who we are individually, and that helps us keep things real. We don't have any layers between us."

The K-pop training system is notoriously rigorous, and only a handful of promising young hopefuls ever make it to the stage. The fact that they got to make their debut together is some kind of miracle. "I feel very lucky to be a part of NCT Dream with these members," Jisung says. The teen dancer's soft demeanor is a confusing contrast to his razor-sharp performance skills and deep voice. "We've been together for so long. I was in elementary school when I met [them] for the first time. We're all very different, but because we've spent so much time together we feel like family. These are my brothers."

According to Mark, that's the key to their success. And it's this winning dynamic that forced SM to scrap the initial plan for NCT Dream and make the original lineup, dubbed "7Dream" by fans, a fixed unit. "We all wanted it as much as our fans did," Mark says. Now, he adds, they want to "focus on how we can seize this opportunity to the fullest."

It starts with their teamwork. They're each other's biggest supporters and toughest critics. They know exactly which buttons to push — and, most importantly, when to stop. "We can't avoid each other," Mark says. From rehearsals to music show tapings to variety appearances to their shared living spaces, they're around one another 24/7. "We learn to respect each other's boundaries and respect each other's spaces, physically and mentally."

For Renjun, it's all about trust. "Once you trust the other individual, you believe in them and they're able to open up to you," he says. Take his friendship with Haechan: the dynamic vocal duo never miss a chance to antagonize each other — Renjun's sarcasm is a natural foil to Haechan's witty charisma — but that's a testament to their closeness.

"We may be different," Chenle adds. "But respecting that difference and being able to work together is very important."

It helps that so much of their work is intrinsically tied to their IRL camaraderie through YouTube vlogs, TikToks, and digital shows that reinforce the notion that idols are just like us — they get competitive over beer pong, they grill their own meat, and they singalong to their favorite artists. They're your average Gen Z content creators. "We're always focusing on how we can highlight our chemistry through every creative outlet," Mark says.

Even their discography tells the story of NCT Dream. They debuted in 2016 with "Chewing Gum," a sugary sweet pop confection with a sticky, repetitive hook and bright, quirky aesthetics. They performed on hoverboards in striped crew socks and Vans. But with an average age of 15, what truly separated NCT Dream from their K-pop contemporaries was their youthful panache. Follow-up singles "My First and Last" (a breakthrough hit) and "We Young" evoke the same cheerful spirit. "So what / We hot / We young," they sing on the 2017 trop-pop track. As the members matured, so did their music. 2018's "Go" was a rebellious anthem full of trap rhythms and bratty attitude, while "We Go Up" merged their pop dynamism with hip-hop for a fresh new sound.

"NCT Dream in itself is a representation of growth," rapper Jeno explains. "If you listen to our songs, not only do we have lyrics that express our own stories, but they show our transition into adulthood — going from our teens to our 20s, and now from our 20s to our 30s. We're coming of age along with our music."

Their Mark-less releases "Boom" and "Ridin'" not only solidified them as heartthrobs but also as artists with real selling power. Trading hoverboards for fast cars and motorcycles, they embraced a sleeker image without abandoning their signature verve. "We're growing with every album," Haechan says. "Not only have we matured, but the quality [of our music] gets better, too."

NCT Dream's expanding musicality culminated in Hot Sauce and its tangy title track, which rapper Jaemin admits was a "new try" for the group. Anchored by a hypnotic afrobeat sample, "Hot Sauce" is a flavorful mix of genres and ideas. "It's very different for us," Jaemin says, citing the track's chant-like hook and "easy" point choreography (like whipping meringue). "A lot of people can follow along. It's very catchy."

"With this one, especially, it's very special to us," Haechan adds. "We're back together as seven." This sentimentality is best captured on album closer "Rainbow," a soaring pop ballad that finds NCT Dream reflecting on the halcyon days of their youth. "Through the memories we made together," they sing, "we walk the same road, laugh the same way / Dream the same dream."

Now, with "Hello Future," they're charting the next stage of their careers. Vibrant and carefree, the song is a welcome return to Dream's prismatic pop roots while embracing the futurism of their newer work. "Big dreams and big thrills," Mark raps. "Flying high, imagine the absurd."

Five years in, and NCT Dream have reached a crucial moment of clarity: the awareness that growing up doesn't mean losing yourself.

"We try to keep it dreamy," Mark laughs. Yet, at that moment, I think he's being completely serious.