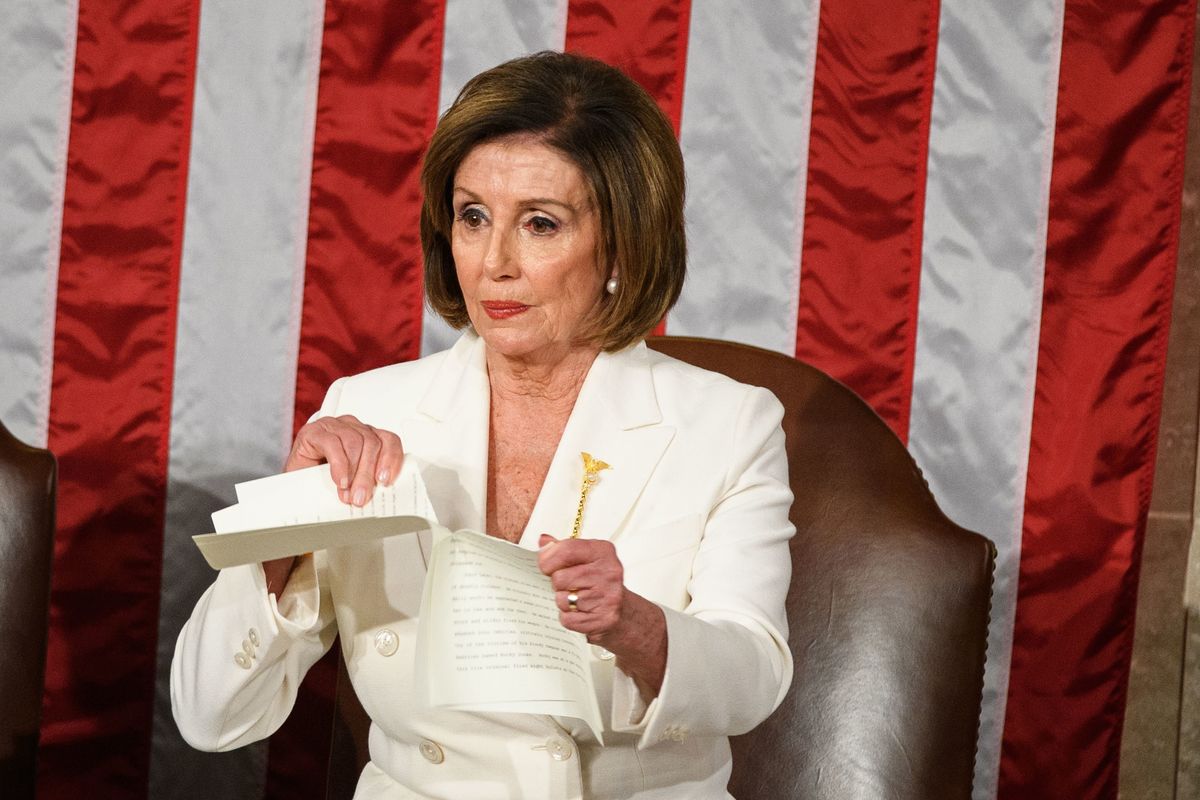 House Speaker Nancy Pelosi has long been a target of President Trump's ire, but her intolerance of his erratic behavior reigns supreme — at least on the internet.

A slew of memes and GIFs of Pelosi circulated online following Trump's third State of the Union (SOTU) address, which featured "multiple misleading claims and exaggerations" about everything from "tremendous" economic booms to a decline in overdose deaths, according to a New York Times fact-checked report.

Clearly, Pelosi had enough. As Trump concluded his speech with the words to applause, Pelosi ripped her copy of the speech in half. When Trump first entered the room, Pelosi offered her hand to him, but he refused to shake it, instead turning to face the audience.

But these exchanges weren't the only instances of presidential shade. As CNN anchor Jake Tapper pointed out in a tweet, Pelosi subtly snubbed Trump as well. When introducing him, she said, "Members of Congress, the President of the United States," rather than... a typically more decorated greeting.

Traditionally, the Speaker says: "Members of Congress, I have the high privilege and distinct honor of presenting… https://t.co/BpmYqhnRKy
— Jake Tapper (@Jake Tapper)1580869065.0

Pelosi wanted viewers to know that her actions were absolutely intentional. In a video tweeted by Fox News producer Jason Donner, she looked straight into the camera and said, "It was the courteous thing to do considering the alternatives."

Speaker Nancy Pelosi on why she ripped up President Trump’s speech: “Because it was the courteous thing to do cons… https://t.co/OBEtn6mJee
— Jason Donner (@Jason Donner)1580874266.0

Pelosi's disdain for Trump has been longstanding. Last year, she seemed to clap sarcastically for Trump during the 2019 State of the Union address, which also turned into many viral memes. The internet's response to this year's SOTU is no different.

Pelosi and her tearing of the speech is currently trending on Twitter: #NancytheRipper, #NancyPelosiROCKS and #RipitUpNancy. Many found her action satisfying, as it symbolized her refusal to back down, and the ripping continues to overshadow Trump's actual speech. For the far-right, she is trending with the following hashtags: #PettyPelosi and #PelosiMeltdown, showing how divided people are on the matter.

#NancytheRipper means she wins again. What SOTU speech? All I saw was Nancy ripping her copy and that’s all we will… https://t.co/qSZDONQOdW
— Paul Tre (@Paul Tre)1580902914.0

Nancy Pelosi ripping the lie filled speech was very becoming and appropriate to me, it was speaking truth to power,… https://t.co/X2kQrV7MWa
— Mayday Mindy🌊 (@Mayday Mindy🌊)1580905802.0

The same people outraged that Pelosi tore up a piece of paper filled with lies and Russian talking points, are the… https://t.co/fgmT4tyWNG
— Mrs. Krassenstein (@Mrs. Krassenstein)1580905626.0

I for one am glad #NancytheRipper is trending. Otherwise, we'd be analyzing/repeating all the lies he stated in his… https://t.co/txCXLTgD0B
— Wardah Khalid (@Wardah Khalid)1580917825.0

The State of the Union address was delivered the night before the Senate votes in Trump's impeachment trial, which will occur today at approximately 4 PM ET. Pelosi's full statement issued after Trump's SOTU address can be read here.

The manifesto of mistruths presented in page after page of the address tonight should be a call to action for every… https://t.co/8ZdgT9Ugxb
— Nancy Pelosi (@Nancy Pelosi)1580879088.0