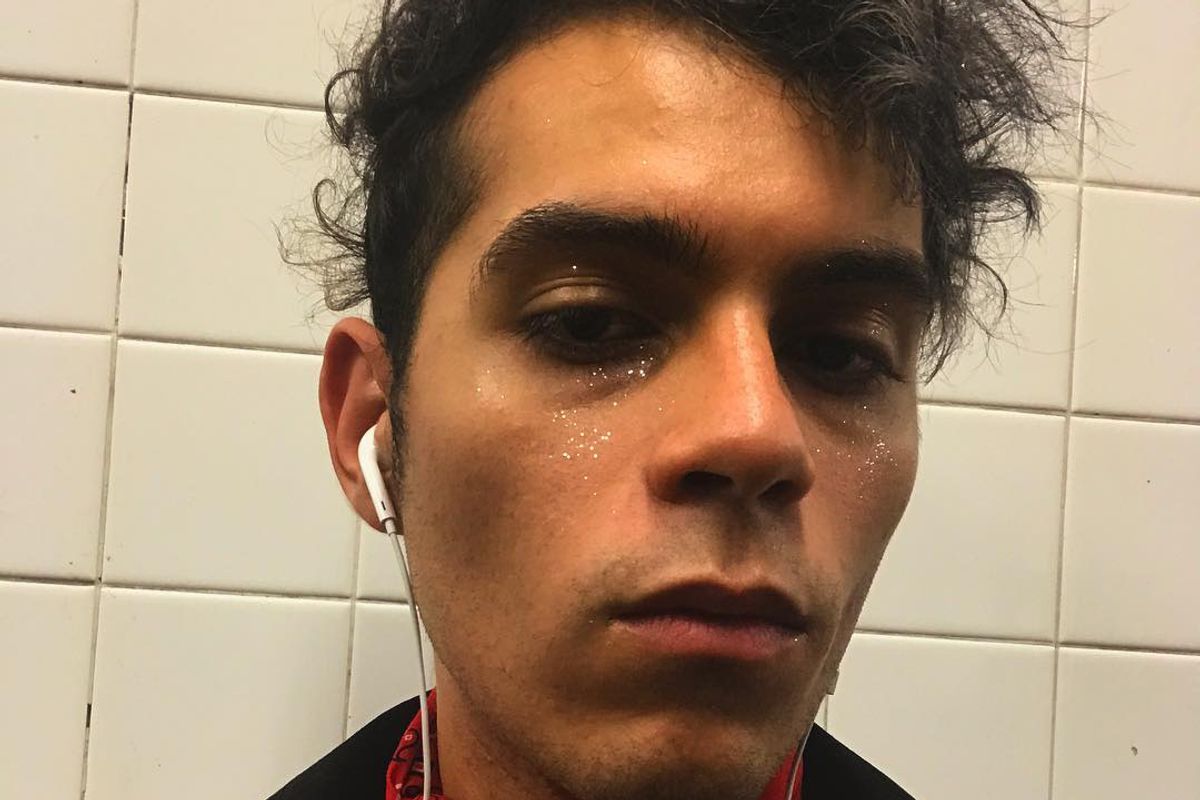 My Life in Queer Purgatory

A personal essay on bisexual erasure, Catholicism, and coming-of-age as a queer Latinx in Miami.

The last time I went to church was by accident. A year ago, I traveled alone for the first time and found myself meandering Vatican City. Exhausted of the heat, I fought a large crowd of tourists to enter St. Peter's Basilica, where an even larger crowd awaited me clamoring over the "Pieta." Ironically, it was hot as hell.

I made my way past the crowd, past the towering Papal Altar, and caught my breath in the first pew I could find. I had spent the day wandering the famous Vatican Museum. As I caught my breath in full view of the altar of St. Peter's chair, admiring the golden angels and stained glass, the pews began to fill. Not ten minutes later, a priest came to recite the first blessing.

I chose to sit, in part because my Catholic mother would have killed me if I had left and in part because I literally could not move. My Italian comprehension being subpar—all the native Spanish fluency in the world couldn't prepare me for how fast it's spoken aloud—I let the priest drone as my mind wandered.

I thought, mostly, about the large busts of Antinous and the Roman Emperor, Hadrian. The priest read from the book of Job. I thought about the explanation under the massive marble homage of the handsome, broad-shouldered boy with thick ringlets of hair framing his square jaw:

The face of the emperor Hadrian's young "favourite" is framed by thick hair with thick, curly ringlets falling over the forehead and below the neck...This unusual hairstyle has been connected with Antinous' servile beginners as an imperial slave of the emperor Trajan's "familia".

I cringed at the word favourite.

I thought about another pair of busts depicting Hadrian and Antinous displayed next to each other at the British Museum:

The old woman next to me, wearing a green cowl, nudged me, whispering something in Italian. The priest had finished his reading, had praised God. Everybody took their seats. Antinous was Hadrian's lover.

I was fifteen when I came out as bisexual. It was Halloween night in Miami, and I was sitting in the back of a pickup truck with my closest friends laughing and surrounded by freshly-opened Twix wrappers. I think we watched a movie and stayed up past the bedtimes we used to have.

When I eventually told my parents a few years later, after I had fallen in love with a man and had my heart broken, the reaction was similarly accepting. I remember thinking that this was how it was supposed to be when you came out.

I grew up watching all the TV specials where the oft-bullied character comes out and then there's a big musical number at the end. I grew up reading about gay teenagers being kicked out of their homes.

I grew up in a school where, despite 95% of the student body being predominantly Hispanic and machista heteronormativity being the norm, I wasn't bullied for being open. That said, even the people that suspected never really asked. I believe this was because most of my friends were straight, although most of them would come out in college.

At the time, I didn't have a community to turn to, at least not one where I felt accepted among my own as opposed to being the "token gay friend." Once I started exploring Miami's night-life and meeting actual queer people, most of them were gay. I was appalled at how unwelcome I was simply for being bi.

When I went out I sheepishly mumbled I was gay. At 16, in clothes that were too tight for my still-growing body, I don't suppose I was attractive or convincing. I felt half-formed as a queer person, and that discouraged me from looking for any semblance of a queer community until I moved to New York City.

And then new challenges. Along with the typical challenges that come with living on your own for the first time, I began to ride the wave of exploring my "gay" side, and I met all kinds of boys.

Although I did eventually start dating men, I also found myself still dating women. Just like some of the boys I pursued, I was turned away for something I couldn't change.

Bisexual people are still subject to ugly stereotypes, the worst being the inability to remain faithful. When it comes to bisexual men, it's sometimes even misconstrued with not being a man, another issue altogether that continues to plague every man on Grindr seeking "masc for masc."

I've grown so much more comfortable in who I am, but instances like this continue to attempt to invalidate or confuse what it's all about. Sexuality has always been a grey area for me. It took a while before I began to stand up for myself when people would try to project black-and-white opinions of sexuality onto me.

It took noticing the differences and similarities between people to know that loving them is the same no matter their gender. I don't even mind how many people I have to explain bisexuality to on a daily basis. I would take explanations over erasure any day.

I remember the first time I read Vita Sackville-West's letters to Virginia Woolf; I was shocked, not because I read accounts of love between women before I even started thinking of myself as queer, but because I knew both women had husbands.

I began to read about open marriages, about bisexuality, about openness. If people in the 1920's could be this fluid, why couldn't people in the modern day understand? Why did I have to look as far back as Virginia Woolf to find bisexual role models? Why weren't there any bisexual male role models? And why was it so difficult to find queer role models of color that I could relate to?

It was for that reason, however problematic and stereotypical he was, that I was happy to see Oberyn Martell appear on Game of Thrones, played by none other than Pedro Pascall. It was for that reason that the first time I heard Frank Ocean's "Chanel" I broke down in tears.

All of this said, I prefer queer. I allow pansexual. I offer bi as the easiest explanation for being attracted to everyone. I still wander in cathedrals, admiring their marble columns, their statues. I'm thankful every day I have a family that's as receptive as they are Roman Catholic, walking the path paved by an astonishingly woke pope. As difficult and frustrating as it can be, I'm perfectly content living in purgatory.