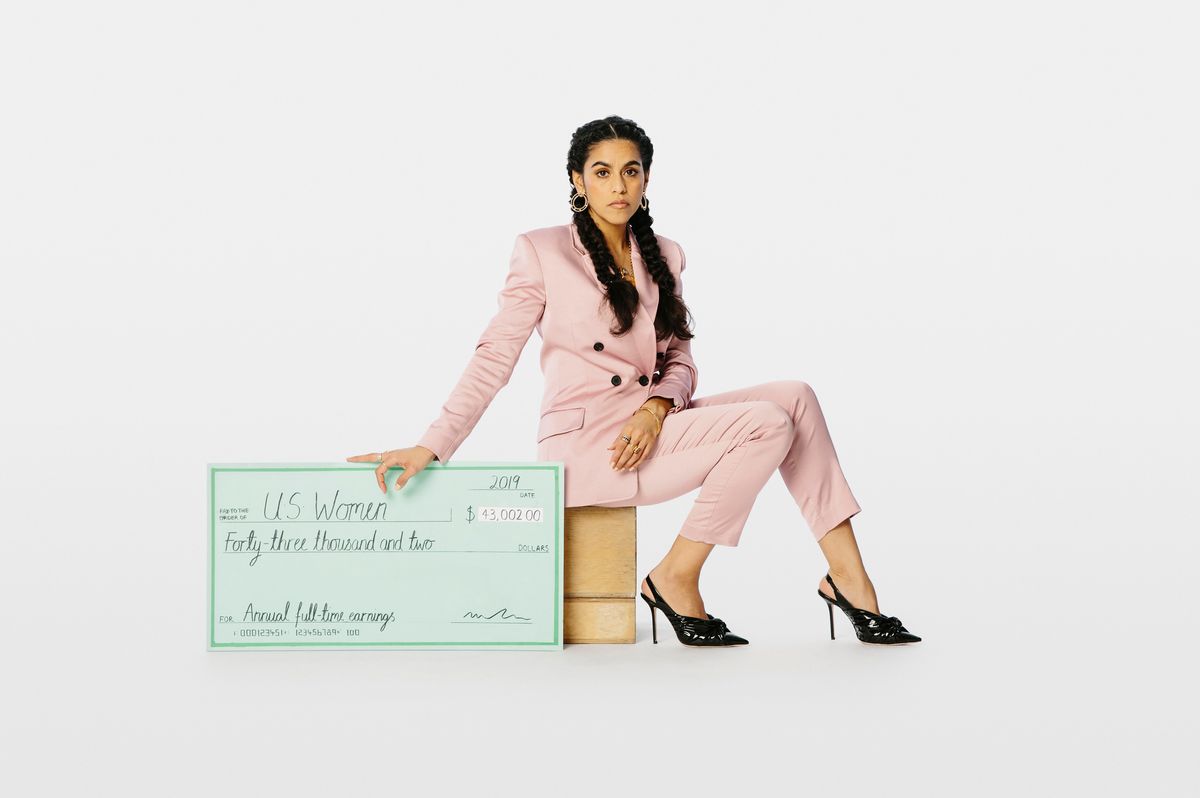 Welcome to Another Equal Pay Day

By now we've all heard of the wage gap: the difference on the dollar between what men earn and what women earn. "80 cents on the dollar" is what we hear and what we know, but not often enough do we recognize that a whole dollar goes a very long way.

This Equal Pay Day we thought it might be interesting to take a look at what money really can buy. Sure, Biggie said, "more money more problems," but maybe it's like, more money, more hours of therapy? More student loans paid off? More child care, even health care? And I don't know, maybe the vintage Mercedes Benz of my dreams? Just a thought. We brought in Mona Chalabi, a data journalist and illustrator covering a diverse range of topics including politics, race, gender and economics, to help illustrate on a grander scale how large the wage gap really is.

Of course, there is no "average" American woman. When you break down the numbers, today is for the most part white women's Equal Pay Day. Black, Latina and Native American women still earn even less than their white female counterparts, and therefore the day that they finally earn what the "average man does" comes months later. (Black women make about 63 cents on the dollar compared to men, while Latina women make 54 cents).

PAPER sat down with Chalabi to talk about the definition of the wage gap, her research and her findings and her experience as a woman in statistics.

Was there anything that shocked you in your research around the wage gap?

I feel like the process is always straightforward. I always know it's the Bureau of Statistics that publishes this specific data. I think I was still a little bit surprised at how much it totals out to, as a difference on an annual basis. Ten thousand dollars is a shit load of money. It's just so much money. I really think about how 80 cents on the dollar sounds really bad, but give me ten thousand extra dollars. It makes me mad in a different way.

When you put it into context, it totally changes. I got introduced to your work through the folded dollar illustration and although that was a great visualization, it's also hard to think about finances in terms of one singular dollar. It doesn't really drive the point home.

Right, it's already a simplification. You know you're not getting paid a dollar, so you're already being asked to do some kind of mental arithmetic to figure out what that difference looks like. And even for ten thousand dollars of course, you're going to be a woman who is of a certain ethnic group in this country or in certain profession where that average salary doesn't actually match up with yours. But I still feel like it's easier to get mad about ten thousand dollars than about 80 cents on the dollar, maybe.

At least we're beginning the conversation, which is so complex. There is no 'average woman,' of course, and there's so many layers to this.

This information is also based on documented workers, so imagine if you're an undocumented worker who is a woman of color like, fucking hell, what that wage gap looks like is going to be insane! It's so weird for me to be shitting on statistics, I love statistic but what they do is they replicate the systems of power that already exist. For example, when I'm writing anything on sex or gender, do I have anything for non-binary statistics here? No! Because those people have been neglected for years, so they're also neglected in statistics. I published something yesterday about the age gap in sexual preferences. Do we know anything about non-hetero relationships? No! We're only just scratching the surface. I feel like even for me as like an Arab woman, Arab is never on anything. When I'm faced with a form or anything to be counted in a statistic I have to decide, am I 'White Other?' Am I 'Black Other?' Am I 'Asian Other?'

That's a whole other layer! If you're not represented, do you qualify yourself based on who you pass as?

Passing is part of it. My sister is also an Arab woman, but she's only just started identifying as Arab because she is white-passing. She felt uncomfortable using that language because of the way people interacted with her. She was like, "It's fascinating to me how inoffensive I am to people. I'm very non-threatening." Her opinion on all of that has changed, but even who we are as people has been affected by the fact that my skin is darker than hers. How you pass in the world, you can't take that out of the equation.

Originally we talked creating this project during Women's Month, which is a reminder that it's weird to dedicate a finite time to caring about marginalized people. How do you feel about Women's Month?

Many things in this country are mostly for capitalism. I think brands pitch stuff at us, and there's a certain lack of sincerity about it in the way it's done, but at the same time why not? Especially if it still means we can have a conversation. Basically, I feel quite conflicted about it too. It doesn't really mean anything, but now we're here.

And at least we're talking about it!

I keep on saying to myself, I want to cover more race issues when I know that Black History Month is coming. It's like, stop putting it off. It's here now, just do it. It's terrible that I need some stupid date on a calendar, but otherwise there's a reason to do something else.

As a social media manager, my life is spent online. Thinking about Twitter specifically, it really is interesting how many more people are able to engage around trending topics and hashtags. That conversation is now more accessible to other people because of this space it now takes up online.

Basically, it's like if you use that month as an opportunity to say, "We did something for BHM so we're not going to have any Black people the rest of the year," that's a huge problem. But you know, whenever I try to start a conversation, whether it's online or with someone IRL, it's really hard. If a conversation is already going on and you're like, "Here's something else to add to it," the whole job is easier. Having Women's Month makes it so you can add to a conversation instead of starting one.

Click here for more information on how to help close the wage gap.