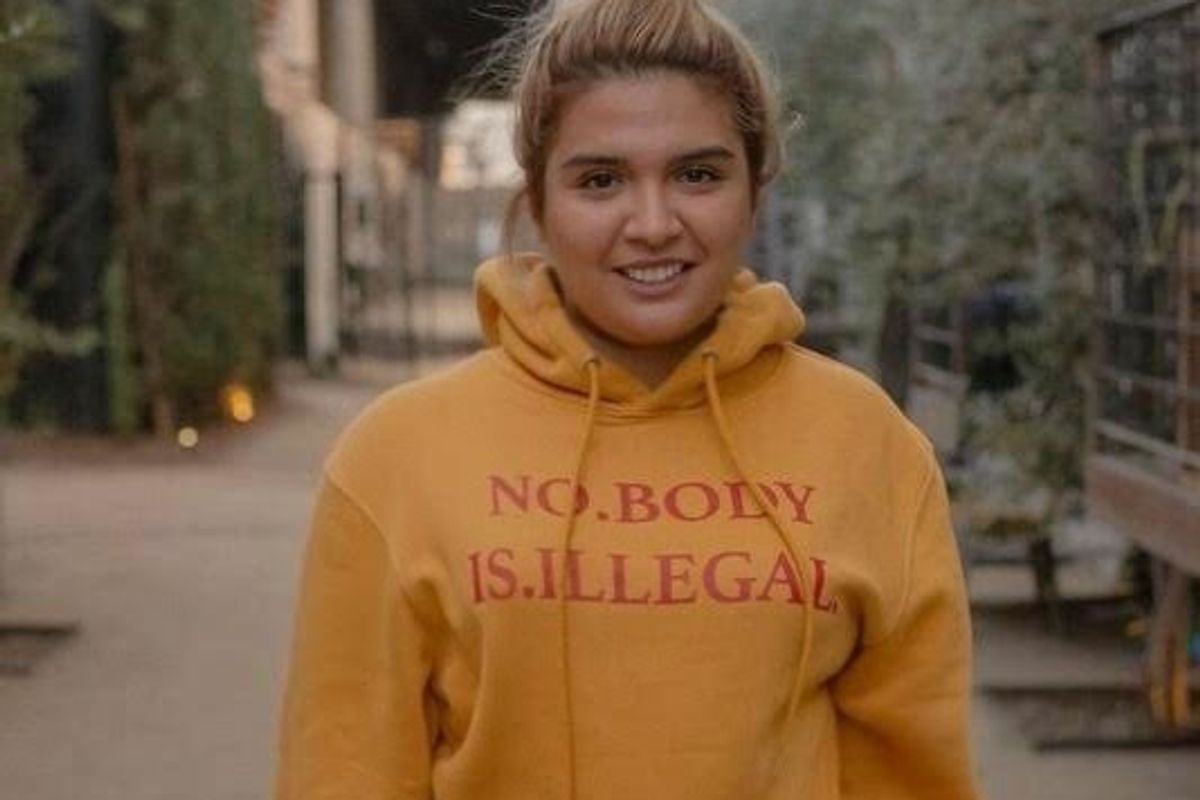 My friendship with Sara Mora began as all truly intimate ones do: online. Back in September, our DMs landed me an invite to her 23rd birthday party. When I arrived at her home in Hillside, New Jersey, the surrounds felt familiar — our mothers are both from Central America. Sara was still at the hair salon dying her hair platinum blonde, and when she finally arrived was unsure if she liked the new style.

It reminded me that Mora is like any young American girl — hot on social, manicure always on point, but she often gets shy in real life and hides in her hoodie. The difference with Sara is that her entire life could be taken away at any moment.

Related | Behold the Dreamers: 6 DACA Recipients on Trump, the American Dream and What the Future Holds

Mora arrived in the United States from Costa Rica illegally at three years old. It was a tough adjustment at first. "My parents literally went from having company jobs to working at like, the dollar store," she explains. "But they were the ones in their families that wanted more. A lot of people from our countries still see America as the land of opportunity. They wanted that for us."

In 2017 Mora was forced to face cruel realities when Donald Trump announced plans to end DACA. Deferred Action for Childhood Arrivals was established in 2012 as a temporary solution to a fractured immigration system. It's a crucial stopgap measure for Dreamers — young people who have grown up in America but are unable to gain citizenship benefits — and the Supreme Court may soon render it illegal.

This fate is incomprehensible to Sara. She refuses to feel powerless over her own future, and over the past couple years has decided to fight back, styling herself on social media as an "undocumented activist." We connected as she sat in a DC Starbucks on day two of the DACA hearings, actively launching a new digital campaign to elevate voices in the undocumented community and their allies.

Oh, my fucking God, yes, I am. It is so disrespectfully cold here.

Yesterday must have been hard. Como estas?

Yesterday was such a shitty day because DACA was trending globally and literally all the teams I work with were looking to me and I had nothing ready. It was really overwhelming — I almost imploded. I cried like 80 times, like, "Fuck, it's not gonna work." But we got so much love. I'm happy. I'm going to remember to breathe today.

We watched the rally from New York. What's the vibe in DC? How are people feeling?

I think there's a mix of emotion. A lot of people feel triggered by how loud the presence of everything is, because while it's encouraging to see people in solidarity, it's also not the first time this has happened, right? People have come together before and then things die out once it's not trending. I would say, for me, there's definitely a mix of emotions, for sure.

We won't get a ruling on DACA until 2020. What are your expectations?

I think my strongest thought isn't even an expectation, my strongest thought is like: If there's a time to mobilize and uplift the voices of an already powerful people, it's now. For way, way, way too long, our fate as a migrant population in this country has been in the hands of people who see us as an option and not as the human beings that we are.

So, I'm experiencing a mix of emotions that are triggering the work that is going to be coming out in the next couple of months for me. I'll be providing resources to the community to have influence over this conversation — not just be witnesses, as their fate is being decided for them.

Can you tell us about the new campaign you're working on?

Yesterday we launched a digital campaign called "This Is Our Testimony" for any undocumented person who couldn't testify and or any member of the community that wants to be involved. Essentially, a person like you could choose 10 people and have them post a video, all using el mismo script at the same time, because it represents all of us.

It's a digital campaign where we're all essentially testifying online and sharing it. You can go to my Instagram to get all the details. We're working with fashion designers and influencers…so many different people. I just got off the phone with Ava Phillippe, so we're really excited to get so much support.

Inclusion — giving everyone a voice, is important to you.

Very. DACA has been tokenized to an extent where DACA is the only trending topic and people think that undocumented means DACA. But really DACA only represents a quarter of the undocumented population. So many undocumented people couldn't fly out here, and we want all of them to have a voice. And although people in our community were given the opportunity to testify today, the government has attempted to erase the livelihood of the different people that exist in the migrant community. They're acknowledging DACA but they have yet to acknowledge the people that Customs and Border Patrol murders. They're failing to acknowledge the undocumented person within the system who is a farm worker and perhaps their circumstances make it impossible for them to fight for a living wage — getting paid way less than they should for the work that they do, if at all, right?

We're one year away from the presidential election and our community can't be erased. There are too many people who will be affected. And there are so many violent stories that have happened where the government has chosen to ignore the reality that these policies are literally a life-or-death thing for our community.

You're extremely adept at using your influence online as a tool for your activism. When did that start for you and how have you been able to harness it so well?

It started early on when I was really young. I've always been curious about how social media could be used to weave a tale or become a home for a person's life story online. When I graduated high school, I had originally used Myspace to talk about hope. Then I went from hope to interviewing the president of Costa Rica at 17. That's when I went viral in Costa Rica and I realized I could reclaim how the press had told my story.

When I realized fully that I was undocumented, I started asking questions. Every person, each leader I met, I asked questions. And the more I did that, the more I built community, because everyone had the same questions. So, I became a funnel for asking questions and sharing the results with other folks. And it helped people use that same format.

You're promoting your first event under the "Miss Sara Mora" platform. Can you tell us about it?

This particular event is going to be a party in D.C. on Friday, November 15. All proceeds will go to Otay Mesa Detention Resistance, which is a space out of San Diego that actively works on detention resistance for migrant families detained at the border and in other locations.

"This Is Our Testimony" is the commencement of me uplifting platforms and spaces that won't be led by my me, but rather supported by my resources. My biggest launch is definitely coming up in 2020. A lot of the details are still being put together but it'll be the biggest thing I've done in my entire career. It's why I stopped school in 2017 when Trump suspended DACA. It's taken forever, doing it from the ground up, aka grassroots, so it's really exciting to finally be able to launch it.

Whatever the Supreme Court ruling is, it has no effect whatsoever on your momentum. Whether this topic is trending or not, this is your life's work.

Basically. Because it's very important to note that DACA became a sort of leader for the movement, but that's not quite fair. Way too often the government divides the community and forces us to choose between each other and we're completely ignoring TPS, fully undocumented people and refugees. Refugees are being addressed globally and then undocumented people are being addressed "locally."

I do think the SCOTUS decision will be detrimental to the direction of migration and certain policies for 2020 and moving forward. So, it will have an impact. But, at least for me, as an activist, the goal is to not wait for people like Trump, or even a Democrat who seems like they're going to push through everything, but to actively have a movement going. To actively have the tools necessary to make change happen. A movement wouldn't have to exist, if change came.