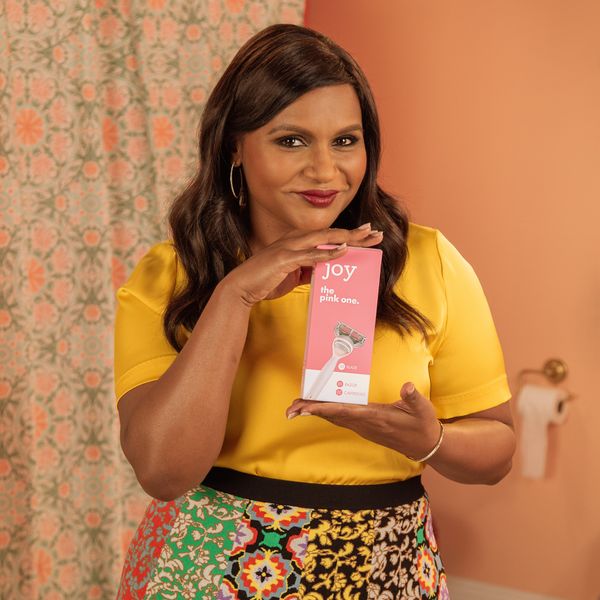 Mindy Kaling has consistently been on the front lines of a witty and empowering brand of comedy, carving her own niche in an otherwise male-dominated industry. With her charismatic performances on The Office, Late Night, and her own production, The Mindy Project, the actress is often pegged alongside the likes of comedy giants such as Amy Poehler and Maya Rudolph.

Now with a brand new partnership with independent razor brand, joy shave, Kaling is pushing for her fans to find the same sense of empowerment and joy in their shaving routines.

The new entrant in the shaving market identifies itself as an outlier in an otherwise saturated realm of pink handles and smooth razors. joy isn't selling big and false claims; instead it relies on simpler and attainable goals: to save your time, and make it easy, fun, and relaxing.

"We understand that shaving is not the most exciting part of your day and shaving can get a bit complicated and a little overwhelming," said Sarah Chow, head of joy shave."With joy, we're going to bring it all back to the essentials, so you can shave, rinse, and get back to doing all the other things you want to do."

The razor comes in two "universally appealing" pink and teal non-slip grip handles along with five blades. There's also a shave gel and a mousse that come scented with summer lily and cucumber aloe to enhance the feeling of relaxation. "joy does what it promises, and it doesn't make grandiose promises it can't keep," says joy Co-Founder and Head of Communications MyAnh Nghiem. "So, we promise to give you a great shave and try to make some witty jokes along the way."

Even though joy shave's ethos lies in empowerment, Kaling has rarely been involved in beauty brand endorsements, so this partnership comes as a bit of a surprise.

"I have made a career off creating my own opportunities," Kaling says."The films and TV work I've done, you would know that I've not based my career on my looks or being considered traditionally beautiful. So for me, business is not the normal way that usually works in Hollywood. I'm attracted to companies and brands who like that about me. I also just find that I don't know any other way so it's easy for me to stick to that."

Unlike most influencers and celebrities who either push their own personal labels or endorse fairly big names, Kaling has only decided to lend her name to brands she finds a personal connection with — a principle she has stuck to throughout all of her wide range of creative work.

Below, the actress, writer and producer tells PAPER about her new partnership with joy, why she won't get too political in her work, and the challenges of single motherhood.

What prompted you to do this collaboration?

I get approached by a lot of different companies to partner with them because I love my Instagram so much and I really take the people I follow seriously along with what they are actually selling, or making. I care about if it seems really authentic to them and if it is a quality product. I do the same for myself, so I have to see the actual product to trust it. With Joy razors, I tried them on and I just completely fell in love with the product. It's so simple. The razors are so pretty, the packaging is the best. And I usually use a men's razor. I used to not care that about how a razor looked really, but I put so much care into my other beauty products. I'm happy because these are just as aesthetically pretty, well made and as good as the stuff I am putting on my face. So, I'm really excited about it.

Empowerment has been a major theme across your work and also this collaboration with joy. Why has this been such a consistent part of your platform?

The films and TV work I've done, you would know that I've not based my career on my looks or being considered traditionally beautiful. So for me, business is not the normal way that usually works in Hollywood. I'm attracted to companies and brands who like that about me. I also just find that I don't know any other way, so it's easy for me to stick to that.

Even though Late Night and The Mindy Project were primarily comedies, they touch on a lot of topical, political themes. At the same time, there are horrible things happening in terms of women's rights or the president being accused of rape. How do you stay inspired to make work that is positive, but still challenges the status quo?

I found that no matter what your political beliefs are, nobody wants to go see a movie or TV show to be lectured, where someone's political statements seem like they're being pushed down your throat. When I work, I want to create something that is really authentic and that is true in my experience or true to the experience of the character that I am working with; and often that can be political. Because I am an Indian woman over the age of 35 who is not traditionally beautiful, the work that I do is sometimes inherently political. So, for me, I want to entertain. I want people to relate to characters, but I don't work with an activist hat on. I don't create things from that position because I don't think it is very productive for me to get people to try to change their minds. I also am a comedian.

Cancel culture is huge right now. Do you feel some sort of added pressure to highlight certain things or just make your work more political?

I'm reading more into cancel culture, but I don't let my fears of social media backlash dictate the way I create art.

You are a new mom, do you feel like there are parts of the experience nobody talks about or was a big surprise to you?

There are the challenges of motherhood and there are the challenges of single motherhood. So, I am doing both of the things. They are so intricately linked to each other. To me, I'm raising my daughter by myself and I had an incredible experience. I wouldn't exchange any of it, but it's a ton of work. And, I have privileges that certain single mothers who work do not in this country, but I still take a lot of the same strains, wishing I could be in two places at once. I find that very challenging — to be the breadwinner of the house and to be a presence for [my daughter]. I'm just figuring it out, to be honest. That's what my life has been like for the past year and a half since she has been born.

How are you balancing your work with all of it?

Three months after she was born, I shot the movie Late Night in New York and took her with me to shoot that, and I shot Four Weddings and Funeral while she was a little baby. She moved to London with me so I could shoot that there. Work just continued and I just decided that she's portable.

She'd gone along with us and doesn't protest. This is my life now. We go everywhere as a unit together. To that said to answer your question, I do think that ..."Do I wish there were more day?" Yes. "Do I wish the weekends were three days?" Of course. Everyone thinks that if you have kids or don't have kids. For me, especially it would be great to have more time with her.

Are you working on something currently?

I'm writing a movie right now for Priyanka Chopra and me to star in. That would take place in India, and it's a comedy. I also have some essays in the works for Amazon.