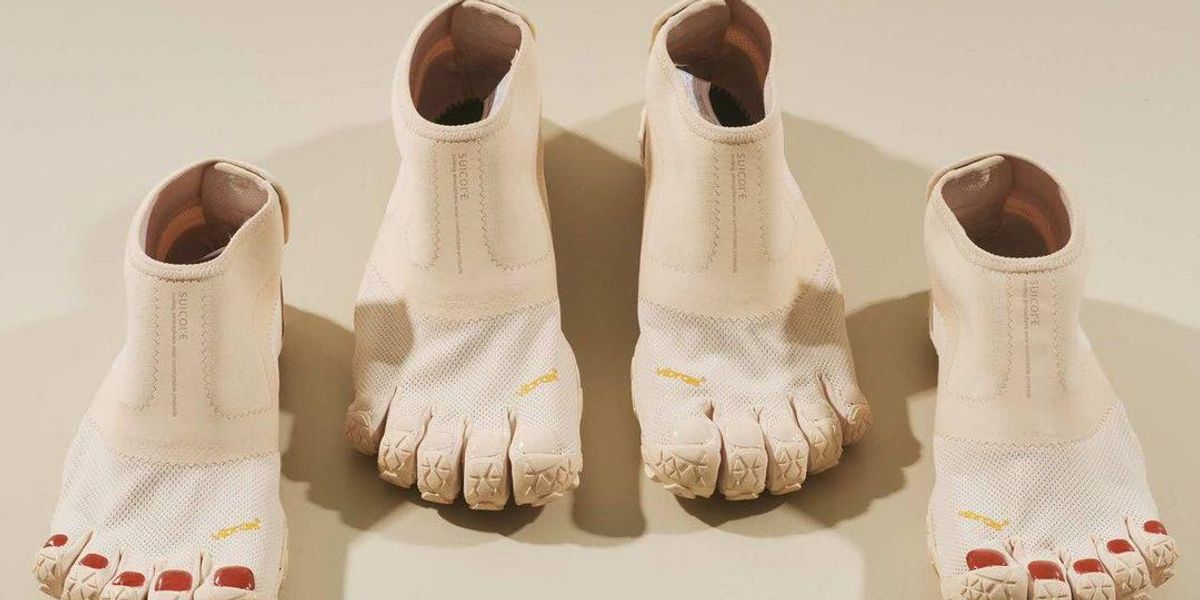 We're known to be fairly forgiving when it comes to questionable fashion. We've gone so far as to celebrate, even champion, some of the more outlandish or decidedly "ugly" creations that have cropped up in recent years. We've defended Crocs as being actually cool, made excuses for Virgil's architecture school presentation model masquerading as a jacket and overlooked the fashion sacrilege of cutting up a Birkin bag to make a pair of Birkenstocks but there comes a time when a line in the sand needs to be drawn.

Currently a semi-finalist for this year's LVMH prize, Japanese label, Midorikawa, has unveiled their upcoming footwear collaboration with Suicoke and Vibram from their Fall 2021 collection and it's definitely... a choice. Off the bat, Midorikawa put their spin on Vibram's polarizing FiveFinger model that flies in the face of conventional footwear wisdom by accentuating each individual toe, broadcasting to the world that if it were not for the laws of this land, you would run barefoot through the streets. On top of that, Midorikawa has chosen to give each separately housed digit its own lacquered toenail, painted in either a rich bright red or a slightly more subtle white.

Adding to the uncanny foot valley illusion, the hi-top sneaker is set to come in three flesh-toned colorways; Snow, Ivory and Mocha. You would likely have to stand a considerable distance away (which you may just want to do anyway if you happened to come across these in the wild) and squint really hard in order to have any chance of mistaking these things for actual feet but something tells us that wasn't necessarily what Midorikawa was going for. Sure, pre-painted nail socks are technically a thing that exists but that doesn't mean they need to be allowed out in polite society.

A perverse mix of cursed and camp aided by a minimalist silhouette and a cheeky nod towards realism, there is something viscerally unnerving about the combination of elements and it's hard to believe that Midorikawa, Suicoke, Vibram and anyone else involved don't fully well know exactly what they are doing here. It isn't even the first time either. Balenciaga tried a similar stunt last year with their own Vibram FiveFinger collab, combining the toed-sole with their own sock-shoe silhouette in both flat foot and high heel varieties. Luckily, Denma didn't get away with it but clearly that hasn't deterred other from trying to play footsie with high fashion.

Midorikawa and Suicoke's Vibram FiveFinger collab is set to hit shelves towards the end of the summer but until then, they are on thin ice. Very thin ice!