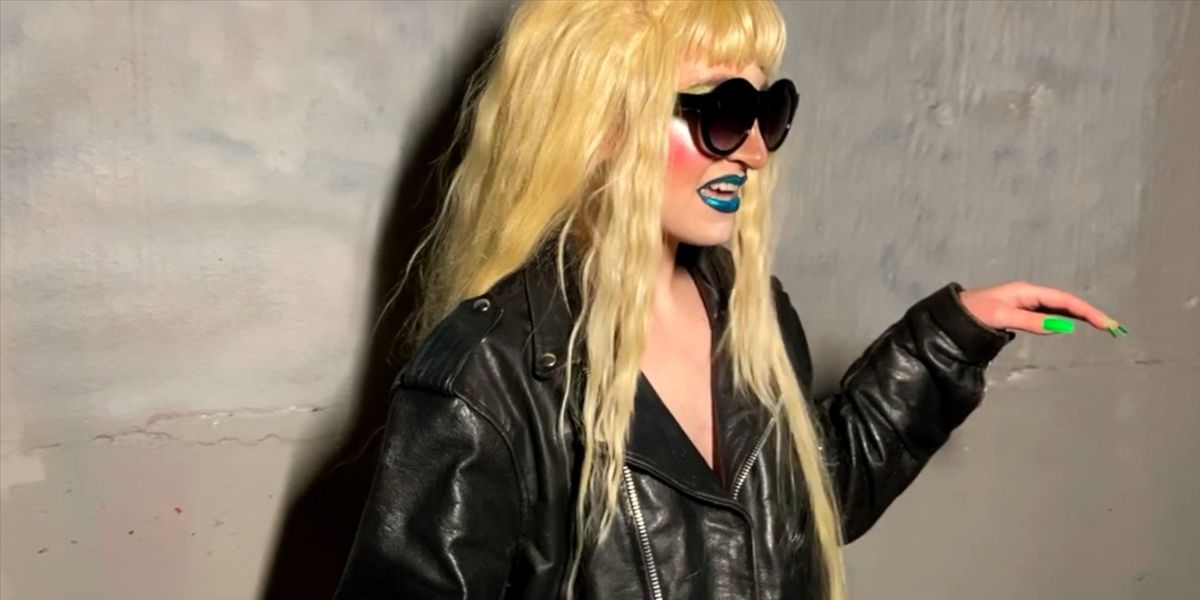 Michete just released the biggest single of her career. "Back of the Truck," which dropped October 28, quickly ignited gay Twitter and resonated with her audience through the track's simple, effective hook: "Acting like a slut, looking like a bitch" — a mission statement of sorts that the underground pop star repeats over and over on top of a grimy electronic beat.

Related | The Musicians Behind 'Bump This' Talk Titties and Tequila

Of course, Michete has been creating music for quite some time, including previous collaborations with artists like Shamir and Michael Medrano. But there's something about "Back of the Truck" that really lands. The Seattle-based musician saw the highest 24-hour streams in her entire discography and positioned the whole release as a "comeback."

In the music video, directed by Michete alongside Stephen Anunson, she's shown posing like a statue in only a leather jacket, sunglasses and panties, as wind gently blows her long blonde hair. When the "Back of the Truck" beat breaks, only then does Michete begin moving wildly in flashing neon spotlights.

The end of "Back of the Truck" is an absolute climax, with Michete warning that she's not like the other girls. "Tittes out, leather jacket, I'm causing such a racket/ Walk like a bitch, but I talk like a faggot," Michete declares, before doing whippets and dropping it on the bed of a pickup truck in a Lady Gaga Born This Way cut-off tee. "I look like something that you wanna fuck," she repeats.

Below, PAPER caught up with Michete to talk about all things "Back of the Truck," and how this signals a return to more club-centric music in the future. "I'm a nightlife girl," she says. "I belong in the clubs and I should be making dance music for faggots."

How'd you come up with this hook? So simple, so relatable.

First of all, thank you. The "slut/bitch" hook came to me when I was doing a show a year and a half ago here in Seattle. Gia Gunn was headlining. I had eaten a couple of edibles before getting to the venue (standard practice for me) and I was high as fuck backstage getting in drag. I was looking in the mirror and I took a video of myself and I just started saying it. "Acting like a slut, looking like a bitch, acting like a slut while I'm looking like a bitch." I think it's just how I felt in that moment but I also immediately knew that I would eventually use it in a song. I knew it was genius.

Who produced this? What was the actual song-making process like?

The song was produced by my friend Todd, who does music under the name Yufi, and myself. On all my old mixtapes, I always produced everything 100% on my own. I've never worked with producers on my music. This time around, I wanted to challenge myself to let other people in on the process. I wanted to take my own ego out of it because I never really set out to be a producer in the first place. It's not as if I pride myself on being an excellent producer or anything. I think I'm okay at it, but if I can bring someone on who I think is great at it, then why not?

So I started working with Yufi on a whim a couple months ago. We've been friends for years, but never collaborated until now. I was pretty blown away by how immediately I felt a creative connection with him and how easy it was to work with him. We really get each other and we have this incredible synergy when it comes to figuring out what my music should sound like. I've never felt this comfortable collaborating with another person in my life. I've never trusted another person to play such an integral role in Michete's musical output. So the relationship we have is really special. We both listen to each other and are willing to trust each other's ideas, and we ultimately both just wanted the song to be as good as it could be.

Are you surprised by the reception? Why do you think this resonates so much?

I am! I knew it was really good. Like, when we finished the song, I knew it was a great Michete song and a great comeback. And when I got the final edit of the video, I was like, okay, this is kind of huge. Like, this is a fucking serve. But I figured it was something that my friends and my existing fans and supporters would really like. I didn't think it would immediately began spreading so quickly in such an organic way. I can't believe the amount of people who are discovering me now and who are loving the song. ["Back of the Truck"] completely blows my other songs out of the water. I've never had a song get so many streams or views in the first day. Not even close. The fact that it's all happening completely through word of mouth is really cool to me.

Who'd you work on the video with and what was that production process like?

I worked with my friend Stephen Anunson, who is a videographer and photographer here in Seattle. He's a friend I've worked with before, he directed the "Stupid Girl" video. It was a really quick shoot. I knew exactly what I wanted the video to be, I knew what I wanted every shot to look like. I had it all planned out from start to finish and I knew how I wanted the video to progress. We shot it on a Friday and I had the final edit by Sunday, and then we released the song on Tuesday night. It was honestly a very quick and easy process, which Stephen credits to my vision being so strong and specific. It was cold as fuck though and super windy. It was raining for a lot of the shoot, too.

Is this signaling the direction of your new material?

Absolutely. I stepped away from making music for a solid three years, and in the meantime, I started doing drag here in Seattle and going to clubs and partying with faggots all the time. I realized somewhere along the line that Michete is supposed to be a club artist. I'm a nightlife girl. I belong in the clubs and I should be making dance music for faggots. So people can definitely expect more of this club-centric material.

I'm glad lots of people are streaming and saying it's "relatable" and that it's resonating with people but do know… https://t.co/pFDi6fJTeH
— Michete (@Michete)1604010319.0

(but also the fact that a song like this is resonating with a larger audience of people who aren't trans women and… https://t.co/i0B4YWNIQd
— Michete (@Michete)1604010689.0

Why is the success of this song so significant to you and your journey as an artist?

It means a lot to me because, for one, it's been so long. Like I said, my last solo release was three years ago. In that time I've changed so much: Started doing drag, started HRT, got Facial Feminization Surgery and just kind of grew a lot mentally. It feels like I'm making my proper comeback to music as a fully formed woman and a fully formed artist. To be welcomed back so warmly and with such enthusiasm by so many people really does feel amazing. I also feel like I'm finally getting the recognition I deserve from all these young "hyperpop" kids on Twitter. That whole scene kind of developed right after I stepped away from music. For the past couple years I've kind of been like, "What the fuck?" Cause I was calling myself an "underground pop star" before any of these kids were doing it. I'm not mad about it though. I'm getting my recognition and people are being very supportive. It's all just really cool. I feel great.

I'm doing my best. There's always Grindr, but the options there tend to leave a lot to be desired. I have one main designated quarantine fuck buddy who's pretty much been taking care of my needs. I get tested for COVID every single week and I'm always completely transparent with my partners about where I've been, how many people I've seen. I think it's more important than ever to know your status — in multiple forms — and to be honest and communicate with the people we're fucking. But if you can't get slutty IRL, you can always just post your titties on Twitter. I do it often and it's a thrill.

Keep streaming Michete's "Back of the Truck," below.