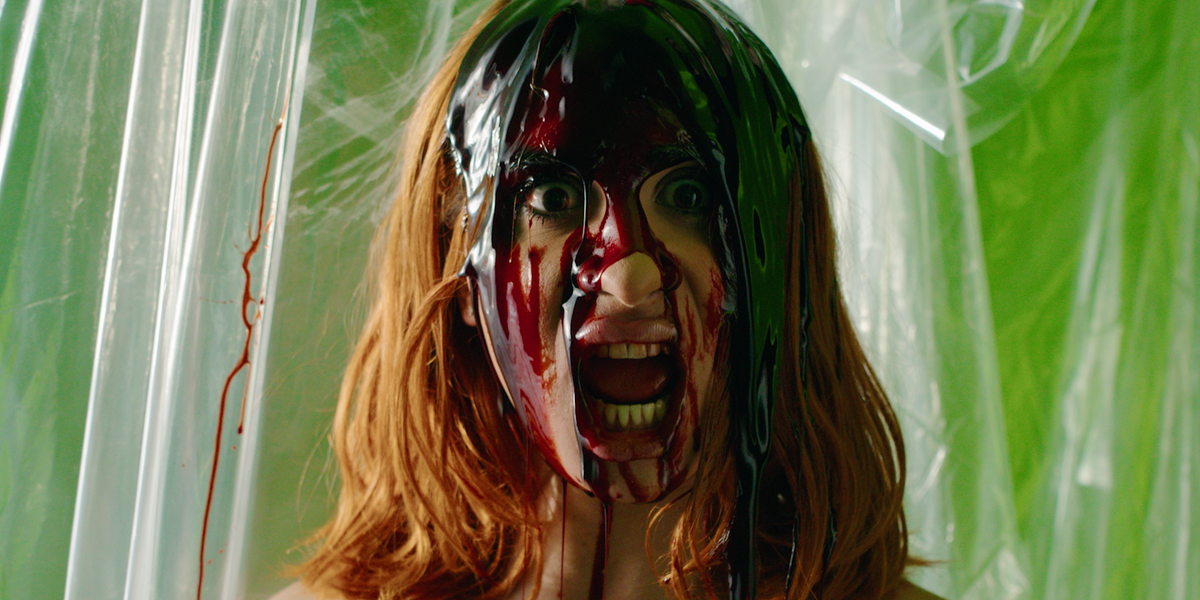 Searching for "big tits to match her ass," Mel Incarnate's debut single, "Big Tits," is a hyperpop banger exploring body dysphoria, wanting "her body to match her mind," suicidal ideation, and a release of emotion and celebration.

The music video pays homage to the monsters and victims in horror films. "I was programmed to think of my transness as evil or horrifying in my earlier life," Incarnate tells PAPER. "In this video I wanted to process those feelings through iconic horror movie tropes. It's about the acceptance of fear."

Incarnate is set to take the 10th annual Bushwig stage this Saturday night, September 11th. She has had a string of sold-out solo shows across New York this summer and her debut EP, Tranic Attack, is set for release this fall.

Below, she breaks down every horror film reference in her debut music video, "Big Tits," directed by Michael Sutphin.

First we have Miss Casey Becker from Scream. She's the iconic first victim of Ghost Face, the first death in the series that we as viewers get to see, and she's also: Drew Barrymore. I wanted to start the music video, just like I did the song, by emphasizing my feelings as a victim. I have often felt like "I don't deserve this" when life gets shitty, and in this particular case: body dysphoria. Kinda like, "Why is this happening to me? I don't wanna die!" Cursing God for all they have done. When I started to come to terms with my transness, it was very painful and scary.

Next we have my girlie Carrie, specifically, Sissy Spacek's version. Another infamous victim; she was tormented, abused and bullied. Throughout my gender breakthroughs I often relived the trauma of first coming out as gay, growing up in Alabama. The thought of coming out again was terrifying. I thought it would be a Carrie moment for me. I fantasized about public shame and ostracization and fixated on those aspects of transness. But the thing about Carrie I love is that she is one victim that gets her revenge.

In the first chorus and throughout the video, we meet Samara from The Ring. The #1 demon baby girlfriend. This bitch scared me so much when I was younger. I've been obsessed with her ever since. Samara is important to me because she was betrayed by her mother, the person she believed to be her biggest ally. Her mother saw something in her that was different, so she murdered Samara. Through my parental abuse, Samara became this image I identified with throughout my adolescent years and into adulthood. She gets her revenge and doesn't stop until she is loved. In the video, I wanted to give her some personality. I imagined my version of Samara would be like, if this dead little girl was also a "Barb."

Next we have Marietta Fortune, Diane Ladd's character from David Lynch's Wild at Heart. She is the typical overbearing mother, something I have experienced to say the least. She tries her hardest to keep her daughter from following her heart. So much so, that all of her efforts to control her daughter end up causing her mental demise, sending her into psychosis (she rubs lipstick all over her face). This is kind of a message to my own mother, who I've lost contact with. Her control pushed me away, which was her biggest fear. This segment of the video highlights what happens when you try to control someone's life. For me and my transness, and my mom with me, the harder we try and fight to control something, the more unmanageable it becomes.

Lastly, we have the reason why most people watched The Texas Chainsaw Massacre (2003), a Jessica Biel homage. She's the survivor. She's the ultimate final girl. Through all the horror and chaos, she lives. Beaten and bloody, surviving her monster, she escapes. It's a spell I cast for myself. To survive against odds and have amazing tits while I do it.