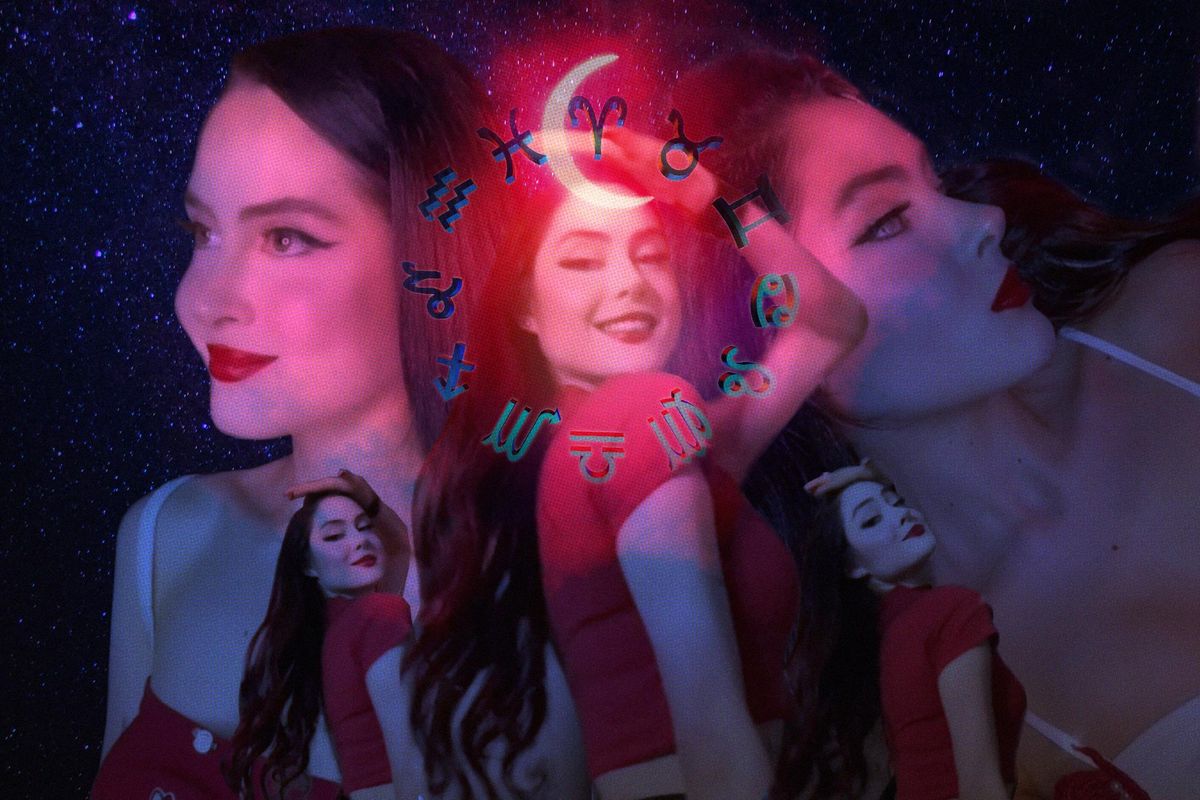 It would be an understatement to say that there was a glut of political commentary and analysis in the lead-up to the 2020 election. And though most of this came from expected sources like pundits and pollsters, Maren Altman also ended up surprising the internet with her eerily on-point predictions about everything from Amy Coney-Barrett's confirmation to the outcome of the election, and naturally became one of TikTok's favorite new astrologers in the process.

Ahead of the election, the 22-year-old gained substantial online traction after her video — in which she predicted president-elect Joe Biden's win — was retweeted by everyone from conservative commentator Ben Shapiro to senators like Hawaii's Brian Schatz.

"It got absolutely insane from October onward," Altman said, before mentioning another viral TikTok she did about Trump's health issues resurfacing around the election.

"And then he gets COVID, so that blew up," she recalled. "All my political videos just started blowing up because people would call them crazy. And then I did a recap where [I talked about how all my predictions] happened, and that blew up."

Granted, Altman has been giving TikTok scarily accurate forecasts about everything from earthquakes to political events for the better part of the past year. As someone who was drawn to astrology from "very early on," Altman's ability to provide in-depth yet accessible analysis on anything from charts to planetary movements is based on several mentorships with established practitioners in the field and years of studying different schools of astrology "non-stop throughout [her] entire adolescence."

Now though, her preferred method is more academically geared with an emphasis on astrology's historical and philosophical links — something she says dovetails nicely with her current pursuit of a Ph.D. in Philosophy, Cosmology, and Consciousness at the California Institute of Integral Studies.

According to Altman though, she's also garnered a fair amount of hate thanks to her appearance and ability to present her findings in an articulate, informed way. And while she acknowledges that a lot of this stems from mainstream misperceptions of astrology as an "invalid," entertainment-based practice, much of her online experience thus far has been colored by online pushback and trolling.

As the astrologer explained, she finally joined the platform back in April after finding herself with a lot more free time thanks to the pandemic. And though she'd been posting her full-length astrology videos to YouTube since late 2018, Altman ended up going viral on TikTok almost immediately thanks to a joke video about why she hated each zodiac sign — though the reception was overwhelmingly negative.

But even despite pushing through the backlash, her account continued to attract a near-constant stream of hate, which she believes led to a permanent shadowban on her content and spurred her to create a brand new TikTok with a slightly different bent in September.

Obviously, Altman's decision to start posting about politics alongside her more lighthearted content is what has since propelled her to TikTok fame. However, she also said her recent rise to visibility has been one of the most "cognitively and energetically draining" experiences of her life, especially after her election videos made it to conservative TikTok.

"It's been the biggest exposure therapy of my life, because I thought I was this really strong put-together person," she said. "But when checking your notifications means having to see Republicans and conservative teenagers non-stop dueting you, thinking that they're proving a point, [it's a lot]."

And even though she's had to hire people to manage her accounts after receiving numerous death threats, Altman said she isn't going anywhere any time soon. In fact, she's planning on making herself even more visible in the coming year by developing new products, continuing to teach her astrology courses and, of course, making more videos.

After all, amidst the shitshow that's been 2020, she's seen a huge uptick in people coming to her with questions about astrology and seeking guidance. And that even includes former skeptics who say they've been surprised by the accuracy of her videos.

"A lot of people hit their rock bottom this year in a lot of ways and people don't generally find astrology if they're like, 'My life is so great, so let me try to investigate every cycle in every event.' People get into it because they're either confused about themselves or they're going through something, and it seems that the archetypes and alignments resonate. And during this time there's a lot of free time and a lot of soul searching online," Altman explained, adding that the upheaval caused by 2020 has led many to question "how and why the world is the way it is," which is yet another reason why studying the cycles present in astrology can be so useful.

"It's about having an awareness of the structure of reality [and of] living inside that structure," she continued. "Astrology itself is not a sun sign horoscope in a newspaper column. That's like comparing a Fisher Price toy car to a Tesla. They're not the same. One is a prototype toy. The actual study is incredibly useful for understanding, and having more insight into the structure of reality and how that repeats itself."

Given the challenges of 2020, what's on deck for the next couple of years? Thankfully, Altman said things seem like they'll be getting a bit better — though it'll be a gradual upswing that stretches over the next few years. We're also apparently on the brink of entering a new era in politics and society. And it's also something that coincides with what she believes will be the rise of Vice President-Elect Kamala Harris.

"I think the fact that she has a decade-long peak period of importance that literally starts this December [says a lot]," Altman shared. "It would be difficult for me to believe that a vice presidency that lasts 4 years would be definitive of the duration of a 10-year peak period. I wouldn't be surprised if she runs after this and does get elected just because of how incredibly prominent it is for her."

Altman has supported this theory with a prediction — one that was initially presented by astrologer AstroDim — that Biden's life could be at risk during his presidency, pointing out "a pattern of an astrological correlation every 20 years." According to Altman, every time Jupiter and Saturn have met throughout history, a president has "either died or had an assassination attempt," from Abraham Lincoln to John F. Kennedy.

with harris’s impressive upcoming astrology, this lines up on other levels too. #astrology #2020election #HomeCooked #GiftOfGame

However, before we potentially get to that point, there's still one big astrological hurdle remaining this year and it's coming in the form of a solar eclipse on December 14 — which also happens to be the day the electoral college meets.

"Solar eclipses are collective new beginnings that last over six months," she said. "They tend to be really large world events, and this particular eclipse is falling in a certain way that activates both the United States's chart and Trump's chart to a degree that I've been looking at for months. Trump was born under basically the same eclipse cycle it's exact by degree."

But what exactly does that mean? "Basically, it looks like Trump is going to be acting out in a way that is just unbelievably publicity stunt ridiculousness," Altman concluded. "It definitely looks like there will be a new cycle to political trends based on this and it's the literal finale to 2020. This eclipse basically just looks insane. It looks beyond dramatic."