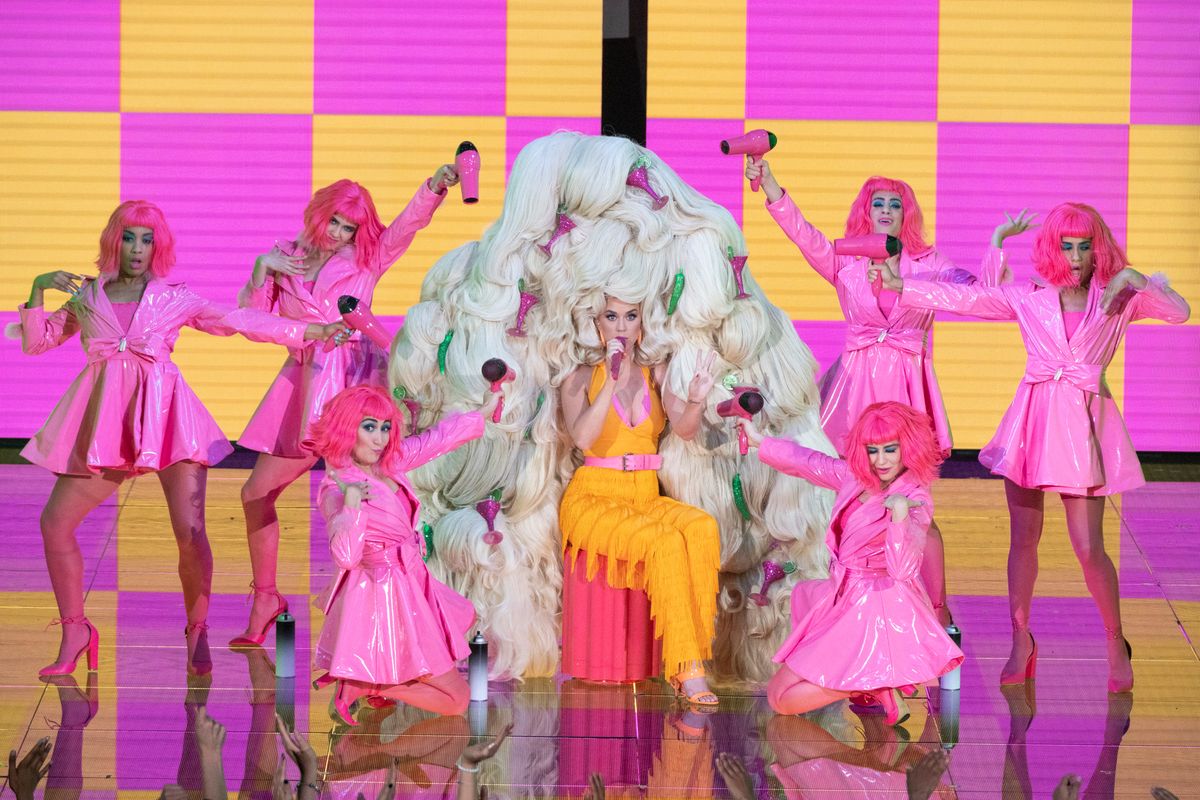 Katy Perry doesn't shy away from extravagance, most conspicuous in her ultra-giant and glamorous wigs as the reigning judge on the recently concluded season of American Idol.

From platinum blonde pixies to wavy neon wigs, the singer's hair became a hot topic of discussion and while much credit goes to hairstylist Chris Appleton, another relatively newer and younger artist was responsible for the iconic blonde 5'5" wig for Daddy Yankee's "Con Calma" performance that had fans raving: Iggy Rosales.

Related I Katy Perry: Outside the Box

Interestingly, the idea came from singer Diana Ross' original and iconic hairdo, Rosales tells PAPER. "Neon, glam, blonde, surreal — something to make the original queen Diana Ross proud," he says. "With something of this scale, it becomes less of a hairstyle and more of a sculpture. The idea was that Katy would start off completely submerged within the giant wig, and mid-performance would reveal another hairstyle underneath created by Chris Appleton."

But the LA-based hairstylist, who also works with the likes of Kim Petras, wasn't alone in formulating the dramatic look. Perry herself had a huge part to play and had final say in what it would ultimately look like. "I always admire artists with a strong sense of identity and Katy is across all of the creative," he says. "She has final say on every small detail that is approved and I think it's a testament to her success."

In talking with PAPER, Iggy Rosales reveals the inspiration behind the look and gives us a step by step breakdown of what went into it.

I was in New York on another job when I received a message from the creative directors at The Squared Division about the monster wig to end all wigs. Obviously I freaked out! I had previously created renaissance wigs for Katy Perry's "Hey Hey Hey" music video, but this was the first time that something I created would be worn specifically by her. When I was told the wig needed to be 5'5" tall and 6' wide and that I had 5 days to make it, well, at that point my freak out evolved into high anxiety — but in the best possible way.

What is the inspiration behind the look you created for Katy?

The Squared Division developed the concept of incorporating a giant wig into Katy's performance, which seemed perfect having witnessed all of the "wig snatched" moments throughout the season. Neon, glam, blonde, surreal — something to make the original queen Diana Ross proud. With something of this scale, it becomes less of a hairstyle and more of a sculpture. The idea was that Katy would start off completely submerged within the giant wig, and mid-performance would reveal another hairstyle underneath created by Chris Appleton.

"The goal is to create something visible from space."

How involved is Katy in the process of creating the looks and coming up with new ideas?

I always admire artists with a strong sense of identity and Katy is across all of the creative. She has final say on every small detail that is approved and I think it's a testament to her success.

Do you have plans for more extravagant and bolder styles for the future?

I always want to push the limit, so I'm sure you will be seeing an even bigger or more sparkly wig coming to a theater near you. The goal is to create something visible from space.

How to Make a Giant Wig for Katy Perry: A Step-by-Step Guide

1. Begin by employing an army of assistants to immediately visit every wig shop in all of LA and start buying up all of the blonde wigs. Apologies to all the session stylists who couldn't find a blonde wig that day. Take it up with Katy.

2. Consult with sculpture artist Lisa Be and work with her on designing a structure to hold all of the wigs up. Structure can't be too heavy, so dancers can remove from stage. Structure must be flexible to ensure access to hair. Structure must seem simple in theory, but really complicated in real life.

4. Rediscover relationship with higher power as I realize I'm going to need some kind of supernatural miracle to make deadline (I only have 5 days).

5. Take a fun craft break to glitter all the martini glasses, limes and chili's. Pretend the paint is not staining your expensive wooden floors. My house looks like an episode of Dexter, wrapped in plastic, paint is everywhere. Mountains of hair. Does my cleaner thinks I'm a serial killer?

6. Continue styling big hair all night and day long until you don't even know what day it is anymore. Who is going to fall apart first? Me or the wig?

7. As show day arrives, spend every last second styling and adding accessories in the back of giant truck on the lead up to the final rehearsal! On stage the Wig looks amazing! The dancers pink bobs look fab and Thank God Baby Jesus Virgin Mary Buddha Muhammed and all other relevant deities when Katy Perry approves my design!

8. Giant wig gets transported to the stage for final run through before final taping with 15 minutes to spare — take one is a success then time to reset for second take in 60 seconds.

10. Figure out what to do with giant wig. Take photo with it. Caress it. Thank it. And ask respectfully to never see it again.