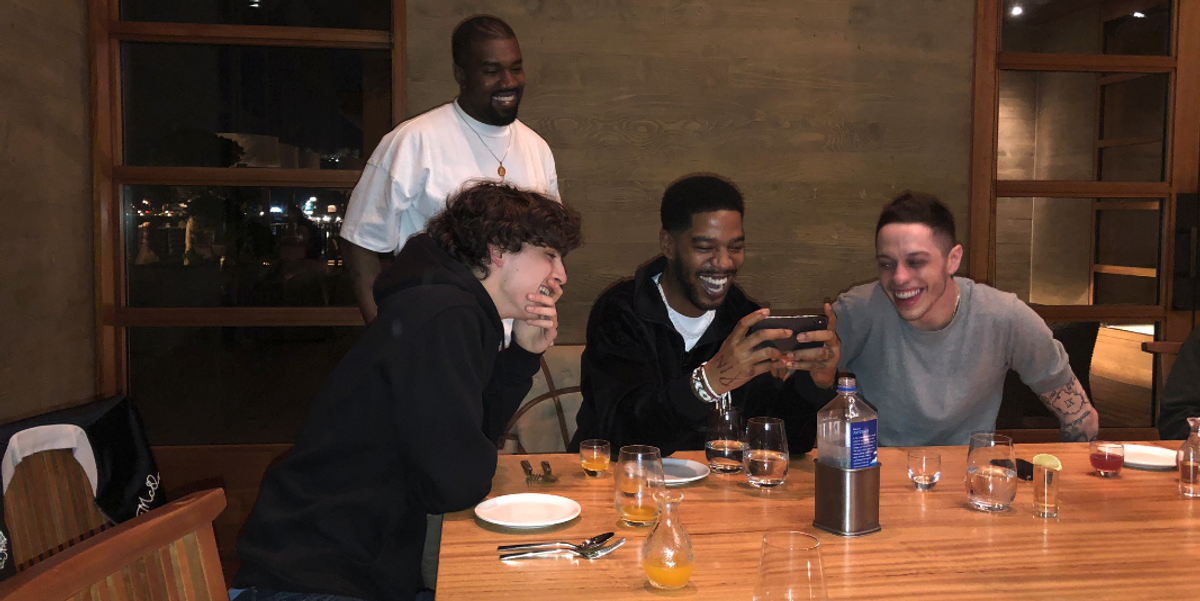 A group of extremely famous and talked-about men hung out last night and we are dutifully here to let you know, so that you may savor the novelty and charm of their camaraderie!

The men in question are rappers Kanye West and Kid Cudi, lab experiment actor Timothée Chalamet, and the most famous ex-boyfriend in the world, Pete Davidson.

Last night, Kim K tweeted a series of photo of the four dudes at a festive dinner that appears to have been Kid Cudi's 35th birthday party.

Wow! Oh! Just four extremely famous homies, chuckling about memes (which one!), sipping cocktails and Fiji water out of a custom holder (!) and munching on dessert sushi (?).

These four men's net fame, wealth and virality, all in one room, is almost too much to handle. But the image of Timothée throwing up deuces as Kim walked into the room and said, "boys, lean in for the pic, let's break the Internet!" is really what pushes us over the edge.

We're also obsessed with Kim's choice to post not just one or two photos, but three: including an innocuous blurry one in which Timothée's throwing back his drink, Kanye's scratching his face and Cudi's checking his phone. Guess Kim, being a connoisseur of fandom, realizes we're so thirsty for this group that a blurry BTS photo has its own viral appeal.

To be honest, the photos are so damn clicky that we couldn't help but wonder if this alleged "birthday party" was actually just a publicity stunt. If we take a closer look at the social network, however, the group reveals its logic as a star-crossed meeting of fanboys-turned-friends.

Obviously, Kanye and Kid Cudi go way back, long before Kids See Ghosts. But Pete and Timothée are actually two of Kid Cudi's biggest (and most famous) fans.

In 2016, Davidson said on The Breakfast Club that Cudi's music helped him through an intense depression: "He saved my life. I would've killed myself if I didn't have Kid Cudi... I truly believe if Man on the Moon didn't come out, I wouldn't be here." He also revealed that the pair were chatting around the time that Cudi went to rehab.

Davidson, um, isn't a Kanye fan. He famously trashed Kanye on SNL after Kanye performed and gave a pro-Trump speech on the show.

But it seems like Cudi helped them patch things up. Plus at this point, Kanye doesn't really have a choice whether or not to hang with people who've trashed him because that group includes most of his friends, fans and collaborators.

Timothée is also a noted Cudi worshipper. He revealed in his GQ profile that the pair once randomly met and spent a long intimate evening together in Montreal at a concert. But he was a fan long before that. According to PAPER night editor Matt Moen (who attended NYU with the actor and who we're now begging to write a memoir about this experience), Chalamet once gave an academic presentation on Kid Cudi in a class on self representation in contemporary art.

Well, that's a pretty iconic fan glow-up for Pete and Chalamet, but I guess becoming friends with your idols is just a part of being famous. Call us basic, but we're charmed.