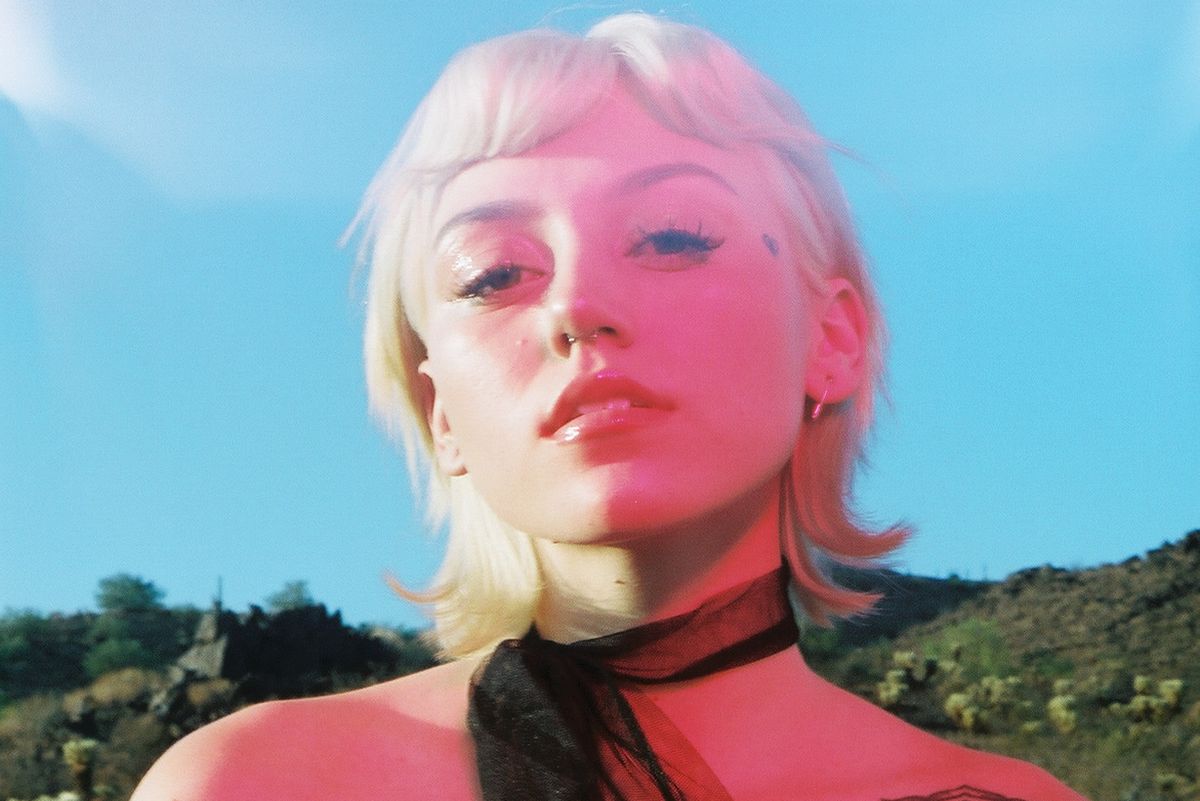 "I'm a headcase, fuckin' crazy/ I'm a heartbreak/ I warned you," 20-year-old indie pop-goth siren Kailee Morgue taunts with the defiance of a young Avril Lavigne or Hayley Williams on her new single "Headcase" over the nervy melody of The Pixies' "Where Is My Mind." But Hayley Kiyoko comes in on the next verse, her voice disarmingly vulnerable in contrast to Morgue's brittle tone. Kiyoko confesses: "I'm losing my grip right now/ Why aren't you here?/ Cause I need you right here right now/ I can't see clear/ My head is falling to my knees/ My heart is just falling to pieces, irrationally."

Building off the jittery paranoia of "Where is My Mind," "Headcase" boomerangs from gentle, moody synths on the verses, to a glitchy, explosive chorus full of emo-tinged melodrama. Morgue and Kiyoko's affecting duet feels like the push and pull of one mind, rather than two people singing to each other: one woman fielding both desire and fear, anger and self-loathing, euphoria and isolation.

Despite their obvious chemistry, the collaboration was the spontaneous result of a DM Kiyoko sent Morgue on Instagram after discovering her on a Spotify playlist. The Phoenix-based upstart, who's gained traction for dark emotional indie pop songs like "Siren" and collab with Quinn XCII "What The Hell Happened To Us," happened to have "Headcase," the first single off her upcoming EP, in the works. She asked Kiyoko if she'd be willing to lend her vocals, and the song, which Morgue wrote about working through volatile "feelings of love and fear in a relationship," just happened to speak to "exactly" Kiyoko was going through.

Both women know what it's like to feel out of control, and to ricochet between emotional extremes. Morgue was diagnosed with bipolar disorder in her teens, and Kiyoko has spoken about depressive periods of her career where she couldn't "go to the grocery store without having a panic attack." They also both know the silent imperative to disguise that kind of vulnerability, lest they be called "crazy." But on "Headcase" Morgue embraces and disarms the term, musically rolling her eyes at anyone who'd judge her, with the help of Kiyoko, demanding the space to feel whatever she needs.

PAPER sat down with both artists to chat about feeling like "headcases," Morgue's upcoming EP, and creating community among queer women in music.

Tell me the story of how you met.

HK: I was listening on Spotify and I came across Kailee and just loved her music. I was like "She's dope, she's going to be awesome in the music industry," so I slid into the DM's and told her she was doing awesome work. Soon after, she sent me the "Headcase" asking if I wanted to get on it. It's an amazing song, so I jumped on it.

KM: From my perspective, I was like "Holy shit, Hayley Kiyoko just followed me." I've always really loved her and what she represents. It was strangely perfect timing that I just had this single we were looking for a feature for. I sent it to her and it worked out perfectly.

What song was it?

KM: I want to say it was "Medusa"? I've had a couple artists besides Hayley who reached out to me after hearing from that song.

How did you feel when you got that DM from Hayley?

KM: I had been watching her from afar and hearing her music for years. So it was just insane timing that I had this single. Even before her reaching out I knew I wanted a female feature who was representative of the LGBTQ community. That kind of just came my way. It was clearly meant to be happening.

What do you admire about each other's work?

KM: Hayley makes these intriguing pop bops. It's the type of thing where you listen and are just addicted. I also really love visually what she's doing. I'm always looking to see what other strong female solo artists are doing, because I think there's a lot who are really bold and doing unique things right now. That's what I saw in Hayley.

HK: I rarely listen to a playlist and have a song play that captures me like Kailee's did, where I keep listening and then look into the artist. Kailee has such strong melodies and I'm always very attracted to artists with strong hooks and melodies, so that's what made me interested in her.

Kailee, tell me about creating "Headcase." What story were you trying to tell?

KM: So, the song samples The Pixies' "Where Is My Mind," and we wanted to pluck the feeling of that, and turn it into "Headcase," in which I'm talking about my own issues and how it applies to my relationships with people. I think that "Headcase" is about that extreme teetering back and forth — of feeling super happy and then super distant. I've been trying for a long time to express through a song. Using that sample really drew me to that feeling. Also I knew that having a feature would really capture that because I knew getting a perspective from two different people would show alternate feelings.

Hayley, is that something you related to?

HK: When Kailee sent me this song I really connected with it because I was in a dark place of figuring out my mental health and feeling crazy. I felt exactly like the song, I was going in and out of losing my mind. That's so relatable about the song, just feeling so crazy sometimes. Sometimes you make decisions that don't make any sense or react in a certain way and sometimes you feel like you can't control it. I feel like that's a relatable and normal feeling, that's why I connected to it.

Did you want to challenge or sort of reclaim the idea of a "crazy woman"?

KM: Yeah, I definitely didn't want it to be some kind of crazy girlfriend story. I wanted it to be about how one person can feel that craziness and how it applies to the other people in their life. It's It's about owning any mental issues or indecisiveness that others would view as crazy and being like "yeah that's what I feels like right now." There's not many situations where two queer women get to work together and represent that and own that narrative.

You sampled The Pixies, and the song sounds so emo pop-punk to me. Were you guys were into emo and pop-punk?

KM: I wasn't into old-school punk, what people consider punk isn't what I would listen to. But I definitely listened to pop-punk when I was in high school, walking down the halls listening to all these very spoken word-esq types of music where people are very emotional. With my new stuff that's kind of what it is, it's just very honest. The heart of this song is really honest. The Pixies and all of that is sonically where I pull from for most of my stuff.

HK: Kailee, do you feel like "Headcase" is a stand-alone single or that it represents what's coming in your new music?

KM: A bit of both, to be honest. I feel like I'm still in that stage where I'm figuring out exactly what I am sonically. "Headcase" I think is more of a standalone, because at the time we made it, it really embodied exactly what was going on in my life directly, whereas now I'm pulling from so many different things. My new music that's coming out is like that, but it's also just to the roots of my influences and what I've listened to growing up, like 80's alternative. So I think "Headcase" marks a new era of me drawing from those influences, but stands alone at the same time.

"It's important just in general to support other people that you believe in, big or small... I wouldn't be here without the support of the community that cheered me on."

Hayley, is collaborating with and bringing other queer artists like Kailee into your community something your intentionally seeking out?

HK: Totally. I think it's important just in general to support other people that you believe in, big or small. My journey has been from the bottom slowly rising and I wouldn't be here without the support of the community that cheered me on, so I try to do that as much as I can.

KM: It was very back and forth thing over the phone because we're both so busy. Hayley has been touring and doing her own thing, so I'm really grateful that she even had the time to do this, because I fell in love with the idea of having her on this. It mainly was just over the phone, going back and forth making sure that changes were correct, but it was still very involved.

"Headcase" is the first single off your new EP, can you tell us a little about it?

KM: "Headcase" is the first single off of a project, it's going to be an EP marking the new era. I think the old music is great and it has a place in my heart but the new music is definitely more of me. There's more of a radiating confidence and just a reassurance in me personally. I think the new music is showing exactly what I'm trying to say instead of feeling like I have to sugar coat things. "Headcase" is a huge step into that world, like "here I am!"