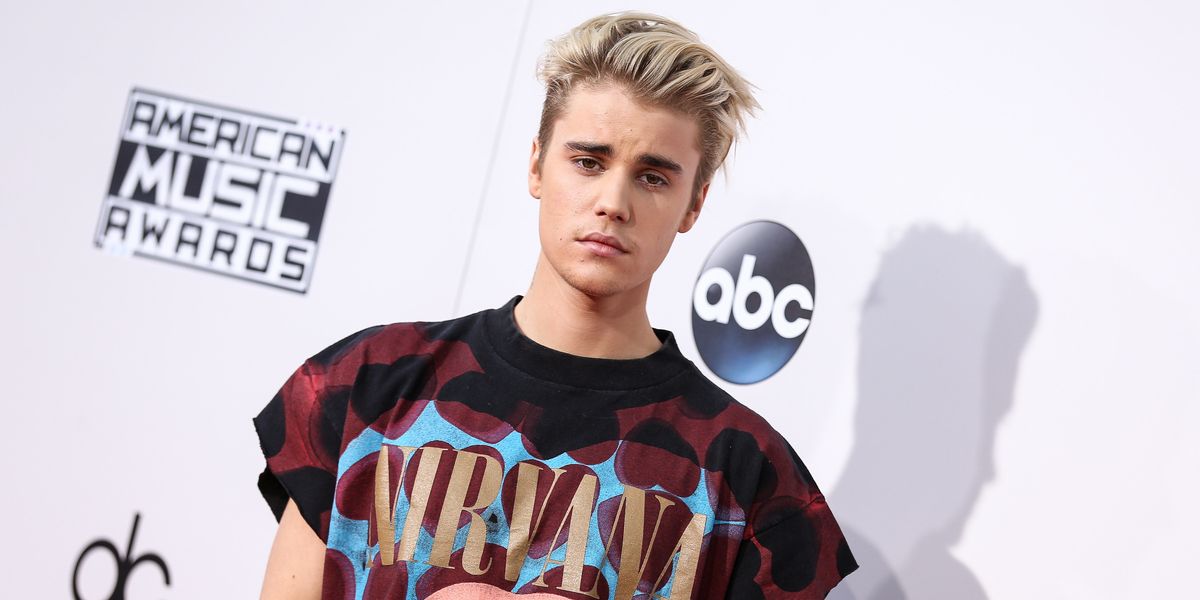 Justin Bieber has once again been spotted publicly weeping. Unbelievably, the scene of these most recent tears, was Universal Studios Harry Potter-themed Leaky Cauldron bar in Orlando, Florida, which the pair's security detail cleared out so that Bieber could weep and nurse a Butterbeer in peace.

All summer, my responses to his meltdowns have been a mix of violent eye-rolling and fairly visceral repulsion. Like why, dude? Just why? Why are you crying? Why are you crying in public? Why are you getting all snotty in a theme park bar? You have so many homes, condos and expensive vehicles in which to cry, and so many millions of dollars with which to acquire private spaces in which to cry. As an extremely rich person, it is fully within your power to never, ever have to breathe the same molecules of oxygen with other people who you don't know.

However, after contemplating this week's blurry shots of him, in his disheveled scumbro hoodie, with his greasy head in his hands, it occurred to me to ask: while Bieber may indeed appear to be whiny, gross and snotty, is he not also a martyr in the battle to normalize public displays of emotion?

Every Time Justin Bieber Has Broken Down Crying in Public Since Proposing to Hailey Baldwin https://t.co/dEGzwTFuvg https://t.co/Oj9OyxPFMc
— Seventeen (@Seventeen)1541176935.0

As someone who knows intimately that crying in public is a fundamental part of urban life, I have begun to feel a strange well of appreciation for the man-child and his antics. Because when you live in a place like New York City's proximity to millions of other human beings, there are times when retreating to a private space in order to cry is logistically impossible. There are also times when it's not only a matter of logistics, but when it actually feels redemptive to have your emotions witnessed, even by random and very uncomfortable strangers on the J train, and a less painful alternative to crying alone in your apartment or an Au Bon Pain bathroom. Maybe Biebs feels that too, and to cry in his mansions or within the soundproof, tinted interior of his chauffeured BMWs would just make him sadder.

The pop star of course, makes it impossible to stifle the laughter, by crying in such ludicrous situations, like on a romantic Citibike date and in theme park bars while drinking novelty cocktails, but there is something... well, not charming, but relatable about his inability to mask his emotions, and admirable about how he's become so unapologetic about his meltdowns.

When questioned by paparazzi in August after the Citibike incident, he didn't get angry or defend himself or deny it, but simply said: "You got good days, and you got bad days. It's not real if it doesn't have any bad days."

For one thing, we're asking "Biebs, y u cryin?" But we know why! Besides the stress of his quickie marriage (prenup included luckily) which seems to be causing him angst considering he recently flaunted a copy of a book called The Meaning of Marriage: Facing the Complexities of Commitment with the Wisdom of God, there were also the DUI's, lawsuits, arrests, and the substance use that his former manager Scooter Braun said recently, caused him at times to fear for Bieber's life. His ex-girlfriend Selena Gomez, who he may or may not be over (hence marital angst), was recently hospitalized. Not to mention, that he's a Christian, so he's got that whole extra layer of guilt and self-loathing about his debaucherous celebrity lifestyle.

Is Bieber not practicing radical vulnerability and breaking down toxic masculine norms of emotional repression by allowing himself to cry when he needs to? Is he not enduring public ridicule, so that one day, you and I might cry more comfortably on the J train? Is that a stretch? Maybe, but I've decided that I am here for Bieber and his public tears, no matter where he lets them flow.