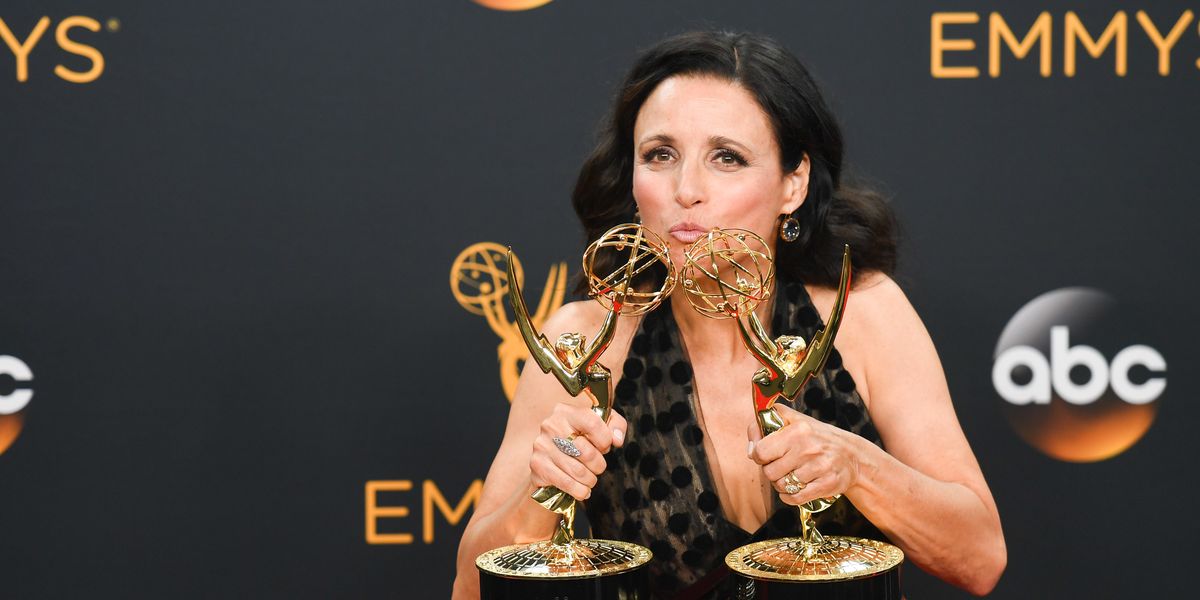 National treasure and queen of our hearts Julia Louis-Dreyfus has been awarded comedy's top prize, the Mark Twain Prize For American Humor — which we're told is a very big deal.

The Veep and Seinfeld star is only the sixth woman to ever take home the 20-year-old prize, joining the a power squad of Whoopi Goldberg (2001), Lily Tomlin (2003), Tina Fey (2010), Ellen DeGeneres (2012) and Carol Burnett (2013). Other recipients include David Letterman, Bill Murray, Eddie Murphy, Jay Leno, Will Ferrell, Billy Crystal, and formerly Bill Cosby, whose award was rescinded this year.

Larry David made the first cancer joke of the night while the Broad City girls spoke about how Louis-Dreyfus inspired them, and did a rendition of the "Elaine dance" in her honor.

"I gotta say, the lengths that she went to to get [the Mark Twain Prize], frankly I was a little surprised," David joked. "I mean, come on! That whole cancer thing? Cancer? Honestly, I gotta take my hat off to her. What a scam. It's diabolical. I'm a little jealous I didn't think of it, because that is right up my alley."

"Working with her was like being in charge of the Hope Diamond: I felt vastly protective and constantly in awe, a condition in which I still remain to this day," he added about working with her on Saturday Night Life. "Congratulations, Julia. I love you."

Louis-Dreyfus herself, always one to keep things topical and and dark, took cracks at Brett Kavanaugh, and nodded to her recent announcement on Kimmel that she is now breast cancer-free.

The comedian attended high school with Dr. Christine Blasey Ford, and was one of the alumni who signed a letter supporting her testimony.

"I attended Holton Arms, a girl's school in the Washington area that has been in the news lately. Back in fourth grade, I was in a Holton Arms production of a very serious play called Serendipity" she joked. "You know, it's funny with us Holton girls: I remember every detail of that play. I would swear to it under penalty of perjury. And yet, I don't remember who drove me to the show or who drove me home. I don't remember if Squi or Tobin were there, or if Bart wrote it on his weird wall calendar. So gosh, maybe it never happened."

"Cancer isn't at all funny, but a big part of dealing with it has been finding the funny moments," she said later in the night. "The only cliché about laughter being the best medicine is it turns out to be true. Which is good, because that's what our current administration is trying to replace Obamacare with."

An edited segment of the ceremony will be broadcast on PBS on November 19.