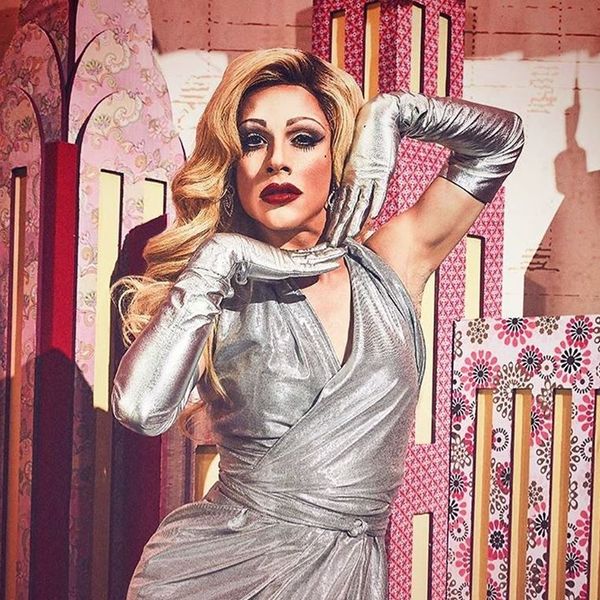 Stories about young people making it in New York are a dime a dozen, but The CW's Katy Keene is looking to offer a new kind of origin story, by remixing some familiar archetypes.There's the titular fashion designer (Pretty Little Liars' Lucy Hale), the aspiring singer/songwriter Josie (Ashleigh Murray playing an aged-up version of her character from Riverdale, of which Katy Keene is a spinoff), the social-climbing grifter (Julia Chan). There's even an aspiring theater star, but a very different one than audiences have seen before.

Jonny Beauchamp plays Jorge, a Broadway hopeful whose parents own the apartment he shares with the other main characters atop a bodega where he also works. But Jorge is also Ginger Lopez, a drag queen who can regularly be found at Molly's Crisis (a stand in for iconic West Village piano bar Marie's Crisis), performing songs like "Diamonds are Forever" and "Material Girl" to rapturous applause. But that same approval doesn't carry over to Jorge's theatrical ambitions.

Jorge and his fellow bright young things aren't exactly making it so much as making it up as they go along. "It's not necessarily a success story, but it's about the climb," Beauchamp explains. A New York City native who grew up in the Bronx and has had a string of captivating guest roles, Beauchamp knows a thing or two about that. while another show might have made Jorge/Ginger into just another compelling recurring character, Katy Keene places their story front and center with as much care and nuance as any of the other leads — maybe even more so.

In last week's episode, Jorge was blown off (and not in the good way) on Valentine's Day by his regular hookup, a closeted lawyer who couldn't find the courage to come see Ginger on stage. It was an experience that would resonate with many femme-presenting queer people, but one that wouldn't normally make it into such a mainstream TV show for fear that a middle American audience wouldn't get it. "The show handled it really well," says Beauchamp. "They presented it and they allowed Jorge to stand up for himself, and I think that was so strong. It was one of my favorite things to play.

Beauchamp has spent his entire career so far playing characters who fall outside of traditional conceptions of gender. On Showtime's excellent Victorian monster mashup Penny Dreadful, the actor played Angelique, a trans woman who catches the eye of Dorian Gray (yes, that Dorian Gray). He also played a character inspired by Sylvia Rivera in the much-maligned 2015 film Stonewall.

It wasn't necessarily that the actor set out to find roles that let him blur the lines of gender, but rather that they came to him — though he was warned not to take them. "People said that I would be pigeonholed and that I would ruin my career. And I said, 'How funny. I would ruin my career by playing one of the most amazing characters that ever been offered,'" he recalls, referring to Penny Dreadful. Thankfully, he didn't take the unsolicited advice.

As Ginger on Katy Keene, Beauchamp is pioneering something on modern TV: the story of a young drag queen trying to make it in showbusiness. WIth the mainstream success of Drag Race, drag is now a viable career option, so once Jorge realizes that he'd need to butch it up to get cast in a Hamilton knockoff — one he is encouraged to audition for by his mother, played by original Rent star Daphne Rubin-Vega — he channels his energy towards Ginger. "Drag queens are the next stage of rockstars," Beauchamp insists. "These girls are touring the world, selling out arenas. They are celebrities now worldwide."

On this show, an audience will see what it's like for an aspiring queen to try to make it, but not quite get there. "Ginger is not finished. Ginger is just starting." In conversations with the creative team, Beauchamp helped find the right balance of being "super fierce...but not ready to win Drag Race." If Ginger has anything, it's gumption. "We wanted her drag to get better and better and better as, as the season goes on, and that way we have somewhere to go and Ginger is growing."

Watching that journey play out on screen has been a gift for the actor, who is proud to pioneer a new kind of character on screen. "No one actually achieves everything that they set out to, but it's about the journey to get there. That's what a lot of people can identify with, and that's what people want to watch."