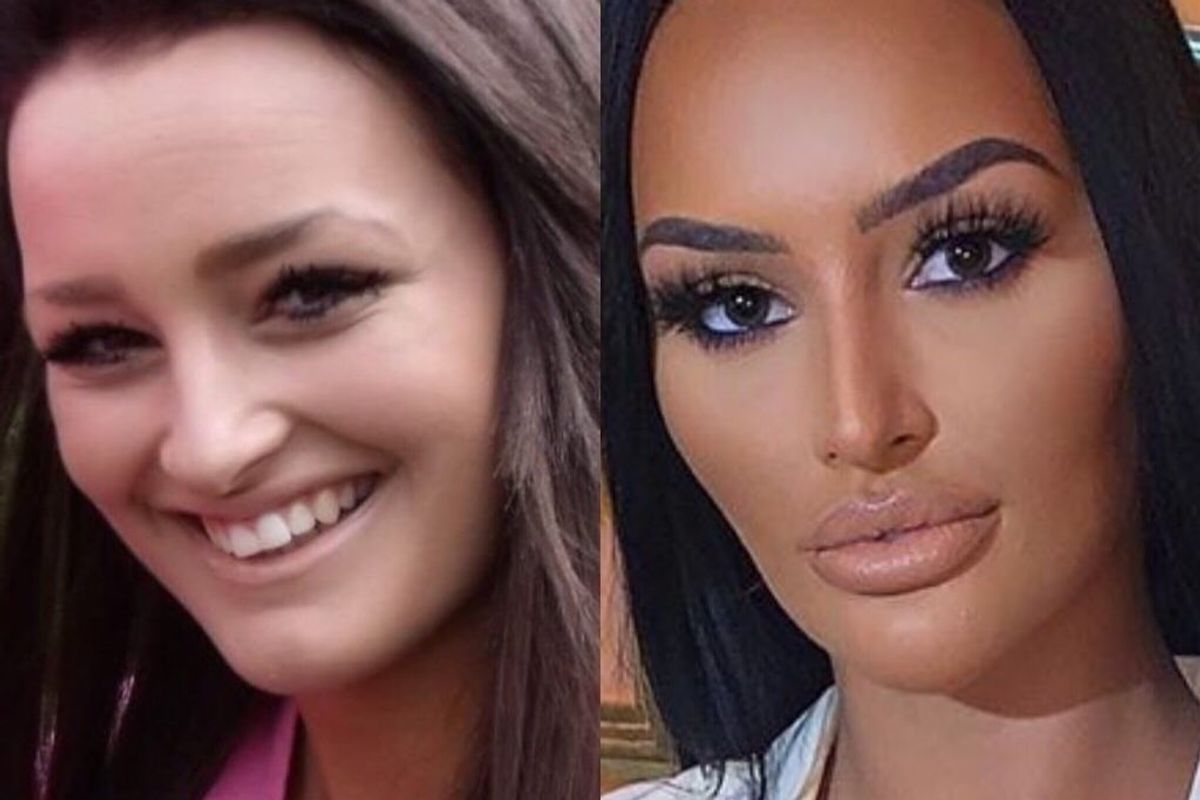 As Instagram becomes a more powerful force in our lives, its watchdog accounts become more vital. Where would we be without the likes of @diet_prada calling out fashion world bullshit, or @celebface zooming in on Getty Images and showing us the truth: that Jennifer Lawrence gets acne, too.

Run by 29-year-old New Yorker Diana, @s0cialmediavsreality is a watchdog not so much for celebs but influencers: the "everyday" people whose faces and bodies we see and compare ourselves to most, and also those statistically most likely to be digitally altering their shit, without anyone questioning them in the comments.

@s0cialmediavsreality isn't meant to be hateful, but it ends up being pretty confronting and brutal. You forget how warped your perspective is. Lips aren't meant to look like that. Waists are rarely so snatched without a little help from our friends at Adobe Photoshop. When did we forget what human bodies look like?

PAPER caught up with Diana over the phone to find out more about her popular account.

What led you to create @s0cialmediavsreality?

I created it because I suffered most of my life with an eating disorder – with body dysmorphia. It was terrible and thankfully I got over it. I'm 29 now, so I understand more now that I'm older. A lot of the young girls right now are scrolling through Instagram looking at these photoshopped celebrity influencers and they're trying to be like them and it really — I think it damages their self-esteem and makes them feel not good enough. And I just want to help people who are like me. I get tons of messages every day from girls suffering from body dysmorphia thanking me. So, the main goal is just to show that these people are not gods, they have acne they have wrinkles, cellulite — they're not perfect. No one is perfect.

Related | Here's How to Find Out If Someone Bought Their Followers

It's so crazy that we've become so attuned to seeing Photoshopped faces and bodies, that we even need this.

Yeah. I wish accounts like this existed when I was growing up, although we didn't really have Instagram at that time. When I was a teenager, we had fashion magazines and being super thin was in and looking like a model was the trend.

What's your process for finding the photos? You dig up some really good before and after shots.

I usually Google, and then I try to find a public Facebook account, especially for influencers who aren't super famous. I go down into their timelines and sometimes I actually find the photos of them from before their cosmetic procedures and realistic photos of them without Photoshop. And for celebrities I also just Google beach pictures from the paparazzi that they take, those are usually the realistic ones.

There's always a big difference difference between a posed bikini photo and a candid one.

Has any celebrity or influencer ever contacted you and asked you to take posts down?

Yeah they have. A lot of them have blocked me, like Khloe Kardashian, Cardi B, Kourtney Kardashian. I have a separate account where I just add all the people that blocked me. Someone recently contacted me saying she didn't get a nose job, that it's her real nose, but I feel like she did, I don't know.

That's the thing, it's sort of hard to know what's real. I would be more okay with celebrity plastic surgery if they were just honest about it.

That's true. Yeah, I agree. I'm not anti-surgery. If it really helps someone's self-esteem of course, do it, but if the celebrity does it, be open about it, don't let people think that this is natural — that they'll achieve this by working out or, this is just how they naturally are.

It really scares me that literally some of the richest, most beautiful people in the world who have access to the best workouts, the best products, still feel the need to alter themselves, whether that's digitally or physically.

Yeah and the new procedures everyone's getting are more painless and with no recovery time, you just go in and out and that's it. If you have legal consent from a parent you can actually get fillers in your face or get lip injections at sixteen now. It's crazy.

You get a lot of hate from just commenters, as well, which I find very interesting, fans and stans defending their faves. How does that make you feel?

Well it kind of angers me a little bit because I'm not trying to bash anyone, I'm just trying to show, no, this person is not ugly naturally, this is just how they look. It's not ugly — they think I'm calling them ugly or I'm bashing them or I'm making fun of them, and I'm not. I'm just showing, this is how the person looks in real life and that's it.

Why do you think people are so confronted?

I guess they're so desensitized by all of this. Some people just like to hate, like to troll, they just like to start drama, I think.

There are definitely meaner accounts than yours out there.

Yeah, I've seen them meaner. I didn't want to shame or hate on anyone. I just want to show younger people, especially teenagers, you know, Kylie has acne or Kendall has pimples and this is normal. It's not ugly, it's normal. Because they think it's like a flaw. Having a pimple is having a huge, terrible thing. A huge problem.

It's funny, even with celebrities, they'll sometimes pretend to be really honest about acne and stuff, and it's only ever to sell a product. And meanwhile they're Photoshopping their bodies.

Your account has a funny side, in that often you'll show just really bad Photoshop or Facetune mistakes that are just so obviously fake. What are some of the mistakes that you see repeatedly?

I have no idea what a leg is meant to look like anymore.

I just want people to know, your looks — young girls are obsessing about their looks. They think looks bring you happiness. They don't. I want to show that no one's perfect and don't focus on your looks. Just evolve like a human being, don't obsess.

Do you think that influencers are worse than bigger celebrities when it comes to Instagram Photoshop?

Yeah, they're much worse. I don't see actors or actresses actually Photoshopping their pictures on Instagram. They're just very normal. Jennifer Lawrence, she doesn't even have an Instagram account. Margot Robbie, she never Photoshops her pictures. These big celebrities don't do that. Only the Instagram models or Instagram influencers, I think because they live in this world of Instagram. You don't really see them outside of Instagram — their life is Instagram, so they can Photoshop.

It's so dark. It's also funny because many influencers pretend to really care about beauty or skincare, there's this message that if you just have the right skincare routine or you buy the right products, you can look hot. But what you learn from your account is it's literally always surgery or injections or editing apps.

Yeah, it's not the teas or the workouts that they do, which they claim sometimes that's why they're so thin.

You were saying you receive a lot of messages from people. What kind of things do they say?

"Thank you for your page," they say, "I love you," they even talk about their issues like, "I have body dysmorphia, I'm ugly, I want to get surgery," and I try to talk to them. I try to be like, "Go to a psychologist." I try to help them, talk to them, I know my words won't really help, but sometimes I just ask them to seek therapy. A lot of girls are really, really damaged, have serious dysmorphia, they are crying to me, writing these messages, the only thing I can suggest is therapy. It's a major issue.

If we just give up and assume that everyone's going to alter their photos in some way, what are the most common things you think people should avoid doing?

Their bodies. Their waists, making them super cinched in and super thin. I think it's really rare when humans have waists like that, I think it's just abnormal and it's really a bad example for people. Also the huge bottoms, overly sized hips and bottoms. People are creating super small, doll-like noses that don't even fit their face. It just looks really ridiculous. Yeah, that's pretty much it.

I have an Instagram, but I don't use it. I stopped.

For the same reasons?

I realized that everything people post is usually just like, the pictures all Photoshopped, or else they show photos only of when they're on vacation, it's this kind of fake world. I don't know, it's so damaging.