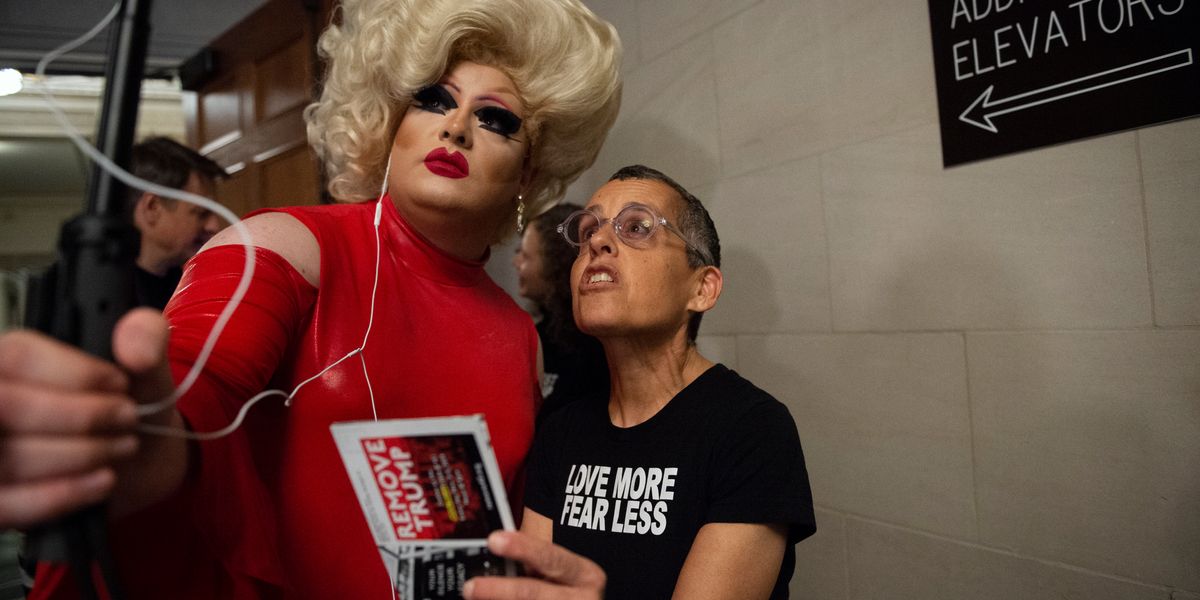 The Impeachment Drag Queen Is the Future Liberals Want

As President Trump impeachment hearings open up to the public, every buttoned-up pundit and politician has seemingly descended upon the Capitol to offer their take on the proceedings in what is already becoming one of 2019's biggest media spectacles. But amid the flurry of cable news crews and talking heads, a certain blond wig making its way through security caught our attention.

While reporters walked into the Congressional chambers today, more than a couple clocked New Jersey drag queen Pissi Myles strutting down the halls in a glittering red dress with shoulder cutouts. "Someone did ask me last night if there's anything in DC that surprises me anymore," tweeted NBC Reporter Heidi Pryzbyla, sharing a photo of the queen.

Just arrived for #ImpeachmentHearings Someone did ask me last night if there’s anything in DC that surprises me a… https://t.co/E7ZYXrbNBd
— Heidi Przybyla (@Heidi Przybyla)1573654363.0

"It's a crazy day in Washington! I'm flipping my wig over the high-energy proceedings today," Myles told NBC News. In addition to turning looks, she was there to report on the impeachment hearings for a new crowd-sourced news startup called Happs. "Tensions are high, and the bar for who's allowed in the Longworth House is very, very low," she said.

Naturally, Myles' presence at the hearing was a breath of fresh air and a welcome distraction for the internet.

"This is the closest I've ever been to a situation like this," said Myles, who typically can be seen performing in New York and on Fire Island or on the podcast My Gay Spooky Family. Appearing today on a Happs livestream, Myles added, "Being amidst all the buzz here, you can see in the comments everyone is so divided. It's the most polarizing political activity I've seen in a long time."