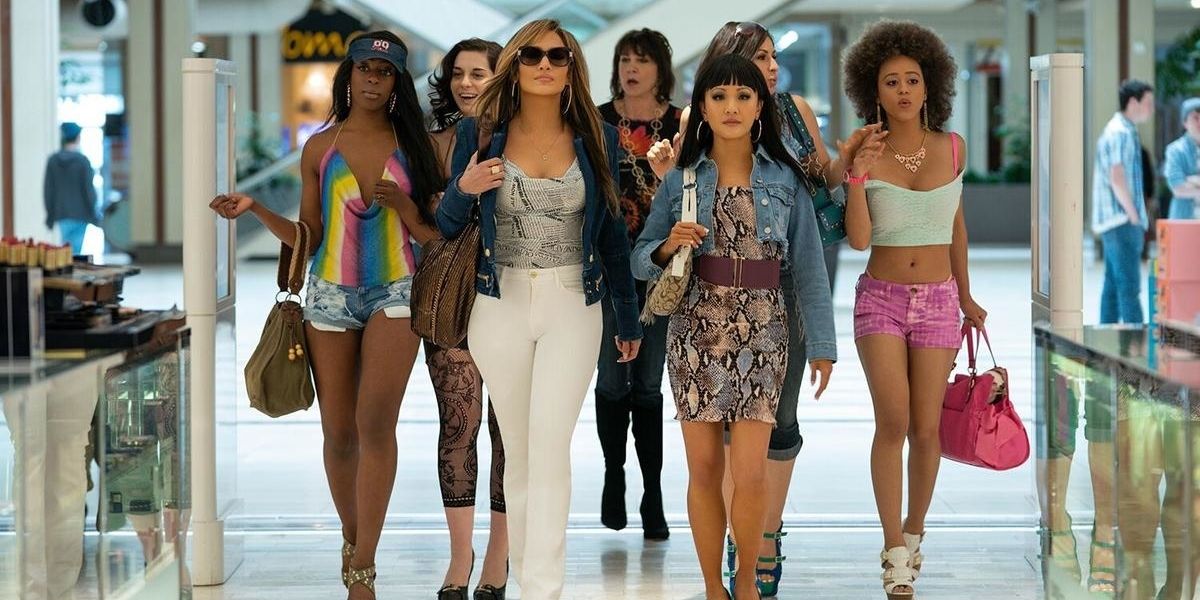 In one of the more poignant scenes in Hustlers, the stripper heist hit currently in theaters, Jennifer Lopez's character, Ramona, luxuriates on a freezing cold rooftop wrapped in fur with a cigarette in hand. She invites a shivering Destiny (Constance Wu) into her giant chinchilla coat, with the simple words, "Come into my fur." It's a moment so simultaneously filled with glamour and warmth that it has come to exemplify the film's balance of hijinks and deep female friendships. "It's a symbol of inviting someone into your life and them feeling like someone's got their back for the first time in a very long time," says Mitchell Travers, who masterminded Hustlers' style.

Travers is a costume designer whose list of recent gigs reads like a who's who of female fronted Hollywood, and includes Eighth Grade, Late Night and Ocean's 8, to name a few. Currently, he's prepping for the upcoming Tammy Fay Bakker biopic starring Jessica Chastain. "I like to really immerse myself in a culture or a group of people to try to understand as much if their experience as possible," he says of his process. For Hustlers, that meant late nights in the champagne room and days on Born Exotic, a traveling bus that sells handmade stage gear to dancers.

PAPER chatted with Travers about recreating the 2000s era of style, sourcing unique strip club pieces and creating characters through their clothes:

How did you get involved in Hustlers?

Hustlers came to me through [writer/director] Lorene Scafaria, who had seen some of my work. I had done Oceans 8 and she knew that she was going to be dealing with a largely female cast, and she wanted each character to have specificity. I read the script and became truly obsessed with these characters that she had created. I really responded to the fact that I was reading a story about women, and it wasn't about their relationship to their fathers, their brothers, their husbands or their exes. It was about women who are complicated, like all of my female friends are. I didn't even know who was cast, but I felt like I needed to be part of it.

Where did you start with the costumes?

I create a playlist for every job that I do, and for this, I was listening a lot to Britney Spears Blackout. I like to do that to immerse myself, get the images flowing and cover the walls in tear sheets and references to set a mood to come back to.

Ramona's look is very… J.Lo circa the '00s. Was that intentional?

Part of what makes the film visually enjoyable to me is Jennifer's relationship to it and to pop culture. The way that she sets trends now is the same way she was setting trends at the time when this movie was set in. We had a lot of conversations, like, "Can we reference Jen, if it's Jen?" I think not to do that would be to deny the impact she has had, so we just leaned into it.

How did you shape Ramona's look?

She is a little more put together than all the women around her, and she always had a vision for the way things were going to go — so that translates into the way she gets dressed. I like to create moodboards for what each character was looking up to for style cues and for her it was Rachel Zoe, Kimora Lee Simmons — women who were running businesses and had a very singular look at the time.

The fur coat has been talked about a lot.

We needed this iconic rooftop moment, but it really goes back to the fact that it's a symbol of inviting someone into your life and them feeling like someone's got their back for the first time in a very long time.

Where did you source your pieces?

What I discovered is that there is an underground network of people who produce pieces for the clubs, and so the more the girls let me into their world, the more I could reach out. There's a woman named Marcia who works solely by text — she designs pieces and has women bring them to the clubs. She really responds in real time to what the women want. There were so many mom and pop shops, so I worked with them too.

Has stripper wear changed much since 2007?

The biggest difference is that there used to be a lot more gowns — there were a ton of gown clubs in Manhattan where the girls would be in floor length gowns. It was very much that WWE Trumpian glamour, where everything was a gown with a slit up to the top and you'd have champagne. Around the crash, people really started to champion pole dancers and understanding the skills required of them. Gowns certainly don't showcase that technique.

How did you indicate a change in wealth status for these women?

My takeaway from the film was that when people who haven't had access to money first start to make it, you notice it in very visible ways — the branding changes, the logos are flashy. But the more you make, the more that goes away and the things you buy become abut financial security, like houses, and it's not as visible.

You said that the 2000s is undefinable right now because it's too close. What are some of the things you looked to create the aesthetic?

Related | Jacq the Stripper on Her Role Advising 'Hustlers'

How does the female POV of this film play into the costuming?

It was really important for me that you recognize that these women are in charge of their sexuality and they're using it as a tool. They know how to get what they want from a man using the tools given to them – their physicality, and how much or how little they are wearing.

What did you learn from the real strippers in the cast?

Jacqueline was a huge resource for me. I think for me, coming from a costume background, I assumed that there were hidden snaps, hook-and-eyes and quick things to take off, but in reality, it's all about stretching time and making things sexy.