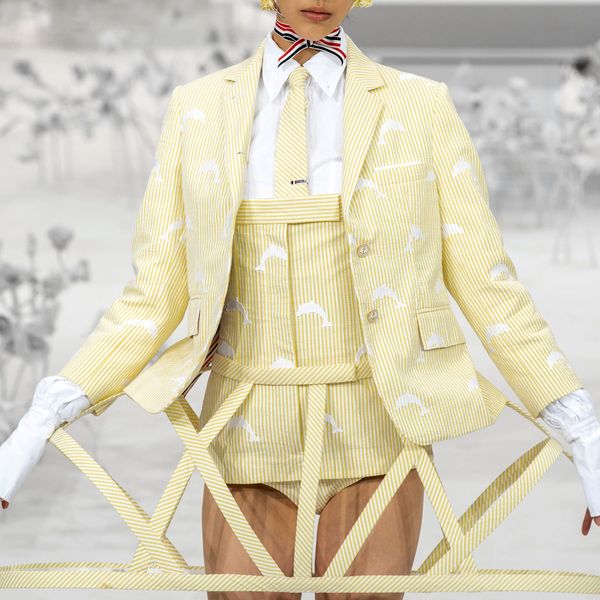 Why Are Hoop Skirts Everywhere?

But there is something to be said for true, overwhelming opulence. Over the weekend in Paris, designers embraced wealth as an aesthetic, something you could attribute to everything from the horse girls with shiny hair at Hedi Slimane's Celine to the giant hoop skirts that were featured at some of the most exciting and acclaimed shows of the month. Jonathan Anderson at Loewe, mad genius Thom Browne, and Demna Gvasalia at Balenciaga all showed variations on the hoop skirt for Spring 2020, a bit of French time travel back to the days before the 18th century's Reign of Terror. Like the pre-revolutionary French, we do live in a time of mass income inequality; people are always talking about guillotines and stuff on Twitter. The pannier is weirdly relevant!

As defined in The Dictionary of Fashion History, the pannier is "the French term for side hoops or false hips. The word was not used in England in the 18th century, hoop being preferred. In the late 19th and early 20th century it described a drapery style of the skirt or overskirt when bunched upon the hips, and could be spelt as 'pannier.'" The garment originated in the 17th century Spanish court (you can see them in Velázquez paintings), and was eventually popularized in France.

And so it makes sense that Anderson would reference the style at Loewe, a Spanish house. The entire collection drew inspiration from 17th century aristocracy, but his take on panniers was decidedly modern. The designer incorporated the side hoops on completely sheer, brightly-colored lace dresses with white, racer stripe-like trim, styled over what looked like athletic shorts. "I looked at the 16th and 17th centuries, where the craft was in the tiniest thing," he told Vogue. "Where you had to rely on precision."

At Browne's characteristically fantastical show, he showed panniers stripped naked, styled with preppy blazers. The designer described the look to WWD as "whoops, I forgot my pannier."

"Sometimes you look back at the history of clothing and ask why, but I almost took it at face value," Browne told WWD. "I just wanted to play with it and not make it so historical."

But even if he didn't want to talk about it, isn't it interesting that Browne showed panniers with seersucker and madras, garments that serve as shorthand for East Coast old money (he dubbed the collection "1980s Versailles")? Panniers, often associated with the excesses of the court of Marie Antoinette or the antebellum South, make a kind of perfect sense when paired with emblems of the Reagan-era ruling class.

The set for the Spring 2020 Balenciaga show was meant to evoke a parliament or ruling body of some kind, and the show notes said that the collection "reimagines dressing for work: power dressing, no matter what one does as a job." Gvasalia showed all kinds of uniforms: exaggerated suits and power dresses for the pundit types, tracksuits, logo t-shirts and giant parkas for disaffected youths who can afford to shop at Dover Street Market. And then there were the big showstoppers: enormous, bell-shaped gowns that bounced and jiggled down the runway, their silhouettes made huge with removable crinolines. They also referenced Spanish design and Velázquez.

"Ballroom dresses go back to the beginning of Balenciaga, when he started in Spain. It was mostly this type of silhouette he did, from Spanish painting," Gvasalia told Vogue. "But we wanted to make sure they're wearable. If you take out the crinoline, you have a sort of Goth dress to wear."

And sure, they feel a bit "Las Meninas," or, as WWD noted, like a child's view of a Disney princess. But the dresses also feel like parodies of ball gowns and garments for the very rich, like they took debutante dresses and swallowed them whole. The collection is so, so very now.