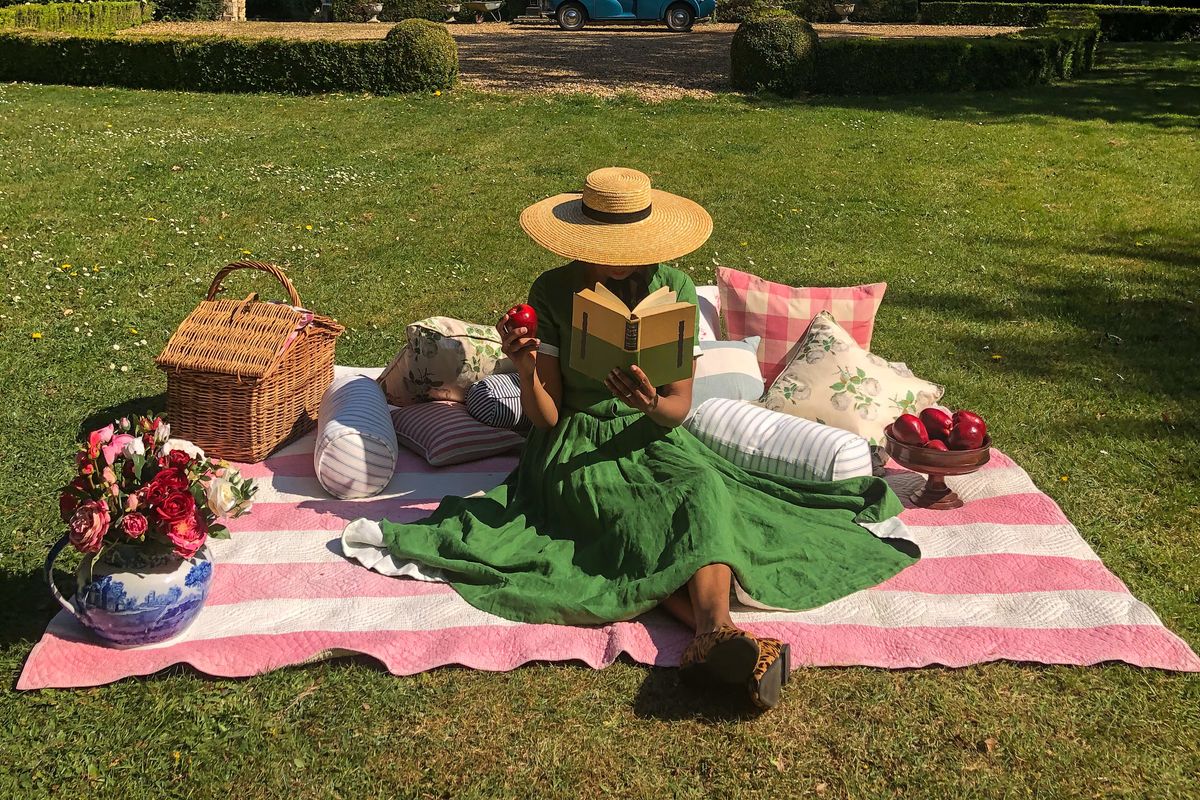 Aspiration without pretension: it's the high-wire balancing act every influencer hopes to achieve. 50-year-old Paula Sutton, a self-described "social recluse" who documents her quintessential English country home Hill House on her blog and Instagram, has managed it. Sutton's refined approach to the traditional has made her a design star, as well as a personality in her own right — something she says nobody, least of all herself, could have predicted.

Sutton's love of fashion started with magazines. "I remember when the very first issue of Elle UK came out — I was 16 years old and I was sitting on top of a red double-decker bus and I was so excited," she recalls. Her parents nonetheless discouraged her from pursuing a career in the industry, so she studied town planning and architecture instead. But after graduation she was sucked into the world once more, and started interning at fashion PR firms.

In the early '90s, she began meeting people in the modeling industry. The timing couldn't have been better, as the era of the supermodel began to take flight. "I was looking up to and admiring the Linda Evangelistas and the Naomi Campbells and the Christy Turlingtons of the world," she says. "And so it was almost like using them as a map, looking at those girls and thinking, 'well who are they represented by?' And in my mind I thought, 'Well you start there and then you cascade down.' It might not work. You might be turned away. But certainly that's where I'll start." Shortly thereafter, Sutton landed at Elite Premiere, the top agency at that time, starting as an intern and working her way into the press office and eventually to head of press. "My theory has always been that you try the top and if that doesn't work you go elsewhere," she adds. "I think a lot of people, what they don't realize is that if everyone is thinking that they're not quite good enough there's actually room at the top."

But then life happened. She married, gave birth to a son in 2001 and twin girls in 2003. Priorities changed, and suddenly late nights at the office spent troubleshooting beachfront locations for photoshoots became less unexciting. After five years of balancing a family and a job that kept her on call at all hours, Sutton decided that a change of lifestyle was in order. The family decided to pack up and head to Hill House.

The furniture and possessions from their London townhouse barely filled two rooms. But with no income coming in, buying new furniture simply wasn't an option. It was time to get inventive. Sutton started going to car boot sales, vintage markets and auction houses. "I started filling the house with all of this vintage stuff and then I learned to recover seats on my own and make cushions on my own and it was all very much a self-taught thing, purely to fill the house," she says. "So it was actually done very cheaply. The whole look of it is very established English country house style but that style has always been based on faded fabrics and overstuffed chairs. It's meant to look as though the stuff has been there for several generations. And that plays well into my aesthetic because I was buying things that weren't necessarily new, they were a bit faded, but it gave it that lovely luxe feel."

She knows what she likes the moment she spots it, a skill she developed through her time producing fashion shoots. "When you're helping the fashion editor pull things together your eye gets trained into knowing what will work well and the logistics of that. So even now I'll walk into a market and straight away I'm drawn to things. I never spend hours and hours anyway. I haven't got enough patience." This includes antiques and textiles that evoke a different era, solid, chunky furniture; something with a Queen Anne leg or a turned foot. "It has to have that hint of days of old or some past life."

She began blogging as a hobby while deciding where her career should go next. Then she noticed people posting on Instagram and thought the platform's visual-first approach would suit her love of interiors. "None of it was intended to become a career," she says. "I didn't know that that could happen. I didn't know that Instagram could be a thing. And I think in those early days, no one did really."

So began what Sutton refers to as the "hidden years," in which she photographed the house from behind the camera. "At that point my fashion was more about Welly boots and walking the dog in jeans and jumpers," she says. "I wasn't really the Paula that you see today. I was a lot shyer, because I was just unsure." The doll's house-like quality of the home quickly attracted attention, and her new followers wanted to know more about the woman who lived in it. Once a year, on her birthday, Sutton would appear in a photo on the page as a means of saying hello to the thousands of strangers following her. The reception was so positive that she slowly started featuring herself more and more.

Her fashion background suddenly came in handy. She has an eye for colorful dresses from Son de Flor and a quintessential English company called Cabbages & Roses. The clothes, she says, are meant to evoke a simple life: "I've never really been a sexy person. I'm not that. But I do love being well put together, red lipstick, I stick to a formula. I guess lady-like, I suppose. Although when I was younger I used to be in Dr. Martens the whole time. And I do like men's brogues. So it's lady-like, but with a men's brogue thrown on. And tweed. Lots of tweed."

Like many influencers before her, Sutton discovered that the algorithm favored faces. The more she posted photos of herself at Hill House, the more her following grew — and with that came negative attention. In late April, a British writer and editor tweeted that she was deleting Instagram, and that one of Sutton's posts had been the final straw. This move sparked immediate backlash: of all the women posting stylized photos of themselves on Instagram, why go after a Black woman in her 50s who enjoys a country lifestyle that's more stereotypically associated with Britain's white upper classes?

"It was an odd situation really," Sutton says now. "I don't really do Twitter. I remember one evening on a Friday. I had already reached something like 115K followers so I thought I was doing okay. And then suddenly I started seeing these numbers going up and up and up. And I'd look at my phone and five minutes later there would be an extra hundred people. And then 150. And so on. And you can tell when something's not right. You can tell something is happening. And it just didn't stop. It was relentless."

Related | Sidney Prawatyotin Is the King of Fashion Instagram

Sutton admits the attention was overwhelming. "I wouldn't go as far as saying that it was scary but it was overwhelming because you put yourself out on social media but it feels very controlled when you are doing it yourself," she says. "And the people who were following me tended to be people who were really into country houses or country interiors or the fashion that I was into. Often people of a certain age and it was all very safe feeling and almost like people you've chosen to be part of your home. And suddenly I was getting thousands and thousands of people and I didn't know who they were but they all knew who I was. It just seemed very exposed."

But from one negative comment came thousands of words of support for Sutton's unique brand of joy inducement. "I don't know if it's because of my age, but I've started to be called Auntie Paula," she says. "What this last few months has made me realize is just how many people love the whole process of a beautiful picture. One of the reasons I post so much in front of my house is because of the symmetry of the garden and the house and I think a lot of people just enjoy that kind of beauty, just a beautifully composed picture. It's not about me being beautiful. It's about the actual image being an attractive image. I'm not comparing myself to being in a gallery but it's why we get so much pleasure from looking at paintings and images like that: it's really allowed me to just let loose. And it brings a lot of joy to a lot of people so I'll push it even farther. It's all about enjoyment."

Sutton has felt a surge of confidence as a result of her new found fame. She might not resemble the often whitewashed or teen-centric world of cottagecore, but that's part of what's helping her stand out. There's plenty of room for everyone in the world of interiors — especially those who have as honed an eye as hers. "Until you become confident in yourself, stop caring about other people's standards of beauty, and really start believing in the beauty of your own quirks, your own imperfections and your own personal style, you'll never be truly at peace with yourself," she says. "Confidence is knowing that or course there are gorgeous supermodels out there to be admired, but believing that you have every right to stand tall next to them and be admired for your own individuality as well — regardless of age, shape, looks or ethnicity. Have fun, enjoy dressing up, be comfortable in your own skin, and don't be afraid to explore and experiment. Ultimately there's room for all of us, and how joyous is that!"